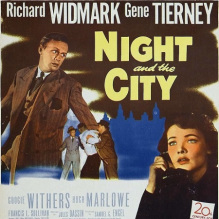 Episode 9: Night and the City (1950) & Michael J Buchanan-Dunne on the death of Freddie Mills

For episode nine, Dom was dragged down a dark Soho alleyway by writer, researcher, London tour-guide and host of the Murder Mile Podcast, Michael J-Buchanan-Dunne (hereafter known as “Mike”). Mike had death on his mind but thankfully it was one that took place back in 1965 – the mysterious and tragic demise of the boxer, Freddie Mills. Officially recorded as suicide, rumours have swirled around ever since that it was actually murder. But what does Mike think?

Freddie in his 1940s boxing heyday.

Freddie’s night club, behind which his body was found.

Staying with the theme of blokes fighting each other for money, we meet up with author, broadcaster and cultural theorist, Ken Hollings to discuss Jules Dassin‘s 1950 British Noir, Night and the City. It stars Richard Widmark as street hustler, Harry Fabien and Gene Tierney as his long suffering girlfriend. With stunning performances from Googie Withers, Francis L Sullivan & Herbert Lom, the film is a deep, dark dive into Soho’s seedier side in the austere post-war years.

Googie & Richard on the cover of Picturegoer, July 1950

Stream the version released in the UK here

And just for comparison’s sake, have a look at the version released in the US here

Buy tickets for one of Mike’s Murder Mile guided tours in Soho here, listen to his podcast here, follow him on Twitter here and book tickets to see him live on stage at Dingwalls in Camden here.