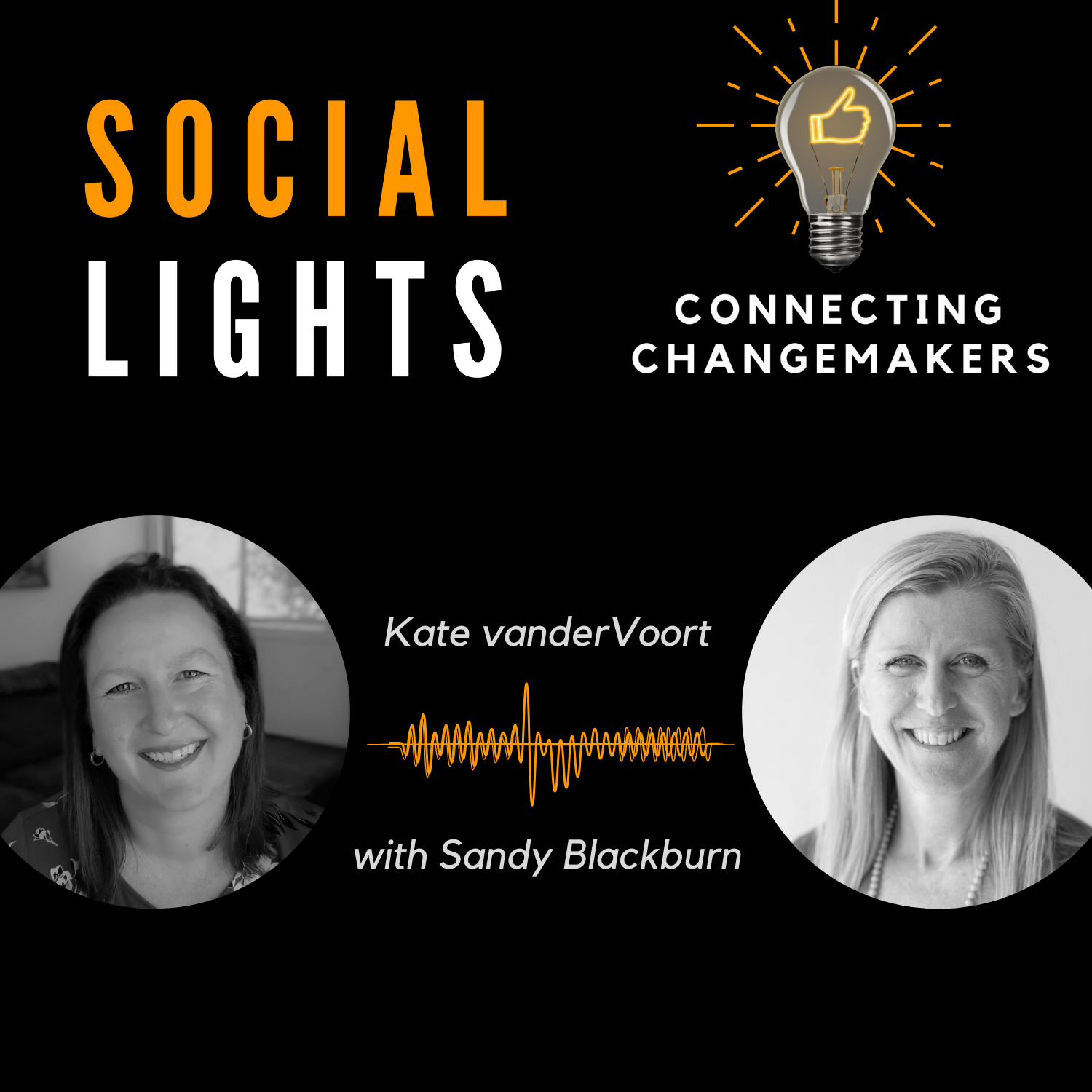 In this episode of the Social Lights Podcast, podcast host and Social Mediology founder Kate vanderVoort chats with Sandy Blackburn, Founder of Social Outcomes and Author of Holding Up the Sky.

About Sandy and Social Outcomes

Sandy works in the social impact space—and what lights her up day after day is thinking of better ways to do things in that space. Her superpower, according to her friends, is being able to see through walls. Give her information, and she’ll be able to sort through that information into a pattern that makes sense and turn it into a new strategy for an organization or a new way of thinking and measuring impact.

One principle that Sandy likes to live by is saying “yes” to things—especially when the opportunities to do interesting things arise. In 1988, she was given the opportunity to go straight out of university to live and work in South Africa—and she loved it so much that she spent the next 15 years of her life there. In this timeframe, Sandy learned how to do brave, large-scale, whole system social change work. She eventually moved back to Australia to spend time with her parents, and ended up working in the corporate world, spending almost a decade at Westpac.

According to Sandy, her time in South Africa was like earning a Master’s Degree in social change, and her time in Westpac was like doing an MBA. Her experience allowed her to bring together the social financial skillsets needed to set up Social Outcomes—an organization all about helping organizations to maximize impact. They do this through many means, from finding evidence-based designs that could work for how a program is run or how an organization is built and raising capital from impact investors to designing a contract with the government that makes the most of the outcomes and the impact that the organizations create.

“We’re seeing this shift where not for profits are starting to talk in that language of impact and outcomes.” (8:33)

There’s been a global shift of outcomes in the last ten years. Previously, when corporations and not for profit organizations alike talked about what they did, they would mostly talk about activity—and that’s not enough. This shift is massive. Instead of organizations talking about activities, now they have to talk about outcomes. When it comes to activities, funders and stakeholders ask questions such as “What happens as a result?” and “How are people helped by what you are doing?” Nowadays, the government has contracts that pay when they see desired outcomes—and not activities.

“Any program that’s worth its salt should research what works.” (24:57)

When it comes to putting money into an organization, the first thing you have to see is what happens to the money. For instance, how much money is being spent on admin? Good organizations should be spending on paying for their people, for their development, better processes, and their measuring outcomes. For good, evidence-based design, the questions that need to be asked is “What works?” and “What’s changing as a result?” If the organization can’t articulate it, put your money somewhere else.

Also, when you look at the evidence based around managing disasters, what you’ll see is that if an organization spends all the money in the first six months—then it’s another disaster, because people will need support for at least two years. Organizations need to drip feed it in for at least two years and not all at once, essentially using a chunk of money upfront but holding some back for supporting these communities later on.

“Look to see who else is doing something similar and go and have a conversation.” (36:30)

According to Sandy, whether the disaster is a bushfire or the loss of a loved one, the response of the people is wanting to do something—which is fantastic. Instead of starting an organization, however, Sandy wants to see more people thinking “How can I find an organization that I can latch into?” People should look for organizations already into existence—as that’s by far the better outcome compared to starting new things on their own. By partnering with an organization with the same shared values as them, it becomes so much easier than starting from scratch. By finding the right organization to team up with, a person’s energy and efforts will go ten times as far as it would have otherwise.

Sandy also advises change makers—“Finding a partner is a much better idea than going at it alone.” Go with an organization playing in the same space. “Find your family. Find your people.”

You can find Sandy Blackburn and more about Social Outcomes at: