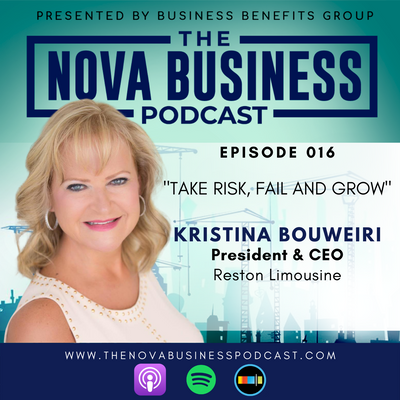 In this episode, we interview Kristina (Jacobsen) Bouweiri of Reston Limousine.

Kristina stands on her own as a force to be reckoned in the Luxury Limo and Transportation Industry for the DC Metro Area. She, along with Reston Limo are the winners of many prestigious awards, including Best Run Companies in Baltimore & DC, Top Women-Owned Businesses in DC, and more. Reston Limo remains the region’s largest luxury transportation provider. The Washington Business Journal named Kristina as one of the 50 most powerful and influential women in Washington.

In this interview Kristina shares her past, information on the current-state, and her future vision for not only herself and her business, but the region as a whole. Some of the topics include:

By the late 90’s, the company was firing on all cylinders. During this time, they won every government contract they bid on, but also had work with many of the dot-coms (including Ted Leonsis), propelling them from $200,000 per year in revenue to $5M in this time. When 9/11 hit, the music stopped, and Kristina began to look for alternative revenue streams to keep the business going.

Fast forward to today amid COVID-19, Kristina finds herself in a similar place, however she sees many silver linings, and a brighter future. Christina provides her insights her success, with something for many businesses to learn from.