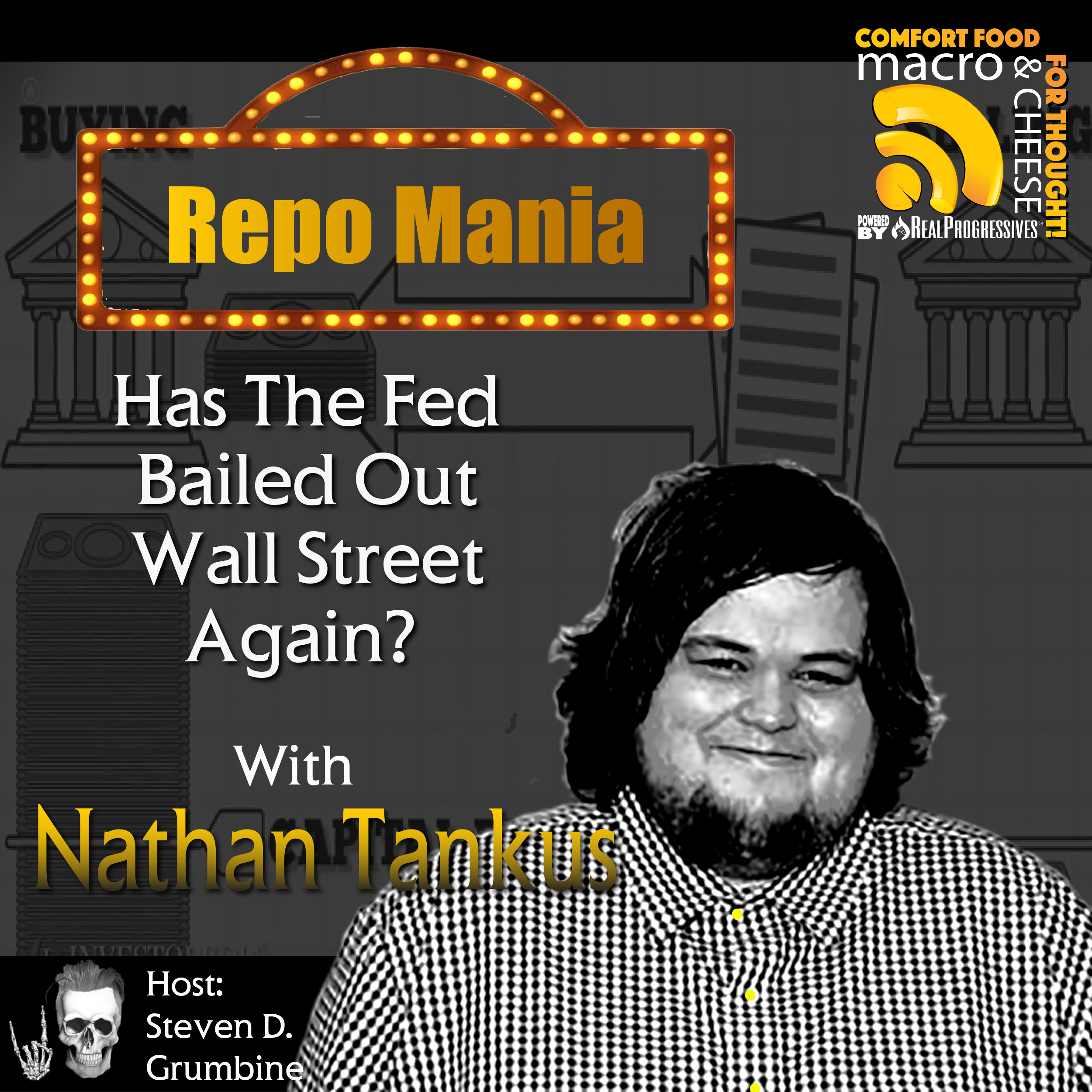 If you follow the financial press you’ve probably noticed some recent hysteria about the “repo market.” Since this involves the dealings of the Federal Reserve, it falls under our purview here at Macro ‘n Cheese. Because unraveling the strands of this dense subject requires someone more knowledgeable than we are, we called upon friend-of-the-podcast Nathan Tankus to help us out. Nathan is Research Director at Modern Money Network and can often be found on Twitter, educating the world about MMT.

“Repo” simply refers to the repurchase of bonds. Banks and bond traders sell Treasury bonds back to the Federal Reserve with the understanding that they (the banks) will buy them back the following day. As Nathan points out, this is always spoken of from the point of view of the central bank as buyer; it could just as well be called the resale market.

Why does this matter? Why do the banks sell back their Treasurys for such a brief period of time? When banks buy them back the price is higher due to the interest charged. So why do it at all? It turns out to be the mechanism by which banks ensure that they have enough balance reserves to ensure that their payments clear. To do this they need to deal with liquid assets, which can quickly be bought and sold and converted to "money" (or at least change the balance in their account). Nothing is more liquid than a Treasury bond.

See? Perhaps the banking industry isn’t just lawlessness and anarchy after all? Well, they certainly want us to believe the system is self-regulating so we won’t demand that the lawmakers rein them in and protect the public.

As Nathan explains it, concern about the repo market is much ado about nothing. The central bank has been doing these repurchase agreements since 1917 and during some periods they are a normal part of the Fed’s toolbox. But the 2008 financial crisis put a halt to the practice for a while. In response to the liquidity crisis (ie, the lack of liquid assets), the Fed created trillions of dollars of what most of us think of as bail-out money, which was distributed to all the banks. At that point, banks didn’t need to sell bonds to meet their reserve balances because they all had plenty. Thus, no need for repo.

When repo agreements started up again, some in the media thought that, since it hadn’t been done since 2008, it must be a sign that there’s a new crisis at hand. It doesn’t help that the FDIC, headed by Trump appointee Jelena McWilliams, is investigating the central bank, insisting that the repo market is actually another bank bailout by the Fed. Somehow, people have forgotten that these have historically been normal activities.

In this interview we learn the meaning of the liquidity trap -- and liquidity itself. We learn about settlement balances, quantitative easing, and overnight interest rates. We learn of regulations like Dodd-Frank and international banking agreements like Basel III. We learn how these things are connected to such far-flung historical events as Bretton Woods, the Yom Kippur War, and German postwar reparations. We learn why MMT economists have promoted a detailed understanding of monetary operations and argue that the banking system does not serve the public purpose. The next time you get spooked by a headline in the financial press, tune into this episode again. It all makes so much sense when explained by someone who knows what he’s talking about.