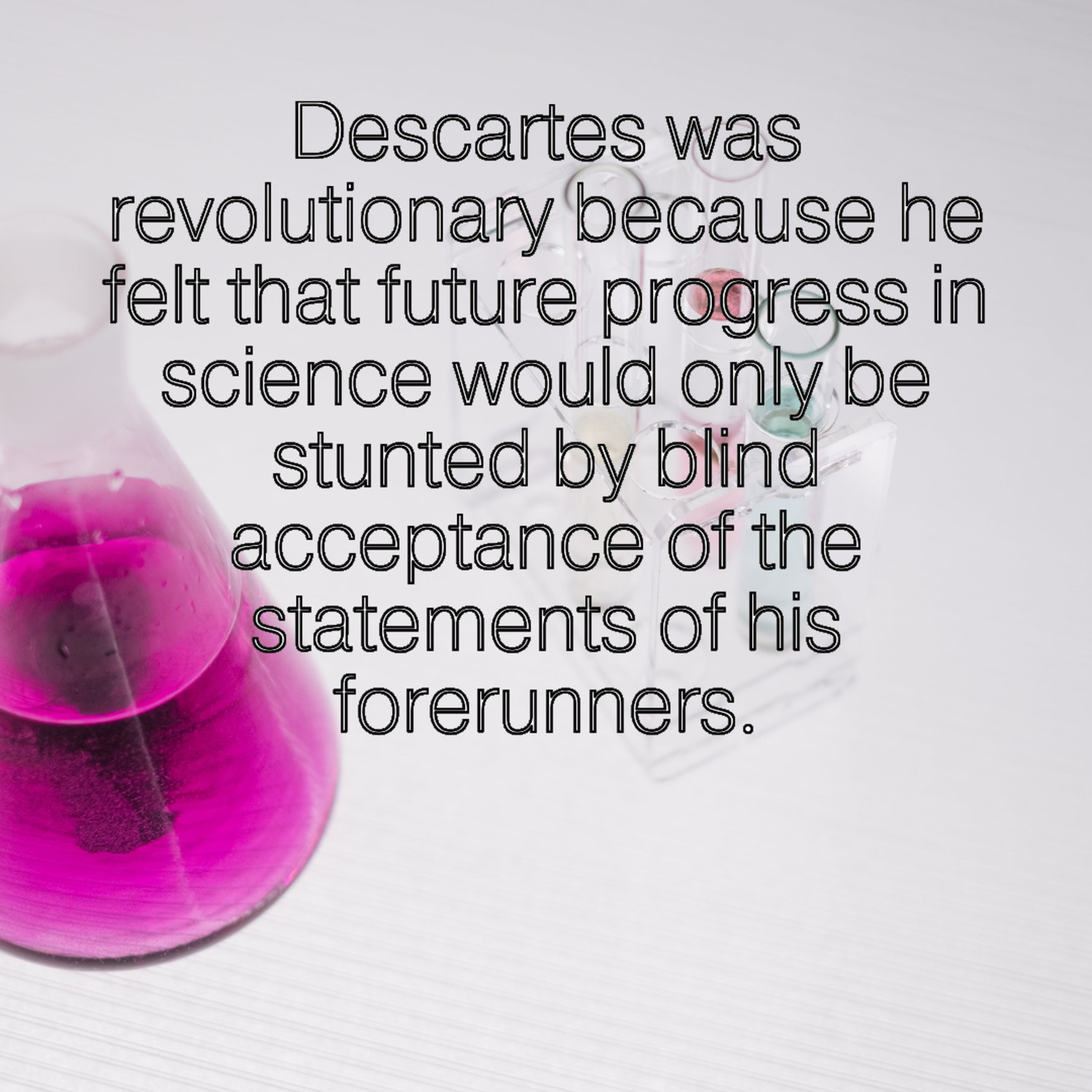 René Descartes is sometimes known as the father of modern philosophy, and sometimes as the father of the modern Scientific Method. It was his usage of doubt as a tool that led to his significance in both fields. He believed that deduction and direct observation was the only path to truth, and thus everything contained a degree of uncertainty which was not tested.

Descartes was revolutionary because he felt that future progress in science would only be stunted by blind acceptance of the statements of his forerunners (i.e., analogy thinking). Most scientific thought immediately before Descartes’ breakthroughs held firm to those old postulations, and he thought reliance on those old beliefs wasn’t going to help anyone understand the true nature of existence. He had no interest in taking those old precepts for granted and went about searching for a method to establish truth.

Sure, they had persisted for centuries, millennia sometimes, but surely the understanding of the world had evolved in the meantime. A prime example as aforementioned is the Copernican theory of heliocentrism (the Earth revolves around the sun), which defied the concept of geocentrism (the Earth was the center of the universe) that had existed since ancient Greece. It took nearly two thousand years for the theory of geocentrism to be adequately challenged and turned over. Treating untested things as truths was problematic, to say the least—and to Descartes, nearly everything was untested.

For Descartes, the only unchangeable truths were mathematic. There was no questioning the physical precepts math provided: two plus two will always equal four, in this universe and any other. The area of a rectangle will always be its height times its width, whether local priests disliked it or not. But other science at the time was still subject to certain beliefs that, for Descartes, weren’t quite established as fact.

What made them absolutely true without a shadow of a doubt? It turns out, not very much. So, in a burst of first principles thinking, Descartes sought a method to analyze evidence to arrive at solid truth.

“But I have convinced myself that there is absolutely nothing in the world, no sky, no earth, no minds, no bodies. Does it now follow that I too do not exist? No: if I convinced myself of something [or thought anything at all] then I certainly existed. But there is a deceiver of supreme power and cunning who is deliberately and constantly deceiving me. In that case I too undoubtedly exist, if he is deceiving me; and let him deceive me as much as he can, he will never bring it about that I am nothing so long as I think that I am something. So, after considering everything very thoroughly, I must finally conclude that the proposition, ‘I am, I exist,’ is necessarily true whenever it is put forward by me or conceived in my mind.”

It’s through that passage that you can truly see Descartes’ approach to truth. Deduction and direct observation was the only true path to knowledge, and everything else from perception, hearsay, and assumption must be torn down and re-examined.

The process he established is what has evolved into what we now refer to as the Scientific Method. It was the first model for systematically seeking truth. Descartes framed his method as a kind of cleansing. He firmly believed the antiquated methods used by his predecessors left too much uncertain. So he established the method as a way to not just eradicate errors and omissions, but to prevent the potential of such errors being made in the future.

He articulated a few of his main tenets and we can compare it to the modern version of the Scientific Method.

1. Never accept anything as true until you can see it with evidence. Or, to restate: doubt everything and eliminate certainty. Until you can confirm direct and unmistakable corroboration of a fact, don’t accept it—yet. Don’t rely on the past assertions by others if they weren’t arrived at through rigorous testing or examination. This rule also means suspending or eradicating all pre-existing attitudes and thought structures that make us jump to conclusions: prejudice, bias, snap judgments or lazy assumptions.

2. Divide every difficulty or problem into as many parts as possible. The complexity and complicated nature of a lot of problems can make analysis seem very intimidating, so Descartes advises dividing the problem up into smaller pieces. Rather than attack the problem in its massive, unified state, break it down into smaller pieces that you can handle more easily at once. Not only does it make it easier psychologically, you can be sure that you are proving the most basic truths you can find.

3. Start with the most easily understood problem, then take on the more difficult parts gradually. Take the most basic element of the problem, deduce to understand it completely, and then use that deduction to advance to the more difficult aspects. Use each conclusion that you’ve made to deduce the next one up. For unquestionable truth, you must ensure that each building block you use has been adequately proven. Descartes suggests this to make your thinking more methodical and organized, and to form a mental chain of evidence.

4. Bring all of the information together so it can’t be refuted. When you’ve finished the thorough and systematic examination and come to understand the individual truths of your problem, synthesize all the elements and present them compellingly. Make sure to show that you didn’t overlook or omit anything, that no variable or exception went unexamined, and that your conclusions are based on ruthless rationality, and even take into account all the attacks and doubts. As your algebra teacher told you, “show your work.”

A notable part of Descartes’ method involves his approach to doubt in the first step. By discarding everything that couldn’t be established as true through unquestionable evidence, he was rejecting some beliefs that were, in fact, quite true. They just couldn’t be absolutely verified by the scientific processes that had been used in the past. But Descartes was confident that by deconstructing all the parts of the problem and reconstituting them through his new method, those truths would emerge again—but this time with hard evidence to back them up.

The modern Scientific Method similarly restricts instinctive thinking and forces one to adhere only to the elements that are proven. Not much has changed over the years. Typically, it consists of five steps:

What is the question you are trying to answer?

What is your hypothesis about the answer to that question?

Perform an experiment to test your hypothesis and find an indisputable answer. To this end, most modern experiments use what is known as double blind testing, which involves the experimenters themselves not knowing who has been subjected to what conditions to prevent subconscious confirmation bias.

Observe and analyze the results of the experiment.

Make a conclusion about whether your hypothesis was proven correct or wrong.

An intriguing sidebar to Descartes’ innovation was his understanding of human nature—that in addition to being built for rational discourse, we are still only animals. We do a lot of things for survival that fill certain needs that aren’t easily broken down by the method. Pursuing the truth with rigor and dedication is great and all, but you still have to eat, sleep, have a social life and hopefully a romantic partner. These are human needs that you can’t always deduce through dedicated scientific reasoning.

You can’t do any of those things if you live every part of your life by Descartes’ rule of doubting everything. Human needs are built on our personal responses and desires, which are just as real to us as established truths. Descartes recognized leading a full, healthy life meant we had to accept these ethereal or visceral needs, and not subject them to the method. So he suggested being a human first—with occasional breaks to plumb the deeper truths of science and reality.