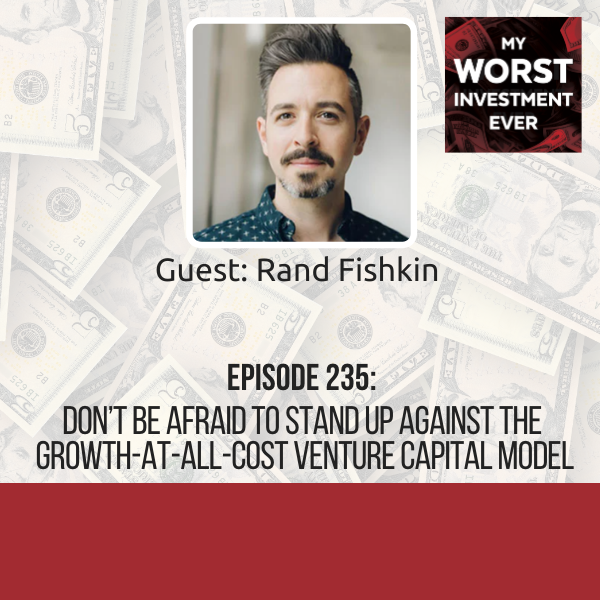 Rand Fishkin is CEO & co-founder of SparkToro, author of Lost and Founder: A Painfully Honest Field Guide to the Startup World, and previously co-founded and ran Moz.

Since publishing his book in 2018, he has earned 4.7 stars out of 5 from 170 reviews, a remarkable achievement!

“Find something you’re passionate about, where you can add unique value, and where your audience wants to pay attention. Nail those three, and you’ll do great marketing.”

Rand’s worst investment ever happened when he was the CEO of Moz. In 2011, the company turned down an acquisition offer from HubSpot, a very well known marketing platform. At the time, Moz had been growing at 100% year-on-year for about six years in a row and producing about $11 million in revenue.

In 2012, Moz sought to increase funding and got $18 million, of which $15 million came from a new investor, Foundry group, and $3 million of it came from a previous investor Ignition Partners.

Venturing into more forms of marketing

Cutting off what was working

Over the next few years, the company cut off all growth of its software platform. As a result, existing products stopped improving and staggered. While their competitors kept making investments, Rand was pouring all of his new money into hiring a huge team, trying to figure out the new management structures, growing his offices, and acquiring other companies.

Rand thought that by putting on hold what was previously working and putting all his energy into launching his new idea, the new venture would propel Moz into superstardom with this exciting and incredibly broad software suite.

The new venture fell flat on Rand’s face. Moz’s growth rate fell from 100% year-on-year to 50% and then from 50% to 25%. Over the years, Moz continued to plateau in terms of growth and was surpassed by two direct competitors – SEMrush and Ahrefs.

Over the last few years, Moz has tried to recover and refocused on SEO after a big round of layoffs in 2016.

While the company was still profitable, the failure put a massive strain on the company and Rand. He was not able to handle it well and had an emotional breakdown. Rand ended up stepping down from the company, replacing himself with the chief operating officer who’s still the CEO today at Moz.

The myth that leads even the best of us to failure

Rand’s biggest driver to his failure was believing in the myth that once you have invested, made a decision, and gone down a path, you have to keep pursuing that path until you see it through to determine whether it was the right decision or the wrong decision.

In reality, the right thing to do is to release one small thing that puts you in this direction and see if that works. And then another little thing in the same direction and if it also works launch another. Don’t do anything big until you’ve released a small series of things and validate that your market wants this.

Have structure and incentives in place

Structure and incentives matter more than almost everything else when it comes to business success.

Know what you’re signing up for before accepting venture capital

VC financing comes with a lot of glitz and glamor, and you get a lot of media attention. Don’t fall into the trap of chasing the glamor at the expense of serving your customers, your employees, and your happiness.

Today, there are financing models in between being wholly bootstrapped trying to build a business with your own or your family’s funds and building a business with institutional investor capital. Don’t be afraid to explore such models.

You can’t do everything

Don’t be addicted to growth, and try to do everything. Things seem easier on paper than they are. Companies just can’t do everything.

The startup world is a trap

Small businesses are trapped. So be very careful when you go in. You can have all the dreams that you want, have a billion-dollar company, but for the majority of people, it’s pain and despair.

Leave risk management to the board

As the CEO, your job is growing the business while that of the board is reducing risk. When a board gets caught up in growth, they betray their obligation to the bigger world. Let the CEO in the management team propose the growth plan while the board handles the risks. All board members should, therefore, understand the role of risk assessment and risk management.

Do not let investors push you

Listen to different opinions, but do what’s right for you. Do not be dragged into hitting quarterly profit numbers and all that. Don’t be the CEO who spends time building a competitive advantage and chasing your tail because investors are pushing you.

When looking for business financing, be sure to recognize what you’re signing up for and commit wholeheartedly to one path. So if venture capital appeals to you, just understand why to make sure it’s the best choice for your business.

Rand’s number one goal for the next 12 months is profitability. SparkToro just launched, and so Rand’s main focus right now is trying to get it to a profitable, sustainable business.