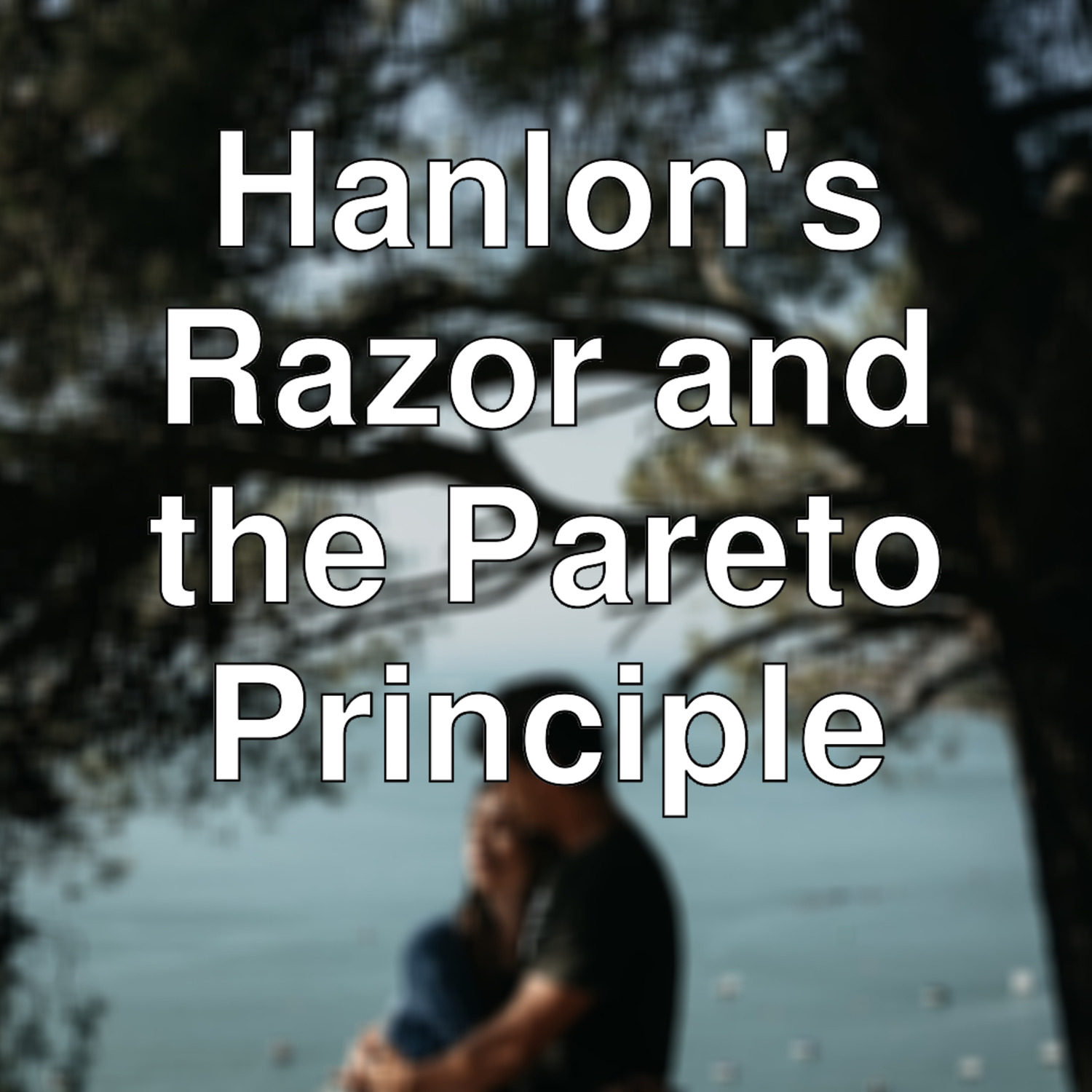 Mental Model #26: Hanlon's Razor: Malicious acts are far more likely to be explained by incompetence, stupidity, or neglect; assumptions about one's intentions are likely to be wrong. Improve your relationships by giving the benefit of the doubt and assuming, at worst, absent-mindedness. Mental Model #27: Pareto Principle: There is a natural distribution that tends to occur, where 20% of the actions we take are responsible for 80% of the results; thus, we should focus on the 20% for maximum input-to-output ratio. This is in the name of becoming results-driven and simply following what the data is telling you. This is not about cutting corners; it is about understanding what causes an impact.

Use to explain actions by giving others the benefit of the doubt.

Though the world is complex, it often works out in simplistic and direct ways. That's what Occam's Razor encourages, and Hanlon's Razor does the same in a slightly different way.

So how does this relate to Occam's Razor and the preference for simple explanations with as few variables as possible? Because making assumptions about someone's intentions and motivations based on their actions is, well, a rather large assumption. The most likely cause for malice, or any other negative intention, is neglect or incompetence.

In other words, it's easier for a person to do something negative out of neglect or incompetence, and it takes another few steps to truly be able to say that malice is the cause. Being that we are not a species with psychic powers, we will never know people's intentions.

This mental model assumes simplicity in the realm of social interaction. If you presume that people only want to be good to you, it has the power to massively improve your relationships.

Suppose that you want a particular brand of cereal at the grocery store, yet someone two feet in front of you grabs the last box. You are feeling cheeky and angry enough to confront them about it, and so you exclaim, "Do you know how much I wanted that? You're so inconsiderate!" They never even turn around. Later, you discover while watching them in the checkout lane that they are actually deaf and didn't hear your words.

Cue feeling like a fool. You've just created anxiety and rage in a situation where it didn't need to exist. You could have kept your cool and let things roll off your back, but you didn't. Hanlon's Razor forces you to take your offended ego out of a situation and analyze it with everyone's best intentions in mind. People are oblivious and thoughtless at times, including you, but it usually doesn't mean what you think it means. Empathy is a mental model in itself.

And yet, this doesn't mean we should lower our guards. When you apply this mental model to everything and everyone, you gain a type of blindness to malice. That's dangerous - the person walking behind you late at night, following you after five turns, is likely not doing so out of neglect or incompetence.

Use to find where your time and resources will create the biggest impact.

I can distinctly remember when I first began writing more and more. I spent a lot of time spinning my wheels on things that ultimately didn't matter, though I didn't know it at the time. This can easily spiral into perfectionism and analysis paralysis, and I was no exception.

Because I felt incredibly invested and wanted to impart as much value as possible, I spent an inordinate amount of time on small changes and edits that no one besides me would ever notice. I suppose my heart was in the right place, but that's not what makes a business succeed.

The overall message and effectiveness were largely the same, but I would rework sentences over and over until I was satisfied with them. Consequently, it took almost a year to write and edit my first book. This isn't to say that quality control isn't important. However, I now realize there's no sense in agonizing over every word choice in a book, especially if the overall message and effectiveness will not change or be improved. What matters in a book, anyway? In fiction, the plot and characters. In non-fiction, clear lessons. In any case, not what I was spending all of my time on. In any pursuit, only a few things really make the difference, and tinkering with the tiny things is usually a worthless pursuit.

The primary reason for this is the 80/20 rule, otherwise known as the Pareto Principle, our eponymous law turned mental model.

The Pareto Principle was named for an Italian economist who accurately noted that 80% of the real estate in Italy was owned by only 20% of the population. He began to wonder if the same kind of distribution applied to other aspects of life. In fact, he was correct.

The Pareto Principle applies to everything about the human experience: our work, relationships, career, grades, hobbies, and interests. Most things follow a Pareto distribution, where there is a fairly skewed ratio between input and output. It's about finding the best bang for your buck.

* 80% of the results you want out of a task will be produced by 20% of your activities and efforts directed toward it.

In a way, this is related to a mental model from an earlier chapter on diminishing returns. The more you spend above 20% on something, the more your returns will diminish. Thus, unless you have an extremely clear goal to bring something to optimal performance or efficiency, you should just focus on that specific 20% rather than the other 80% of tasks.

This mental model has one simple proposition and lesson: identify the 20% input that generates the 80% output in an area you are seeking to improve and focus on that. Don't try to do everything at once; just focus on what actually moves the needle and creates more of the result you want.

For instance, if you set a goal of trying to lose weight, you will lose 80% of the weight by just doing 20% of the actions you think you should, such as drinking more water to combat feelings of hunger and hitting the gym three times a week. Everything else, like counting every calorie, lugging around Tupperware filled with broccoli and chicken, going on crash diets, sweating off weight in saunas - that's the 80% effort that will only create 20% of the results. Therefore, focus on doing those 20% actions as best you can, and ignore the rest. Engaging in those 80% actions is fairly useless unless you want to become a fitness model.

If your business sells a range of products but 80% of the sales comes from a small subset of Mickey Mouse-themed products, what do you think you should do? Probably drop the other products and expand on the Mickey Mouse products.

Tasks that you think make a difference actually don't - not to your bottom line, not to your end result, and not to the people you fear judgment from. Those tasks amount to trivialities, similar to what we'll cover soon in MM #30. The aim is not to cut corners, but rather to maximizing efficiency.

The Pareto Principle is a mental model that encourages efficiency and the greatest ratio of input to output. What are the tasks that make the biggest impact, regardless of details or completion? Do those first and foremost - they might adequate for your purposes. Become results-driven and don't get caught up in what doesn't matter.