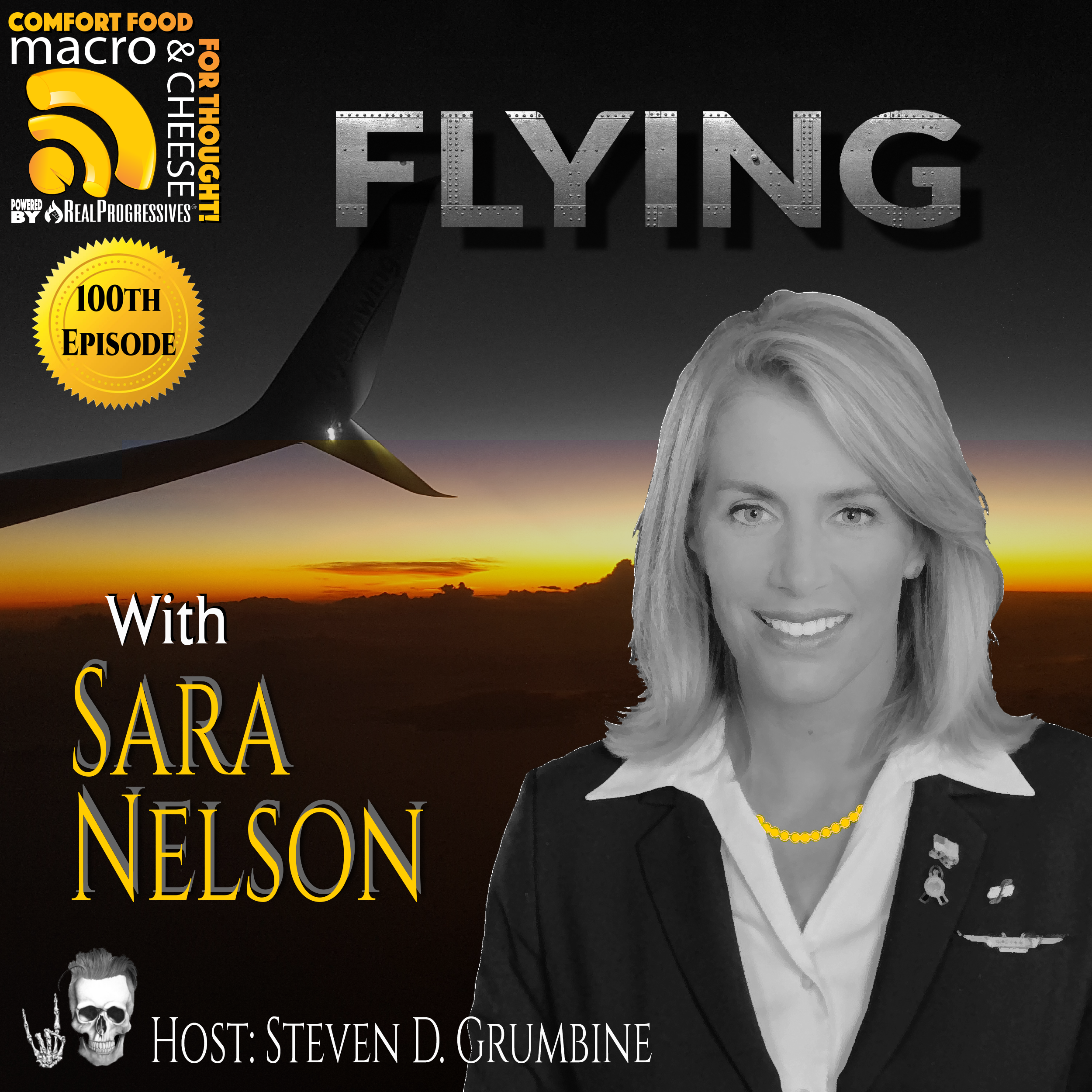 Happy 100th!
To our supporters, both old and new,Thank you for making this podcast a success exceeding our expectations.

For the story of Macro N Cheese and our 100th episode, please check out the “Extras” section on the episode web page.  realprogressives.org/podcast_episode/episode-100-flying-with-sara-nelson

Sara Nelson is a labor leader with MMT bullets in her bandolier. She’s practical, wise, and filled with compassion for the workers she represents and those she doesn’t. She joins us fresh on the heels of another victory, celebrating the passage of the latest Covid-19 relief bill while admitting it’s not perfect.

She explains that her union’s strategy requires a multi-pronged attack and its success manifests on multiple fronts. They could only prevail because they are organized. Their battle began long before they arrived at the legislative process. They had already fought through the early rounds.

We brought capital to the demands. OK? … This is organizing in the workplace and saying capital is going to be disrupted if you don't work with us. So bringing our airlines to this political process was what made all the difference. And that's only possible if we organize in mass numbers and build that kind of power in the workplace because the only thing that is going to move people is if you actually move capital.

Steve and Sara discuss the power derived from penetrating the deficit myth, pulling back the curtain, and laying bare the lie of austerity. They talk about the 1912 textile workers’ demand for “bread and roses” and how it’s as vital now as it was then. The recent rebirth of the strike in this country is resulting in unexpected and transformative outcomes.

Look at the Chicago teachers who lifted tens of thousands of people out of poverty with that strike. Life-changing. Right? Got nurses in the schools so that parents who are working two and three jobs to survive and don't understand why their child is having such a hard time at school. And now there's a nurse to say, you know, your child's having a hard time hearing and we just need to get them a hearing aid and all of a sudden that child can participate. And the parents, you know, I mean, can you imagine that? Can you imagine the difference this makes in people's lives? But those are the results that we can get by organizing.

Sara Nelson is the International President of the Association of Flight Attendants-CWA, AFL-CIO. She worked to secure federal payroll grants to keep aviation workers employed and connected to healthcare during the coronavirus pandemic while banning stock buybacks and capping executive compensation. The program was extended in the emergency relief bill on December 21st.