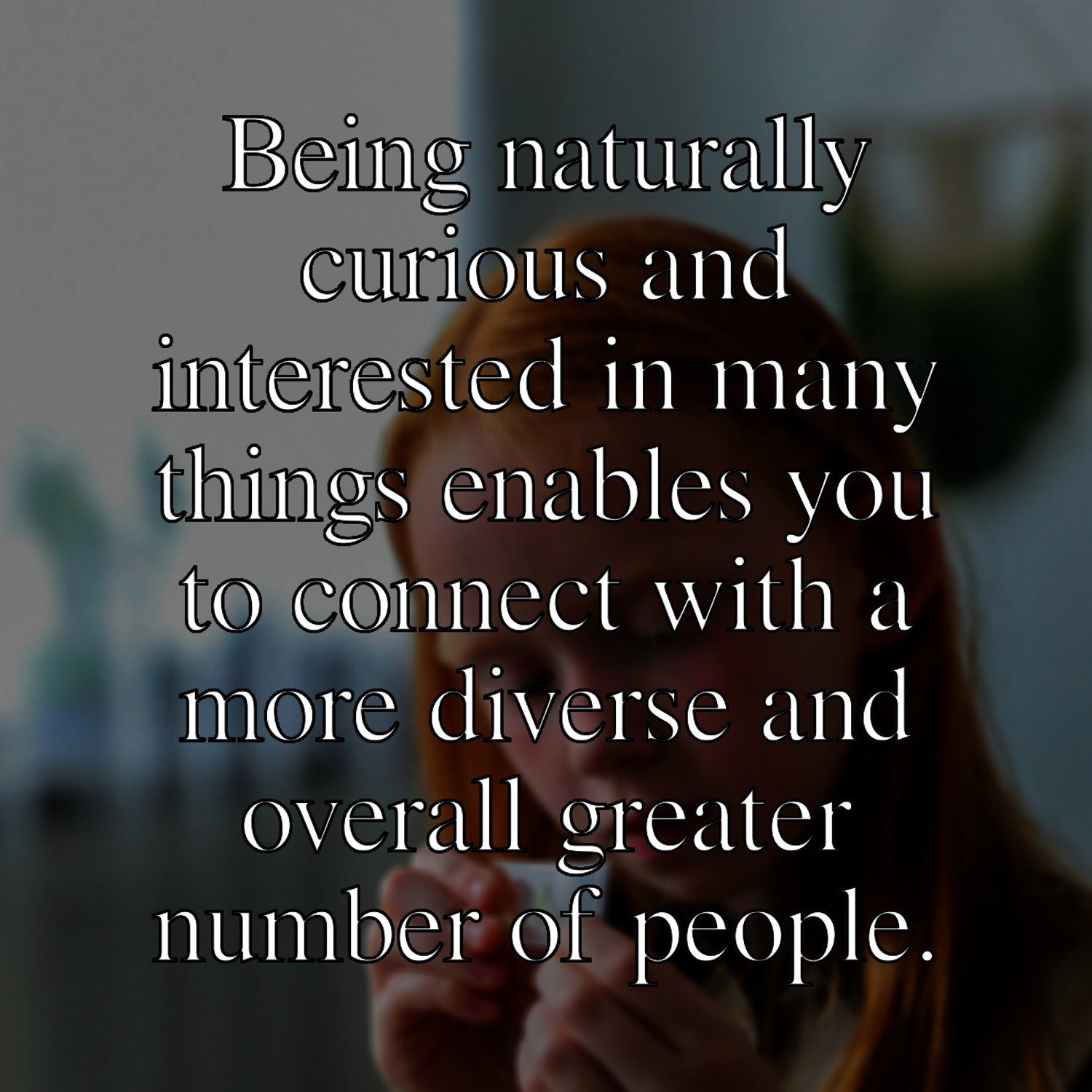 Suppose that you’re an American who has never really cared much for soccer, but you’re going to be moving to a country in Europe or South America where soccer is a big deal. You might still find the sport itself boring, but learning about it and developing an interest can give you an easy conversation starter with a massive percentage of the population in your new home. You’ll find it much easier to make friends in any situation if you can talk to people about the things they’re passionate about. The goal is to find common ground, even when that takes some effort.

Once the initial similarity is established, you simply stand a far better chance of overall social acceptance, and sometimes that is all we can hope for.

So what can you do in order to take advantage of this knowledge?

The obvious answer is to emphasize your similarities and downplay your differences as much as possible when you interact with people. Some of your relationships may be deep and span a wide range of mutual interests, while others might hinge on one or two shared traits or hobbies. Whatever the case may be, you’ll maximize your social success by focusing on what you have in common with people.

Dig for similarities and find them—they exist in all types of human pairings, you just have to know where to look or how to create them.

Suppose that you’re an American who has never really cared much for soccer, but you’re going to be moving to a country in Europe or South America where soccer is a big deal. You might still find the sport itself boring, but learning about it and developing an interest can give you an easy conversation starter with a massive percentage of the population in your new home. You’ll find it much easier to make friends in any situation if you can talk to people about the things they’re passionate about. The goal is to find common ground, even when that takes some effort.

Once the initial similarity is established, you simply stand a far better chance of overall social acceptance, and sometimes that is all we can hope for.

On that note, being naturally curious and interested in many things enables you to connect with a more diverse and overall greater number of people. If you spend all of your free time watching TV, you won’t have the same ability or number of opportunities to connect with others as somebody who has a lot of hobbies and interests that they actively pursue in their free time. You can make yourself more interesting just by being more interested.

Looking for similarities complements people’s tendency to be self-absorbed. Let people talk about themselves. Let them brag to their heart’s desire! Be a curious listener, and as you listen, you can develop an understanding for what shared traits and interests make you closer with any given individual, and which ones will separate you. Focus on the positives you share with people as you allow them to express their thoughts and feelings to you, and you’ll develop many successful relationships as a result.

What do you look for in your friends? Is it someone to keep you company? Someone who shares interests with you and enjoys the same activities? It may very well be all of these things, but a study done by psychologists has concluded that we choose our friends based on an unconscious notion that they will support us in our times of need. This is about making bad times better, versus making good times great.

The study, performed by cognitive psychologists Peter DeScioli and Robert Kurzban, researched the cause of human friendships. The researchers asked the participants a number of questions where they ranked their closest friends in several ways, such as the benefits they receive from the friendship, the number of secrets shared, and how long the friendship had been ongoing.

The results concluded that people perceive their friendships as “deeper” depending on how they think that person can support them in potential conflicts. These can be trivial arguments to violent fights, or they can be more internal issues, such as supporting your path in life. So you are more likely to consider someone a good friend if they can do things for you, and bring some sort of value to the table in terms of conflict resolution, protection, or opening career doors.

This is also true for the reverse. If you don’t think someone can do much for you or assist you in any way, then you will rank them lower, regardless of how well you get along or how great a time you have together. This is because you do not see them as someone who will be an ally in your time of need, when you face challenges or find yourself in dangerous situations. In the end, it is still a matter of reciprocity between two people.

We revisit a common theme: from an evolutionary standpoint, it is not difficult to understand why we would have this bias. Thousands of years ago, life was very uncertain as compared to now, and this was reflected in the way relationships were formed and how and why people were valued.

To survive back then required having the right kind of information at the time when you needed it. It was also all about cooperation; meaning, we all needed to socialize and work together in one way or another to make it through. If you knew someone could protect you, tell you the best place to harvest plants or to hunt a large animal, they would be much more important to you than the person who relied on you but gave nothing in return.

In ancient times, if certain people didn’t have the built-in tendency to make allies, they tended not to pass on their genes. Why? Because they were less likely to survive, whether it was when they faced the next winter or came up against predatory animals. It can be argued that our tendency to size people up based on how they can benefit us both as allies and as close friends is hardwired into our DNA. It just doesn’t make sense to give someone your friendship while getting nothing in return.

But when we’re thinking of our likeability and our modern friendships, how can this knowledge help?

Though we are not cavemen anymore, we retain that same mentality that we need people around us who can benefit our lives in some way. After all, while our present circumstances may be very different nowadays, we all still need each other to make it through every day.

Understanding this nature of interpersonal friendship is key to the path of succeeding socially. You can easily use this information to your advantage by proving to those around you that you bring something to the table, and will carry your own weight in the relationship. Making this clear to others offers reassurance that you are a reliable helping hand in times of need. This will bring people closer to you. But people wouldn’t have any idea unless they are aware of it and feel it too. To make sure they know this, you need to communicate your value, whether it is in a verbal or non-verbal way.

For example, in a networking environment, there’s nothing wrong with telling people that you’re connected to a big corporation or governmental structure that they can benefit from. You don’t need to spell it out in an obvious way—actually, you should never do so. That can seem cocky or arrogant; off-putting to say it mildly. You just need to lay out the facts and let people reach their own conclusion that you can benefit and support them.

Maybe the benefit is in the form of a job. Maybe the benefit can even be somewhat intangible, like social status. Whatever the case may be, when you make it clear to people that there is some sort of advantage to knowing you, they will be more likely to consider you an ally.

Once they believe this, you will instantly be more likeable, for the sole fact that they will believe you are helpful and that you can offer them something others can’t. It sounds very transactional, and maybe it is, but there’s no denying that nobody wants or needs a friend who constantly needs support but gives none in return. Perhaps thinking of it that way is putting reciprocity and mutuality in a practical and realistic frame. Moreover, a transactional relationship can be, in a sense, a metaphor. It doesn’t have to be something quantifiable. You don’t need to offer monetary gain; sometimes encouragement, humor, entertainment, or advice can work just as well.

In terms of communication, keep in mind that it is a thin tightrope between stating your potential value and just bragging about it. Nobody appreciates someone who overestimates their worth or tries to show off. What is important is letting people know that you are willing to be on their side and help them in any number of ways, without trying to overstate your importance.

It isn’t always about telling everyone that you have certain friends or a certain amount of money. Different people want different things, and it is important to remember that just because someone may be interested in a career-related boost doesn’t mean that another person desires the same. Maybe this person is more interested in personal development and needs someone to help them keep focus.

Sometimes you need to be strategic in targeting your friends. If you know that someone can offer you something that nobody else can, or if you know that you can enjoy a mutually beneficial relationship with someone, approach them and see where it goes. The main idea is that the more useful you seem, the more likeable you are, and the more likeable you are, the more you can develop mutually beneficial relationships.

We, as humans, are compelled to create close bonds because we want to be heard and have somebody to rely on in times of need. Friendship, as scientific research has shown, is forged by sharing similarities and mutual exchange. No good relationships last without these two key ingredients.

On one hand, what the studies have found is that humans seem, in general, selfish and self-absorbed. The path toward social success could then sound one-sided and self-serving. However, what these studies also tell us about ourselves is that we are all of the same nature.