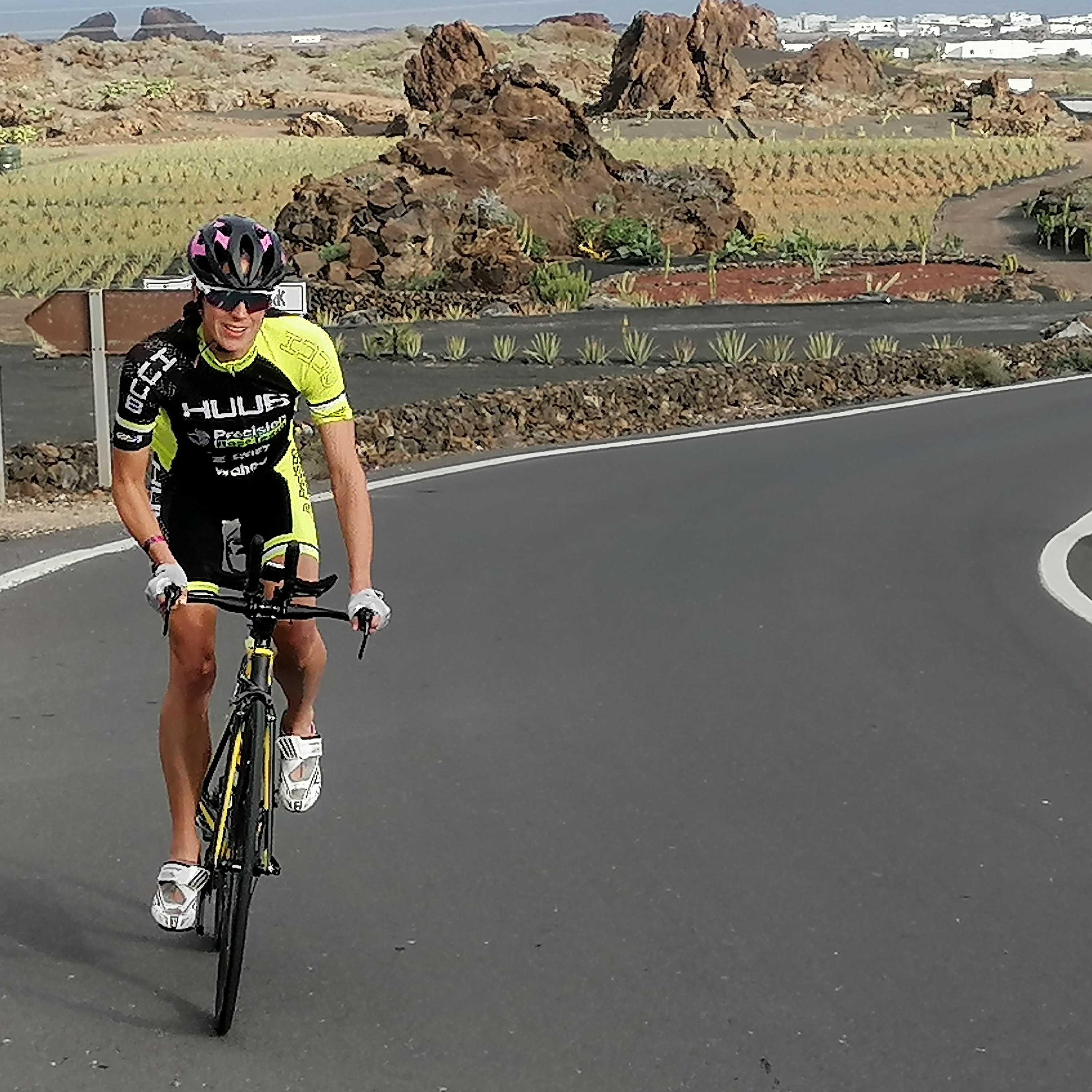 This is the inspirational story of a British triathlon legend, Helen Jenkins.

Helen is a 2x ITU World Champion and 3x Olympian and is preparing to make her middle distance debut at Ironman 70.3 Dubai in February.

Over the last four years, Helen has had 2 children, but she also feared her triathlon career would be over for ever when she had intensive back surgery in 2018.

I think you'll love the interview, as Helen is really relaxed, funny and brings a refreshing perspective to life as a professional triathlete.

*How she has come to terms with the disappointment of finishing 5th at the London Olympics, when she was one of the favourites to take the win

*Why listening to your OWN body is the best piece of advice for new mums and mums-to-be.

* If she'll be signing up for Ironman Wales any time soon

If you liked this episode please share it with a friend and get involved on social media, by following Inside Tri Show on Twitter and Instagram and commenting on/sharing posts.

Who is Helen Murray?

It's a good question! Head over to her website and you'll find all you need to know.

Listen to the recent interview Helen did with Tri Oraklet here: https://soundcloud.com/tri-oraklet/helen-murray-inside-tri-show

SUPPORT THE SHOW BY LEAVING A REVIEW AND SHARING IT

Please support the show by leaving a review and sharing it with a friend.

To help me to continue to bring you the best interviews in triathlon every week, I’d love you to become a patreon and buy me a coffee every so often.

This week's show is powered by 33 Fuel whose Ultimate Daily Greens has just been awarded Best Health Product of 2019 by Runner's World magazine.  Use the code INSIDETRI33 for a discount at checkout at www.33fuel.com.

FRIEND OF THE SHOW

Komfuel - like a pic' n mix of sports nutrition through your letterbox! Pick n Mix from your favourite sports nutrition brands, buy in bulk or in the quantities you want to create your own fuel pack delivered straight to your door from Komfuel. Listeners can get 20% off all orders or advance sweat tests using the code: INSIDETRI at www.komfuel.co.uk

Mixture of nerves and excitement about racing for the first time since September 2016.

"I know I’m nowhere near the levels of where I was when I was qualifying for the Olympics or winning a World Triathlon series, I’ve just not had enough time, but I’ve been training since Max was a month old , so in 7 months, and I am happy with where I have got to."

01.15 I had to commit to a goal, I had to commit to something. I was just training and doing bits and and pieces. Without a goal, say the kids had had a rough night and I was tired, I’d be like ‘ah, I won’t go swimming this morning’ but with that goal, I have to go and do it.

01.50 I’m nervous about the distance and where my fitness is. I stopped training with Max at 16 weeks and I literally did half an hour a day and it wasn’t every day and I just don’t know where I am in terms of fitness.

03.30 Did you think you would ever get on the start line again?

No, not really.  After the Rio Olympics, I had Mali and then the intention was to get back after I had her. But I got back into training and I was really struggling with my back. I went for an hour run one day and then I could’t walk for a week. So I had the back surgery, and I was probably never going to race again. After the surgery, I thought I’d try to get back and see what happened, but it wasn’t great. It was the swimming actually, I couldn’t tumble turn. So we decided to have Max. Throughout the pregnancy in my head I was thinking my back isn’t going to be good enough again and I wasn’t really intending to do anything, so I just started to ride on Zwift and got fit really quickly and once you start feeling that fitness coming back, the motivation comes and I thought if I don’t try now, it won’t happen, so just do it and see what happens.

08.00 I message Nicola (Spirig) occasionally and she had to train pretty hard through her third pregnancy and it’s an inspiration to other mothers. But at the same time, there is no way I could have done a high level of exercise throughout my second pregnancy. The stories are inspiring, but use it as inspiration not comparison.  Listen to your body is the biggest piece of advice and after pregnancy I saw a physio who specialises in how to re-engage the core and it’s doing what you can. Sometimes I don’t feel like going training and after a busy day with the kids, I think ‘oh, I don’t even want to go out of the house again’ but you will feel better for doing it.

12.15 I’ve never been a high volume athlete. Mostly I would do 23-25hrs a week. With my body I just haven’t been able to take that volume. I’ve been about 20 hours and consistently doing 18-20 hours a week, which has got me back to a decent level of fitness. I know I need to push that on slightly. It is different, I breastfed Max until he was 5 months old and we had to be pretty mindful of that because you can’t do as much if you aren’t getting the quality sleep and recovery in.

14.30 if I am looking to race for the rest of the season and I can keep at a consistent 20 hours a week, that would be great.

15.00 The athlete/coach relationship has always worked well for us. Marc (Marc Jenkins, her husband) will set the programme which is always less than I want to do! But that works well, because if I was left to my own devices, I would do too much! Things changed after London, because we were so invested in it, and so we brought Ben Bright in to help. He was head coach of British Triathlon at the time. But I trust Marc and  I have the motivation. The biggest thing that has changed is that we don’t train as much together any more. We just don’t have the time and if we do, it’s a bit of a novelty. I’ve always mainly run on my own, but at home I swim with the club. Cycling’s probably the biggest difference as I do a lot indoors and on Zwift.

19.00 Cycling’s never been my favourite discipline. I love doing hard sessions, but the long easy miles when its cold and wet, I’d rather be at home! You don’t get many people saying that. But I have really bad circulation!

20.20 what appealed about stepping up to 70.3? It’s more relaxed than the ITU and the Olympics/commonwealth cycle can become very pressured and I think I needed some time away from that and if I need to pull out of a race, it doesn’t really matter.  The change is good, I was excited about something different.

22.15 British Triathlon have been brilliant to me and funded me throughout pregnancy and my injury. But it wasn’t just about the funding, it was more about the change. I would love to combine both Olympic distance and 70.3

23.00 How has the ITU changed? It goes through cycles. When I first started, it was all about the swim. If you couldn’t make that front pack, you were out. Then we went through a phase of the faster runner and we are back to that strong swim-bike.. You just have to get it right for that cycle and I have always tried to train equally across all three disciplines, so I could be ready for any scenario, but I’d always prefer it to be a hard swim-bike-run.

24.55 I’ll be excited to watch Tokyo 2020 and see what’s going to happen, more with the conditions. A sensible athlete will win, not someone who will go hard in the first 10km of the bike. I won’t feel sad as I’ve not been involved in this cycle, but I think if I had been involved and missed out then I would be sad.

26.30 On her role as an athlete representative on the British Triathlon board and trying to get a domestic race series set up in the UK, to support junior and development athletes coming through.

30.10 Would Kona appeal? When you watch it every year, I really get into it. But I’m really not sure my body would cope with running that distance, but being from Wales and having Tenby not that far away, I’d be more inclined to get that way. I just have to get through a half first. I don’t know if I could fit in the training at the moment with the kids being young, But one day, maybe. It’s a BIG maybe!’

33. 00 On getting a first taste of triathlon on an Industrial Estate. It was only when I came into it at 15 or 16 that I started to enjoy it. I think I enjoyed swimming and triathlon just didn’t appeal. I remember I counted the lengths wrong on one event, that put me off.

35.20 If you could only relive 3 races, which would they be? The last World Series I won, Gold Coast 2016. That was amazing for me because until I stood on the podium at the end, I never thought I would be there again. It was after a long time away from the top of the podium, so it meant a lot to me. London Olympics are hard to relive because I never achieved what I wanted to achieve and the third one would be my first World Series win, here I also qualified for the Olympics, so London in 2011. My family were there at the finish.

37.15 – How did she get over not achieving what she had hoped to achieve in London:

“I am not the kind of person to focus on the negatives. Expectation comes into it and I was expected to win gold, but I just don’t focus on it. I focus on what I did do, which was getting a 5th when I hadn’t done that running . And then focussing on the positives and then looking forward as well. It did change me. Leading into Rio , the Olympics is massive for an athlete, but I also knew that if I got there and didn’t perform or if I didn’t qualify then it wouldn’t break me mentally. You need to have that perspective and balance and that’s what I learnt after London. You can’t put everything into triathlon, or if you do and if things do go wrong, then you have to deal with the consequences. I had a lot more balance after London and it’s easier with kids, and it’s easier to switch off, but even before kids I was better about having that balance. you have to do things that make you happy that aren’t just triathlon or things that aren’t just swim, bike, run. That is what I learnt after it and I have spent a lot more time working on that over the last few years.