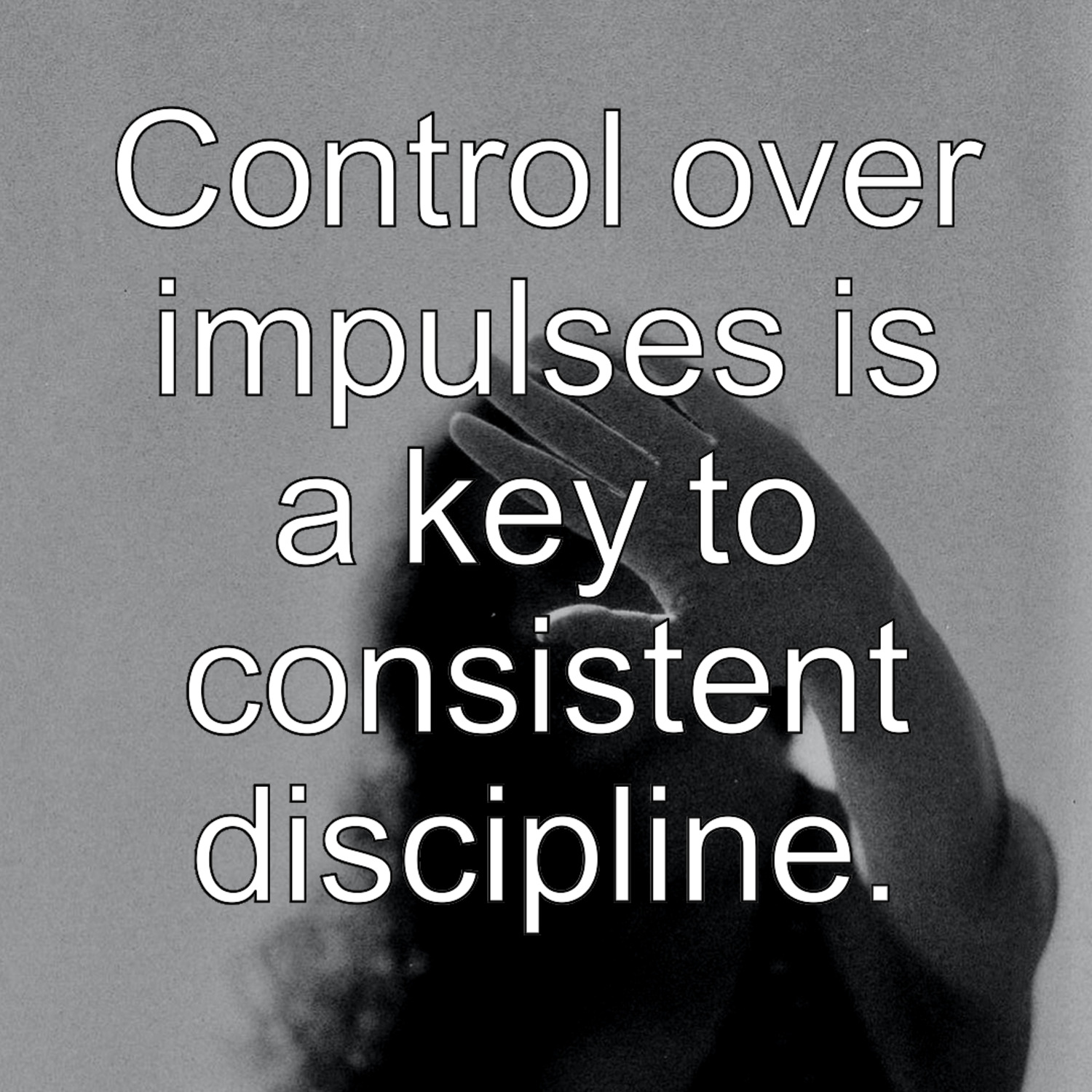 Impulses are the polar opposite of self-discipline, and they are things we must consciously train against indulging in. Oh, but it’s hard. Impulses are behind every subconscious thought that we struggle to rein in. How can we ever hope to combat this? Generally, we must try to interject space and time between a thought and an action. We can do this by simply counting slowly to 10, labeling your thoughts and feelings, writing down the facts of a situation, and asking yourself why five times and making sure to answer honestly.

Practical Self-Discipline: Become a Relentless Goal-Achieving and Temptation-Busting Machine (A Guide for Procrastinators, Slackers, and Couch Potatoes) By Peter Hollins

Get the audiobook on Audible at https://bit.ly/practicalselfdiscipline

One final step toward improving your self-discipline is to learn to control your impulses. They are polar opposites; one is stable and reliable like a metronome, while the other is unpredictable like a volcano.

An impulse is the sudden need to do (or not do) something, an uncontrollable urge. Impulses are often acted upon without forethought or planning and can come out of nowhere to derail your entire day. This is where self-discipline dies, because you are at the mercy of a spur-of-the-moment whim. You can’t engage in both at the same time. Control over impulses is a key to consistent discipline.

For instance, imagine that you are playing piano during a big performance, but you get the sudden impulse to scratch an itch on your face. The itch is not urgent, nor is it important, but it’s something nagging in the back of your mind that will cause you discomfort unless you address it. Now, will you break your performance to scratch the itch, or will you ignore the temporary distraction? You would probably recognize that your impulse should take a back seat to maintaining self-discipline in this instance.

Only rarely, like the above example, is it clear that we should suppress these random impulses. But just like the piano performance, we don’t realize how much indulging in an impulse will throw us off. These things add up, and so does the time required for you to re-focus yourself and get back on the horse of self-discipline.

How can we defeat this type of enemy? First, we must understand it.

Impulses have been the subject of psychological research for many years. Recently, researchers from the European Molecular Biology Laboratory have found strong connections between two parts of the brain related to impulse control: the prefrontal cortex, the part of the brain responsible for complex cognition, personality, decision-making, and social behavior; and the brainstem, the portion of the brain that regulates basic autonomic functions such as heart rate and breathing.

This means that we possess a significant number of connections that allow us to self-regulate and control—it takes a conscious thought in our prefrontal cortex, and it travels to our brainstem for calm and relaxation. When we have a strong link between the two, we can better exercise self-discipline.

How does this translate to humans? This research sheds light on what is happening in your brain when you’re trying to control an impulse. If we’re in an emotional state, the connection between the prefrontal cortex and the brainstem is weakened. We become more impulsive and less self-aware.

We can’t very well take drugs to strengthen our neural connections and maintain self-discipline better, but we can try to ensure that our prefrontal cortex is engaged as much as possible. That roughly translates to making decisions based on analysis and rationality versus emotion. Self-discipline won’t win in the face of urgency, anxiety, and fear, so you have to let them pass and then keep on keeping on. When we’re thinking with our brainstem, which isn’t always something we can control, our self-discipline goes out the window.

There are techniques we can implement to help support our desire to better control our impulses. Generally, they involve some sort of delay between feeling the impulse and the reaction you give to it. In other words, the more distance between feeling the itch and scratching the itch, the better. You’ll usually find that the impulse simply disappears on its own, which further proves its status as something that is simply masquerading as important (when it’s really not).