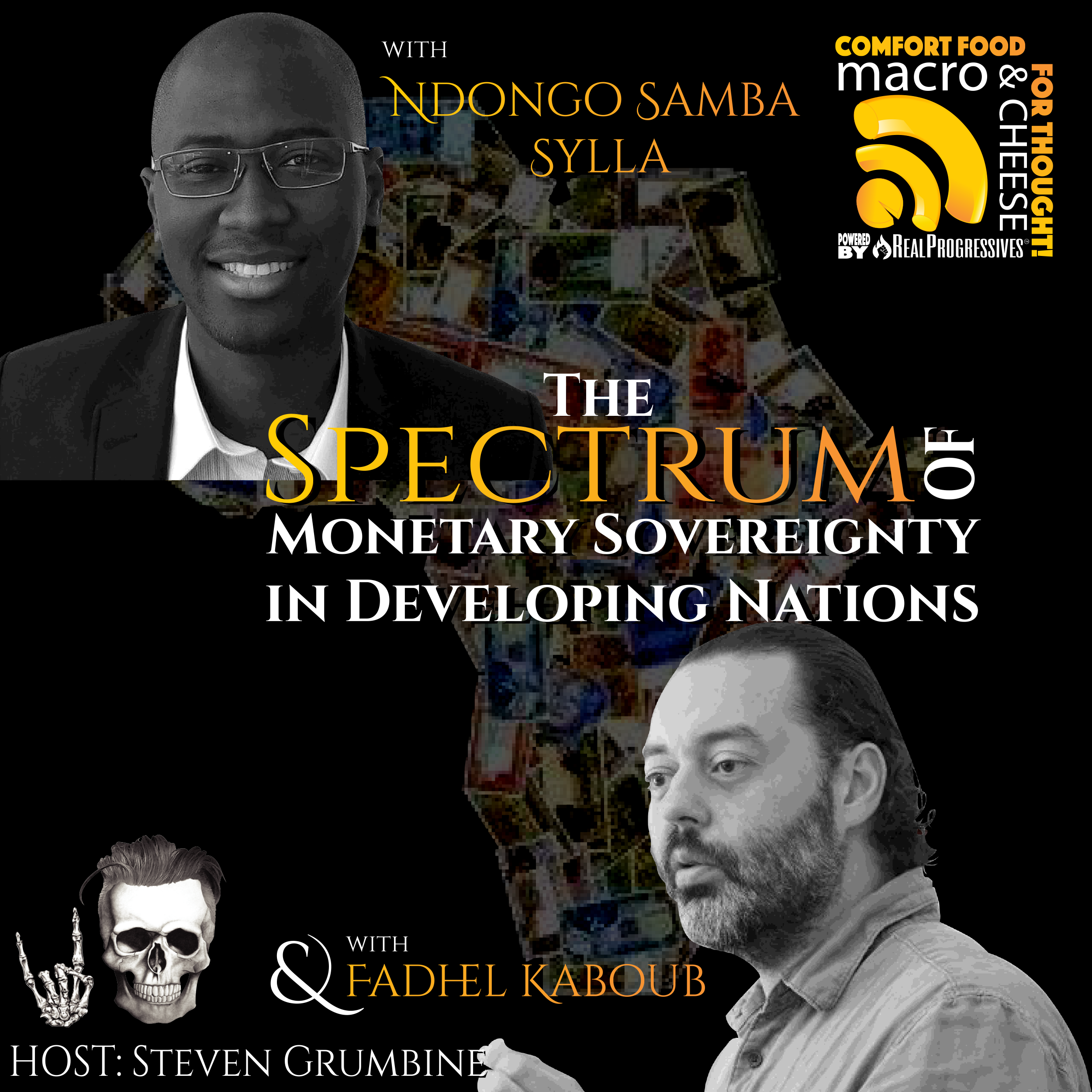 Modern Monetary Theory is often accused of only being relevant to the US. While this is a ridiculous claim, some of us might be a bit guilty of lacking in-depth knowledge about Africa and developing nations. That ends today. We’re excited to introduce our listeners to Ndongo Samba Sylla, whom we met at the 3rd International MMT Conference where he delivered the keynote on “Money, Imperialism, and Development.” Fadhel, an old friend of this podcast, needs no introduction.

Ndongo is an expert on the CFA Franc, a currency imposed on the former French colonies in Africa, who cannot achieve monetary sovereignty until they rid themselves of it.

To provide context, he and Fadhel talk about the meaning of monetary sovereignty from an MMT perspective. It is important not to confuse it with political sovereignty. Political independence is limited without it. For full monetary sovereignty, a country must issue its own currency, tax the population in its own currency, be able to issue debt in the national currency (in other words, they don’t have to borrow and repay in another currency), and they don’t fix their exchange rate to gold, or dollars, or any other nation’s money.

Not all countries are equal. There are those with full monetary sovereignty, like the US, Japan, or China, and there are countries that have given up their national currency. Some, like the 14 nations that use the CFA Franc, did so involuntarily. Others gave it up willingly. Most developing nations fall somewhere in this spectrum.

Developing nations have structural weaknesses, like the inability to produce enough food or energy to meet the population’s needs. They tend to import, in addition to food and energy, capital goods, and export low value-added content, like manufactured consumer goods. Thus, they have trade deficits, placing downward pressure on the exchange rate of their currency. If their money is devalued, everything they import will be more expensive. In a very real sense, they’re importing inflation.

When prices go up on essentials such as food, energy, and medical resources, it leads to social and political unrest.

When discussing the economic problems of developing nations, we must look at the role of international institutions like the IMF and the World Bank, set up between World War I and World War II, to manage global financial activities. Remember that in 1945 when they were created, there were no developing nations; they were still colonies. Their economic concerns were not considered. But in the 1950s and 60s, as these countries achieved independence, economic problems began to emerge between the developing and developed nations. In the ensuing half-century, solutions prescribed by the IMF and World Bank have proven to be spectacularly harmful to the developing world.

MMT focuses on the reality of econ activity, unlike the global financial institutions. When a country exports, these resources don’t go to the citizens. When looking at trade surpluses and deficits, the IMF and World Bank do not consider quality but limit their attention to monetary value.

MMT allows us to consider root causes and craft solutions that address them. To that end, Ndongo and Fadhel announce an upcoming conference in Tunisia, November 6-9. “The Quest for Economic & Monetary Sovereignty in 21 Century Africa: Lessons to be Learned and the Way Forward” (see link below) will assemble economists, historians, Marxists, political scientists, to build on the advances of MMT in developing a plan to benefit Africa and the developing world.

Dr. Ndongo Samba Sylla, a Senegalese development economist, is a Senior Research and Programme manager at the West Africa office of the Rosa Luxemburg Foundation in Dakar

Dr. Fadhel Kaboub is an Associate Professor of economics at Denison and President of the Global Institute for Sustainable Prosperity