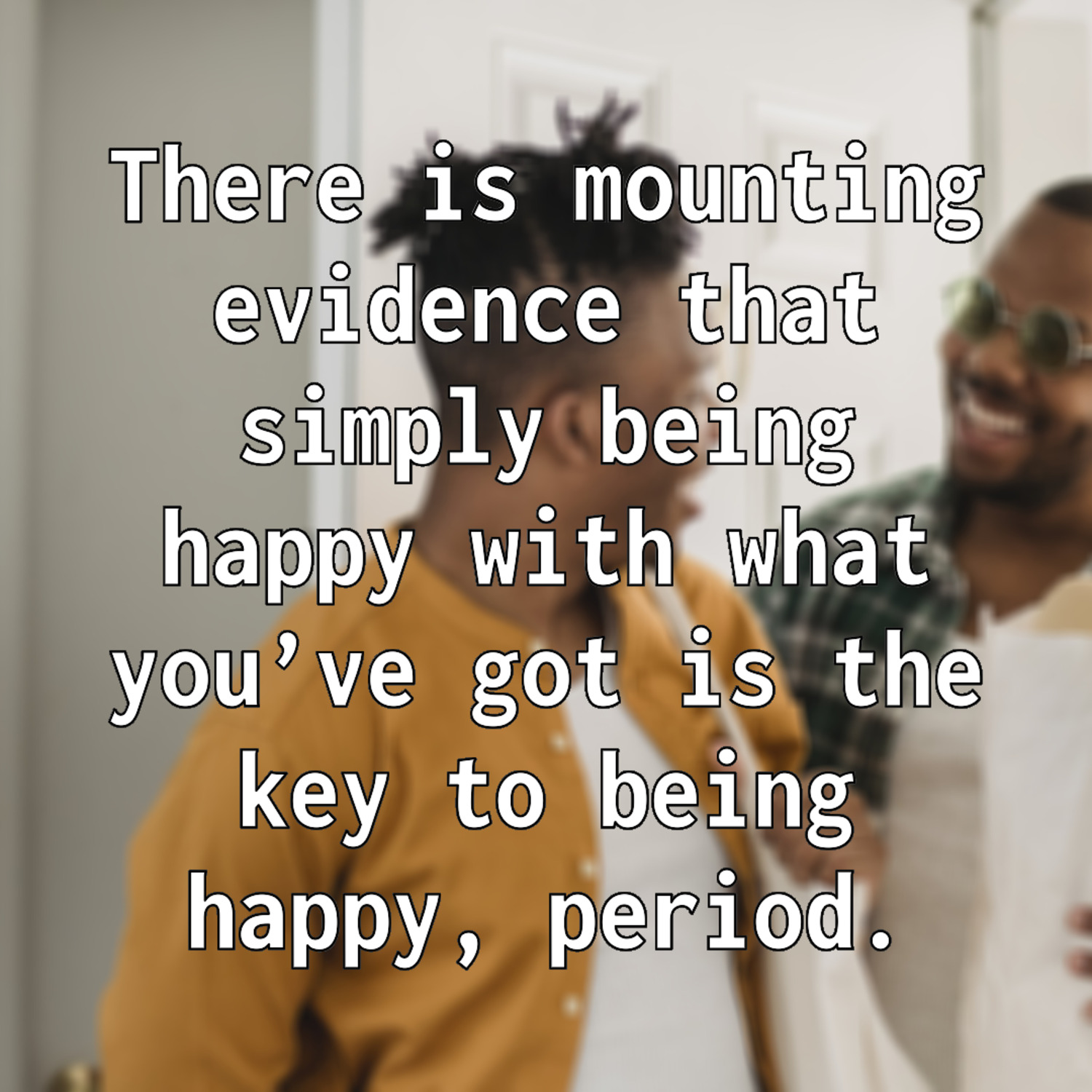 Gratitude is strongly associated with feelings of wellbeing. Say thank you, or simply dwell on all the things you have to be thankful for. Try meditation, but remember to approach it without grasping at goals or desired outcomes.

Learn more or get a free mini-book

Gratitude and thankfulness are having a moment right now, and for good reason – there is mounting evidence that simply being happy with what you’ve got is the key to being happy, period. This idea is not new, however, and it comes with predictable and measurable changes in the brain.

After 3 months, Kini put all the subjects through an MRI scan while they did a separate gratitude task, called the “Pay it Forward” task. The subjects were told that a generous sponsor had given them some money, before being asked if they wanted to donate a portion of this money in turn as a way of saying thank you. It was explained that they should donate money in proportion to how grateful they felt for the money they had received. So, if they felt extremely grateful for the gift, they were told to donate generously. The researchers did this so they could assign exact numbers to the measurement of gratitude, which is understandably a little hard to quantify.

The results were interesting. Kini discovered that there were significant differences in brain activity in the participants who agreed to donate some of their money versus those who decided not to do so. But there was more: “Subjects who participated in gratitude letter writing showed both behavioral increases in gratitude and significantly greater neural modulation in the medial prefrontal cortex three months later.” Basically, they found that, when people had previously strengthened feelings of gratitude by writing gratitude letters, they tended to experience the effects of the Pay it Forward exercise weeks and even months after.

We can conclude two things from this research:

1. gratitude literally shapes our brain, and

2. the more we practice gratitude, the more grateful we become.

And though it wasn’t the focus of this research, we can also see that the more grateful we feel, the more generous we tend to want to be. This makes sense – if you feel blessed and like you have more than you need, you are more likely to feel that you’re in the position to share. Though many other studies have shown that gratitude can make you healthier, more resilient, and happier, and it can even help you have better willpower, Kini et. al. showed that gratitude actually leads to concrete, physical changes in the brain.

Injecting a little gratitude, like novelty, doesn’t have to be a major project to be effective. Occasionally write a letter to someone who has done something to benefit your life, or keep a gratitude journal noting everything you’re fortunate to have. Why not wake up every morning and simply say “thank you” that you’re alive today?

Meditation can make you happy

Many of us already know that meditating is the gold standard when it comes to self-regulation, discipline, and stress relief, to name a few benefits. But one of the most underappreciated effects of a regular meditation practice is simple: you just feel good. Researchers led by Richard Davidson at the University of Wisconsin-Madison have taken a closer look at how meditation can specifically affect our sense of compassion and empathy for others. Increased compassion, they reasoned, directly enhances our own wellbeing and happiness.

Davidson and his research team wanted to investigate whether meditators are happier in life. Compassion for all beings sounds nice, but does it have any physiological correlates in the brain? The team gathered Buddhist monks who were meditation veterans, as well as non-meditators, and looked at their brain function using fMRIs. These scans allow scientists to see the brain’s function in real time, as well as follow the person’s reaction to various stimuli as it unfolds in the brain. The researchers subjected the participants to all kinds of stimuli, including extremely distracting and distressing ones, like the sounds of screams and jackhammers.

It appeared that meditators had greatly moderated responses to stimuli compared to control subjects. This has some intriguing implications for practitioners who claim that meditation allows them literally to influence and change their bodies.

The Enigula and the temporoparietal junction are other areas in the brain that showed greater activity in the meditators – these regions are associated with emotions, empathy, and the ability to perspective shift. It appeared that brain activity associated with joy and serenity were more pronounced in those that meditated.

After eight hours of meditation, the researchers even discovered elevated levels of gene-regulating machinery and lower expression of pro-inflammatory genes. Practically speaking, this implies faster recovery and better stress resilience.

The researchers concluded that the practice of meditation enabled “epigenetic alterations of the genome.” Jill Sakai claimed in the journal Psychoneuroendocrinology that “gene expression changes with meditation.” In other words, though meditation cannot change your genes, it can influence the way that those genes are expressed.

Importantly, the kind of meditation under study was one focused on compassion and emerged from the Buddhist conception of loving-kindness for all beings. But it is also possible to meditate with “pure compassion” that is not directed to anyone in particular, and this has also been associated with greater wellbeing and improved health.

Researchers at the University of California San Francisco Medical Centre found that the areas of the brain associated with happiness were more active in meditators, and the areas associated with fear, i.e. parts of the amygdala, appeared to be better modulated. So, overall, the evidence strongly suggests that meditating Buddhists really are happier than others, not to mention less disturbed by negative stimuli.

How can we meditate to improve our happiness? Meditation master Dzongsar Khyentse Rinpoche warns against the kind of trendy Western meditation that is really mindfulness “with a focus”, i.e. pushing some experiences and thoughts out of awareness in order to focus on one chosen thought or object. Instead of this busy, grasping form of meditation, he suggests not doing anything in particular with your body, breath, or mind. Don’t “focus” on anything. Sit erect but relaxed, cross-legged, but without strain. Keep your eyes open and your gaze soft and possibly lowered, not forcing it on anything.

Next, your breathing: each time your breath goes out, “go out with it.” Whatever you’re feeling in that moment, as your breath leaves you, let your mind dissolve with it. Don’t count breaths or follow the inhale or force yourself to do any kind of special “spiritual” breathing. Just be natural and let go of any struggle. See if you can identify completely with this breath rather than imagining it is separate from you. After the breath out dissolves, there is a gap, and you are surrounded by space. Just hang there and linger for a moment. The inhale will happen by itself.

When you’ve done this for a while, try to pair the body and the breath. Practitioners are advised to have a “strong back; soft front.” Good posture represents your innate dignity and strength, and dissolving with the breath represents vulnerability, softness, and compassion.

Your mind will get in the way, but remember that you are not trying to stop thought – it’s a battle you’ll always lose! Thoughts are not the problem but rather our attachment to them. Instead of getting fixated on our own thought traffic, we can just be aware and see thoughts as thoughts. We just notice when our minds have wandered but without irritation (which is just one more thought).

Simply sit. Body, breath, and mind. Be this way for a few minutes then get up to stretch your legs.