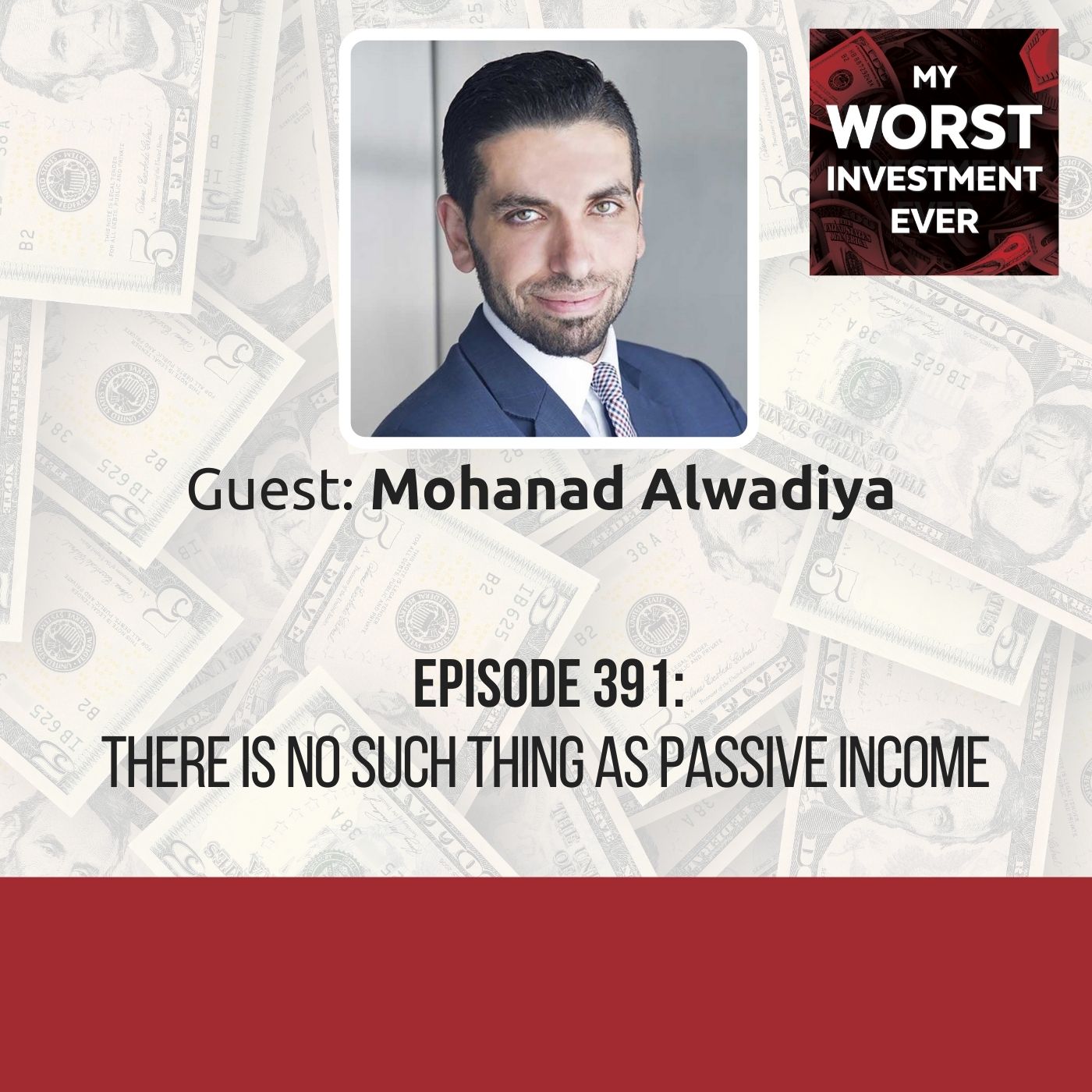 Mohanad Alwadiya – There Is No Such Thing as Passive Income

BIO: Dubbed ‘the wolf of real estate,’ Mohanad Alwadiya is the most celebrated real estate, and business multi-media thought leader in the middle east. He is the CEO of award-winning Harbor Real Estate managing mixed-use institutional portfolios worth over $4 billion.

STORY: Mohanad wanted to secure the future of his soon-to-be-born daughter, so he went for advice from his banker. The banker convinced him to sign up for a long-term insurance plan. A few years later, Mohanad realized that he was losing money from the plan instead of gaining. Any effort to resolve the issue failed, and he ended up stuck with a program where he was losing money.

LEARNING: Do not trust your banker; seek independent financial advice. Don’t make emotion-driven decisions, and continuously monitor your investments. Separate the creation of wealth and the growth of wealth.

“Investing in knowledge is the only thing that you will never lose.”

Dubbed ‘the wolf of real estate,’ Mohanad Alwadiya is the most celebrated real estate, and business multi-media thought leader in the middle east. He is the CEO of award-winning Harbor Real Estate managing mixed-use institutional portfolios worth over $4 billion. Mohanad has his own top-rated property reality–TV show & he’s the author of the best-seller “Landlording–from renting to financial freedom.”

A senior instructor and advisor at Dubai Land Department since 2009, certifying and mentoring thousands of real estate professionals across the region. Mohanad was listed amongst the top 100 most influential personalities in the UAE in 2018. During the 2019 distinctive international Arab festivals awards (DIAFA), he was also awarded as the best social media influencer of the year.

Almost two decades ago, Mohanad was graduating from university and was excited about life. His goal back then was to become financially independent. He wanted to break free from his family financially.

Making a plan to be financially independent

So the plan for Mohanad back then was to identify the number that would allow him to be free. He came up with $2,000. He thought if he gets this every month, he would be financially independent and not depend on his family.

The best way to make this happen was to get a job. So he applied for jobs and finally, he got a very good one. Mohanad worked extremely hard with commitment and consistency, and he was able to achieve that number. He got the salary of his dreams.

Mohanad was super happy and excited about hitting his number, but after a while, he realized that this number was not enough anymore. He had developed higher expectations and was more ambitious. His expenses had also grown.

Mohanad decided to increase his number by another $1,000. So he worked long hours, made more clients happy, and after a while, he got it. But again, he wasn’t satisfied with this new number. This time, Mohanad decided to increase the number substantially, so he doesn’t have to do this every year or two. He raised his number from $3,000 to $10,000.

As Mohanad was working hard towards achieving this new number and his ultimate goal for financial independence, something changed his life forever. Mohanad found out that he was going to be a father.

Mohanad had a lot of mixed feelings. He was so happy, but he also panicked because all along, he was working on a plan for himself. He never thought of having another person that he needs to work for. So he freaked out.

Mohanad now started concentrating on coming up with a plan to secure his soon-to-be-born baby girl. He decided to go and consult the person who knows about money the most—his banker.

Mohanad rushed to his bank and broke the news to his banker. The banker pulled out a fancy folder, opened it up, and showed Mohanad this golden long-term investment plan. He later found out that this was a product that the bank was selling on behalf of an insurance company. Without any hesitation, Mohanad decided to allocate a sizable portion of his new number towards this investment for his daughter.

He signed that agreement, a commitment that he will be investing every month with this company with the promise that they’re going to give him a considerable amount of money when his daughter turns 18. This money would help her get a good degree. Then, she’ll get her own job and start working on her number like Mohanad decided to do with himself.

Forgetting about the investment

Mohanad went back to his everyday life. His daughter was born. He kept working hard, and every month the insurance company would take a big chunk of his salary.

After a couple of years, Mohanad checked his email when he came across the quarterly report he would receive from the insurance company. Usually, he wouldn’t check them because he believed his banker kept tabs on the investment for him. This particular time he decided to click and see what was happening. He was shocked to realize that he had lost almost 48% of the principal.

The banker bails out on him

Mohanad called the banker who bailed on him immediately and asked him to call the insurance company directly. He called the company and learned that there was no mistake; he had indeed lost that much. He was confused because the investment was supposed to be gaining, not losing. They kept debating so much over the phone that Mohanad decided to have a meeting with them.

He met the head of investment at the time, and he was extremely cold. He asked Mohanad to go through the contract that he signed. The contract stated that there was a big chance he could lose money. And if he wasn’t happy with the company’s performance, he could change his investment allocation.

Stuck with a bad investment

Mohanad weighed his options and realized that he was stuck with this investment. If he stopped the plan, he would lose everything. He decided to reduce the amount he invested with them without any penalty until such a point, about five years when he could get out with a loss.

This investment mistake left Mohanad angry and devastated. He decided to change everything, where finances were concerned. He didn’t want to have a number anymore. What he needed was to have a better objective in his life. Mohanad realized that he needed not just to have a number in terms of monetary value but also a number in terms of sources of income. He decided that he didn’t want to be an employee anymore. Or even if he stayed employed, he must have multiple sources of income.

Mohanad started reading books about investment to educate himself on how to invest. He never wants to make such an investment mistake ever again.

Don’t make investment decisions when you are feeling emotional. You need to be rational when choosing what to invest in.

You should never trust your banker ever. They are good at keeping your accounts but not good when it comes to offering you professional investment advice. Instead, seek professional advice from independent consultants or people who have been through the investment journey and have a genuine interest to help, not just trying to sell you something.

Make sure that you monitor your investments regularly so that you are aware of everything going on. If something is wrong with your investment, you will know about it early and find the necessary solution.

When someone comes to you with an investment proposal, don’t accept it on the spot. Take it home, look at it, read it, and then ask advice from people who know about such investments.

Start investing now and take advantage of the power of compounding

if you start investing now and you invest over time, your money will grow exponentially over time because it’s compounding. However, if you were to take your money out of your investment for your monthly living, you don’t get the compounding interest. Correct compounding assumes all of the income and all of the gain that you receive is being reinvested in that investment.

Separate creation of wealth and the growth of wealth

Creating and growing wealth are two different things that should be kept separate. Creating wealth is what we do to generate income streams. Growing wealth is taking that income and investing it in a place like the stock market so you can earn more from it.

Not everybody can generate 55 different types of income streams. There’s nothing wrong with having a good job that’s earning you good money. If you keep your monthly spending below your income, you will create wealth each month through your salary.

Keep reading. The more you read, the easier it will be for you to read more books. Your knowledge, your ability to comprehend specific terminologies or industries will become faster and easier for you.

Mohanad’s number one goal for the next 12 months is to start a crowd investment platform in Dubai. The platform will specialize in making real estate a mass opportunity for people to invest in. The goal is to make it easier for people to review specific assets and invest in them, as little as $1,000. This way, they can own a stake in a property that is already generating income to have an added source of income.

“Just keep investing in yourselves. Try to start building other sources of income even if they are just small ones.”