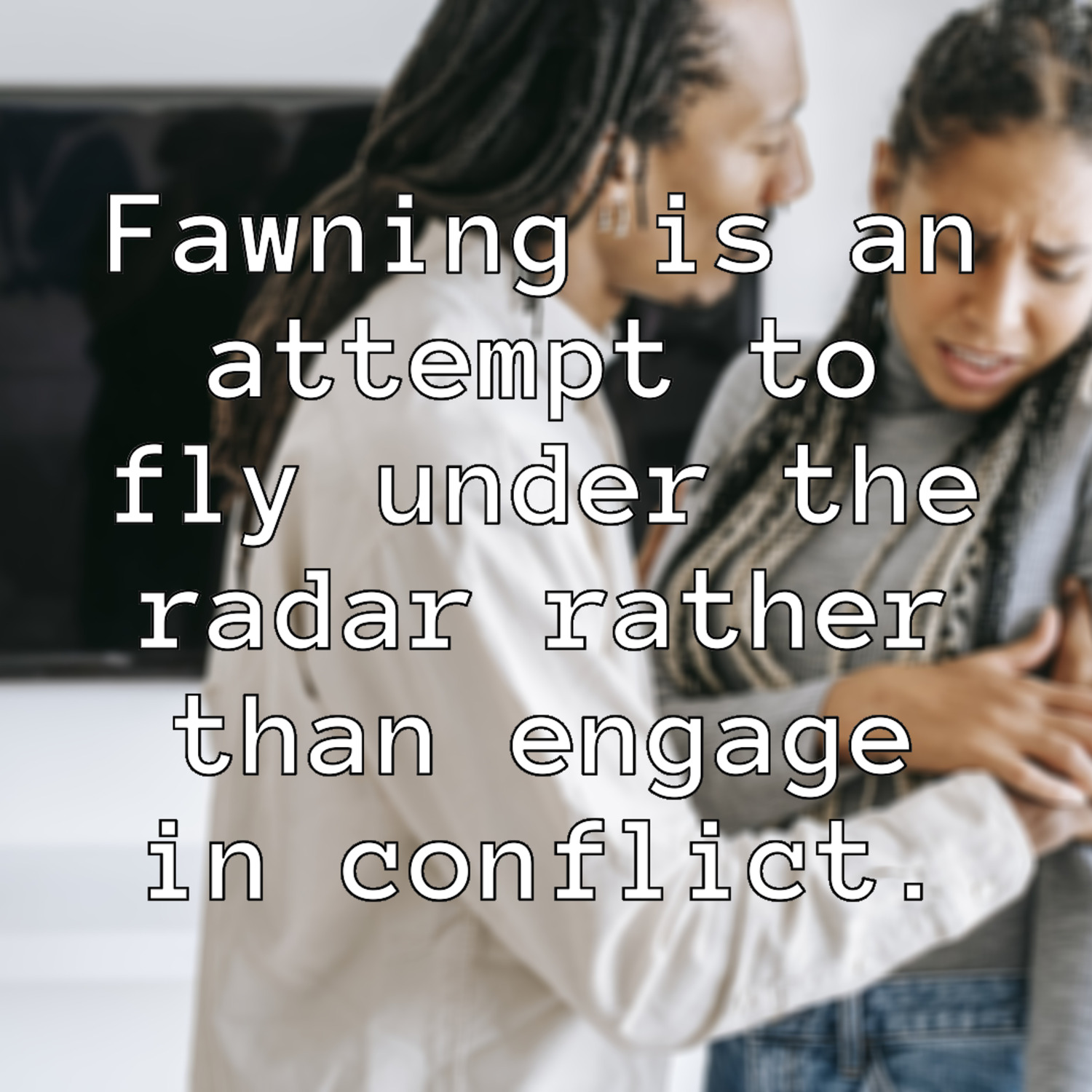 In the face of trauma and conflict, some people respond with anger, some respond by fleeing . . . and some, like Person A, respond with a flood of appeasing, soothing, and conciliatory behavior. “Fight or flight” is an option for some people, but for those with a history of trauma, another option when faced with threat is to go into fawning mode and try to make it all better.

Picture an animal defensively rolling onto its back, trying to appear as meek and agreeable as possible so that it’s spared by a powerful predator. Fawning is an attempt to fly under the radar rather than engage in conflict. It’s a way of deflecting attention.

In a crisis or disagreement, is your first instinct to soothe, calm, or please others?

Do you do anything to avoid conflict—even if that means ignoring your own needs?

In a stressful interaction, is your focus on other people’s emotions?

Fawning behavior is actually a kind of trauma response. This behavior, in other words, is something you might have learned in childhood, where “rolling over” this way was the only thing that helped you survive conflict.

Picture a couple having an argument. Voices are raised and things are getting heated. Then, all of a sudden, Person A starts smiling sweetly. “Look, let’s just forget this whole thing, okay? It’s all so silly; it doesn’t matter. You’re right about everything. Can I make you some cocoa? With marshmallows? What else would you like?” Person B is confused, wondering where all the hugs and kisses are coming from and what happened to the argument they were having only seconds ago.

Person B has witnessed what is called the “fawning response.” In the face of trauma and conflict, some people respond with anger, some respond by fleeing . . . and some, like Person A, respond with a flood of appeasing, soothing, and conciliatory behavior. “Fight or flight” is an option for some people, but for those with a history of trauma, another option when faced with threat is to go into fawning mode and try to make it all better.

Picture an animal defensively rolling onto its back, trying to appear as meek and agreeable as possible so that it’s spared by a powerful predator. Fawning is an attempt to fly under the radar rather than engage in conflict. It’s a way of deflecting attention.

In a crisis or disagreement, is your first instinct to soothe, calm, or please others?

Do you do anything to avoid conflict—even if that means ignoring your own needs?

In a stressful interaction, is your focus on other people’s emotions?

Fawning behavior is actually a kind of trauma response. This behavior, in other words, is something you might have learned in childhood, where “rolling over” this way was the only thing that helped you survive conflict. Some people may also find that their fawning behavior accompanies the tendency to freeze during conflict. Maybe your mind goes blank, your heart races, and you dissociate. You are the proverbial “deer in headlights.”

At the core of this fawning and freezing behavior is the unconscious core belief: “the price for peace with others is compliance. If I make other people happy, then I will be safe.” The mindset is one where safety is all that matters, and your goal is to do whatever it takes to achieve that safety.

Michael had an abusive father growing up. His father would get angry, yell, and break things around the home, going on rampages that would terrify the family. Early on, as a young and defenseless child, Michael learned that the best strategy was to do whatever it took to appease his father’s anger.

This meant agreeing with everything he said, quickly complying with any requests, and generally making himself as small and non-threatening as possible. After all, if he made one wrong move, his father would interpret it as a threat, and then more abuse would follow. Michael became so good at this strategy that he even learned to pre-empt his father’s moods, walking on eggshells and finding ways to manage his strong emotions on his father’s behalf.

Here is the sad thing: this approach genuinely did work for Michael. It did prevent conflict and keep him safe. But in adulthood, Michael realized what this safety cost him. Those who use fawning behavior are often confused about their own boundaries, unable to meet their own needs, and, ironically, vulnerable to more abuse.

Not all people-pleasers are doing so as a part of a fawning response, but if this is the case for you, know that there are ways to heal and rewrite the narrative for yourself. Your task will be to change the core belief that compliance = safety. Those with abusive backgrounds may also strike another unconscious bargain: “If I attach myself to this powerful person and make them need and like me, then I can win favor and be safe.” But that powerful person may well be the same person who is creating the lack of safety in the first place! It’s not unlike Stockholm Syndrome, where hostages attempt to control an abusive dynamic by bonding with their captor.

People who default to fawning behavior would sooner absorb any emotional blow than speak up, say no, and face the fallout. Unfortunately, knowing how to erect and assert healthy boundaries is a part of being a mature adult. How do we get out of this bind?

PTSD (post-traumatic stress disorder) is seldom something that people can deal with on their own. A mental health professional, however, can point you in the direction of evidence-based therapies that can help you rewire both your body and mind, and untangle the learned trauma response. Consider EMDR therapy, medication, and talk therapy—or a combination of all three.

Dr. Arielle Schwatz is a C-PTSD (complex PTSD) expert and explains that abusive or dysfunctional parenting can create children who are hyper-focused on their parents’ emotions. To survive an unhealthy home environment, these children felt compelled to take care of their parents’ emotional needs. To do this, they needed to suppress their needs. They also needed to put their authentic selves and their feelings on the back burner. These feelings are still there, however, and may show up in adulthood as the tendency to recreate these same “enmeshed” or codependent relationships (more on codependency in a later chapter). Cut off from their own needs, such people may feel numb, dissociated, and inauthentic.

The insight of “inner child work” and re-parenting yourself is that we are able to give ourselves today what we did not receive as children. In the past, we had to adapt in certain ways to survive less-than-ideal childhoods, but now, as adults, we have a choice. We can rewrite the core belief of “To be safe, I must comply” to “I am allowed to be who I am. I am a good person. It is safe to have needs and to ask for them to be met.”

Overcoming a difficult childhood takes time, but it can be done:

• Set boundaries. Have limits and defend those limits (more on this in Chapter 6).

• Stop explaining yourself or justifying your choices. You don’t owe that to people.

• Allow someone else to do the work for a change. Delegate or ask for help instead of doing it all yourself.

• Promise not to abandon your inner child. Decide that your priority will be to protect and defend them, rather than to serve the interests of bullies or those who trample on your boundaries.

• Be your own mother (give yourself unconditional compassion and love) and your own father (protect yourself with solid boundaries—and defend them!).

Reconnect with Your Principles and Values

Fawners have substituted their own judgment with the needs and demands of others. But you strengthen and orient yourself when you remind yourself of what’s important to you, and why. It may take time to clarify your authentic self, find out what you truly want in life, not to mention find the courage to express it. But you may also find that speaking up is itself something that gives you courage. For fawners, it can be scary to be “seen.” But in small ways, you can challenge yourself to speak up and express your genuine opinion, even if it goes against other peoples’ opinions or causes a little friction.

People who have learned to fawn over others are unaware of their secret superpower: that they have the ability to create safety for themselves. That they can be safe in their own convictions. They do not have to strike a deal with anyone to feel safe, but can feel safe right now.

Become an Expert on Your Own Feelings

Fawners are experts at other people’s feelings. They may be so tuned into other peoples’ needs that they seem psychic at times. However, what they’re not good at is knowing how they feel.

If you’re a people-pleasing fawner, you may have learned early in life to turn your emotions off. What good would that do, anyway, since there’s no chance of them being heard or respected, right? But by dissociating, you sever your mind-body connection and lose touch with who you are on a very deep level. You may even find yourself feeling lost and vague—who are you amidst all these other people and their desires and demands?

There are plenty of ways to reconnect with your genuine feelings and to slowly teach yourself that it is safe to feel:

• Try body-mind strengthening activities like dance or yoga. Drop any expectations or “shoulds” about how to move your body, and listen to how it wants to move.

• “Befriend” the emotions that emerge in you, whatever they are. Literally picture your feelings as people sitting around a table. Welcome them all and ask them what they have to say. Your feelings were not heard as a child, but you can listen to them now as an adult.

• Prick your ears and watch out for feelings of guilt—the signature emotion of the fawn response. Try the “separation of tasks” exercise above and consciously choose to let go of things that are not your responsibility and not under your control.

One amazing way to gently shift the tendency to fawn over others is to encourage the opposite mindset, i.e., one that is playful, carefree, and creative. As a child, you were meant to be loved and kept safe so that you could enjoy yourself, grow, and explore the world. That sense of play and exploration was cut short with a premature feeling of responsibility for others. You may have developed the opinion that having fun was too risky, and that it may actually be dangerous to relax your vigilance for even a second. It’s all very serious!

But right now, you can reconnect with that sense of innocence that you may have missed out on. Take your inner child out on a “playdate” and ask them what they really want to do. No, it doesn’t have to make sense, and no, nobody else’s opinion matters.

Maybe you buy yourself some silly craft supplies or go for a walk without any idea of where you’ll go. Maybe you just enjoy having a free afternoon without any plan at all and zero idea of what you’re “supposed to do.” If it’s fun and it makes you happy, why not?