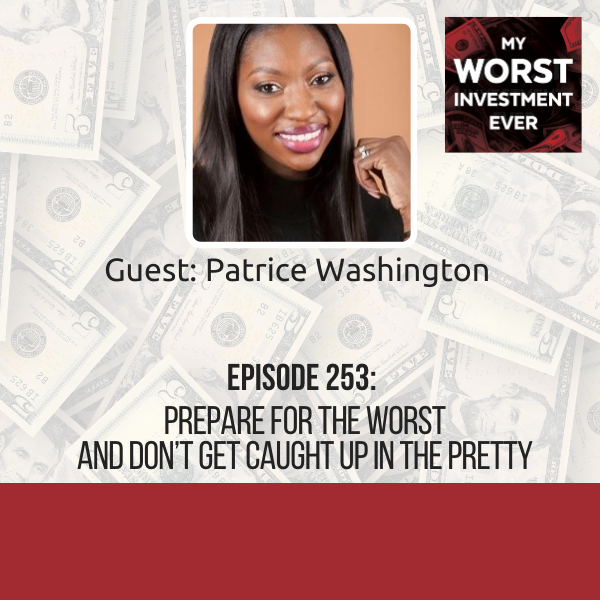 Patrice started as your favorite personal finance expert, “America’s Money Maven,” but has since expanded her brand and mission to encourage women to chase purpose, not money. She uses her Certification in Financial Psychology to help the masses get beyond budgets and credit reports and dive into the heart of why we behave the way we do with money.

She encourages women to have “wealth” in all aspects of their lives by pursuing their purpose, being fulfilled, and earning more without ever chasing money. Through her teachings, Patrice empowers women to look at life through the lens of abundance and opportunity, instead of lack and scarcity.

As host of The Redefining Wealth Podcast, Patrice has built a thriving international community of high-achieving women committed to creating a powerful life vision--in their careers, home, health, and personal finances. Featured on Forbes.com as one of “15 Inspiring Podcasts for Professionals of Every Stripe” and highlighted by Entrepreneur.com. The Redefining Wealth Podcast boasts over 2 million downloads and counting!

“Don’t get caught up in the pretty, in what looks good and what looks like money. Focus on the nitty-gritty of the numbers and what you can sustain even in your worst month.”

Patrice was on top of the world. She and her now-husband and then-boyfriend were driving matching Range Rovers and owned almost 13 pieces of property collectively. They had 16 loan officers and real estate agents on their roster. They had all these things going for them, and they thought they ran the world, and it was a beautiful time.

The one mistake that undid it all

Around 2006 Patrice’s staff insisted on having an office to work from and fancy technology that would help them land more clients. She listened to them, and so they moved from the coworking space they were using to a larger office, almost 2,000 square feet, which they fully furnished. All these new changes took their overhead from about $2,000 to $14,000 a month.

In 2007 the recession started to rear its ugly face. People were talking about the real estate bubble bursting. Other mortgage brokers in Patrice’s building were talking about giving up their office space and work from home. Patrice felt sorry for them, still oblivious of the looming crisis.

In 2008 banks started closing down, and things got terrible at Patrice’s real estate business. At the time, Patrice was in hospital admitted because of a complicated pregnancy. She was so helpless and could only watch from her hospital bed as things went from bad to worse.

There was no money coming in, and Patrice had to use their life savings to keep the company going. They exhausted their savings within a year. Within about 15 months, Patrice and her husband lost everything. They went from a 6,000 square foot home in Southern California to live in a 600 square foot tiny apartment.

Prepare for the worst

As an entrepreneur, you have to be prepared for the worst. Don’t plan your personal and professional life based on your top months, but your worst months. Your business and personal budget should be based on your worst performing months.

There’s more to a business than sales

Sales is just a function within the business, just like finance, accounting, and marketing. So when you decide to run your business, and you’re great at sales, remember that that’s one function within a company, you’ve got to take care of all the other parts. Make sure you have good people around you that are doing those other functions.

Know where you are

Your employees are not always right

It’s imperative to stay in touch with your employees and customers, but you have to remember that they may not necessarily be giving you the best advice about what you should be doing. Listening to your customers and employees is one input in your decision-making process.

Don’t listen to the chatter; make decisions rooted in the numbers and the data. Always look at the bigger picture and think about life beyond today. You never know what’s coming around the corner. You want to be ready.

Patrice’s number one goal for the next 12 months is to rest in the spirit of contentment and be present to everything that’s going on and make decisions rooted in faith, not fear.

“Keep chasing purpose, not money, and redefine wealth for yourself.”