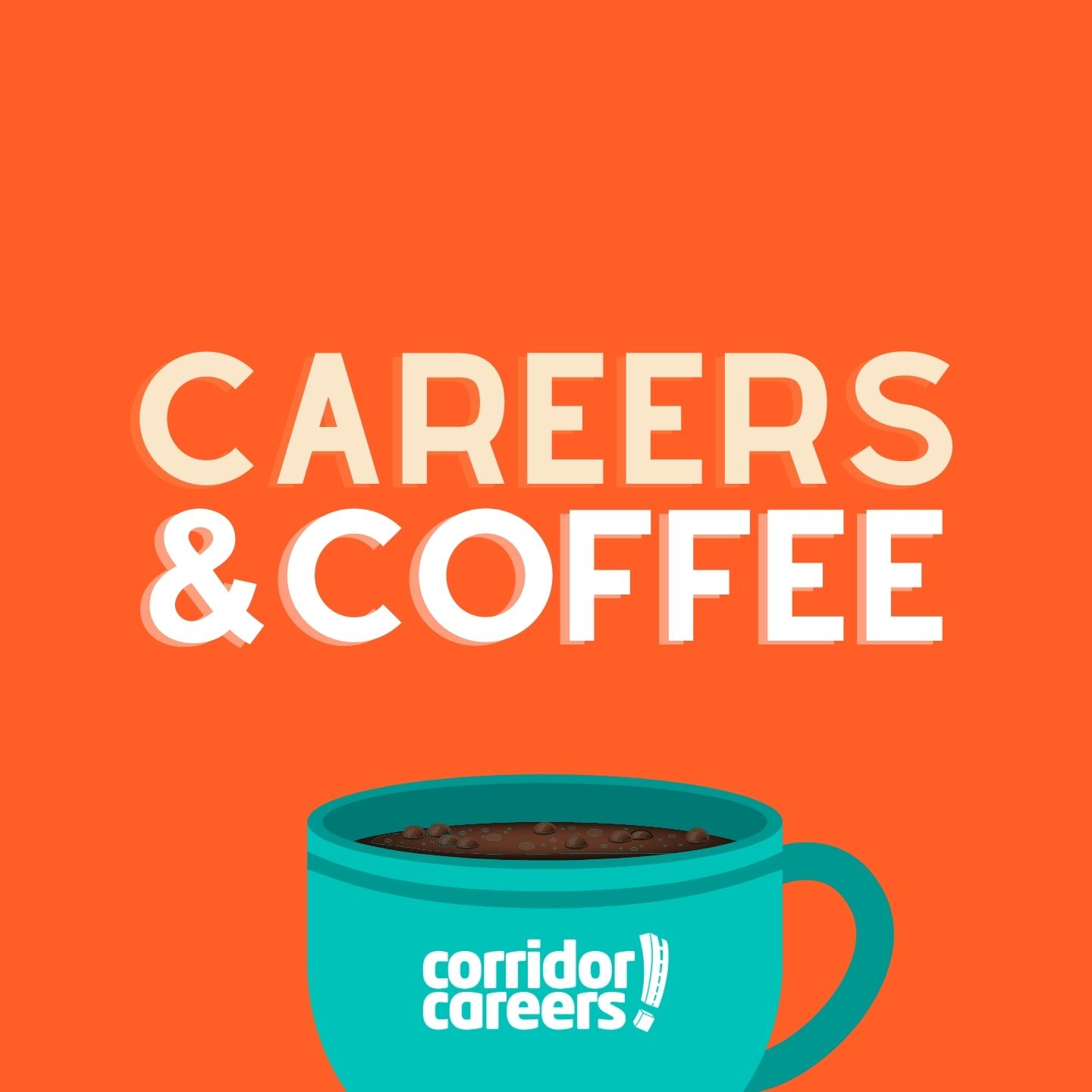 Mentioned on the Pod:

All right. Good morning. How are you doing? Liz?

How you doing Dan good?

I'm good. I got my coffee going. It's getting

ready to snow outside. And it's Friday morning. So I'm doing

Yeah, this is typical Iowa weather it was

like, what, 45 degrees this week, and now it's gonna dump on

Yeah, pretty normal for this time of year

The Raygun weather forecast was correct.

That's a great is that just on a t shirt? They

They have a T shirt. They have like a

printable thing to my friend posted it on Facebook. And I was

dive into our topic for today. We want to talk about

something we have 24 of them on Corridor Careers right now. It's

a popular role. Always a lot of interest in it. But I wanted to

get your thoughts. I guess, number one, what do you think

they get you acclimated to the workforce, you know, like, in a

way that is really, a really nice way to enter the workforce,

good fit for you. So I think the traits that you're going to be

looking for, can sometimes be summarized in what you, you

don't want to be standing all day, then maybe, you know, okay,

well, maybe administrative work might be something right for me.

And so some of the skills that someone in administration might

have, would include just good organizational skills. person,

being personable is always helpful in an office setting,

be, you'll probably be working with customers occasionally. So

being personable and friendly is really helpful. Being

that are still in place, like we have a position on our board

not going to be filing things into a filing cabinet. But

you're going to be sorting through documents, and maybe

images and, and putting them into virtual files. So it's

really the tasks are the same, the just the method of how we do

role. I think an office role is one of the first jobs I ever

had, I was an office assistant for for a doctor. And my job was

to call patients and remind them of their appointments, and then

files. And I'm sure that's probably not something done the

same way anymore. You know, a lot of automation has replaced

that job, but but I'm sure there's few offices that still

use a person to do those things.

Sure, yeah. And I think you bring up a really

good point there with being personable, right. So in your

example, you were calling patients to remind them of their

appointments. I think if you think about administration,

there's a lot of different applications. And it's a really

that you may see yourself growing with, when I think about

that I've worked with that worked in administration, they

know the business so well, after they get acclimated they, they

understand how the business operates. And so they have this

ability to help a variety of different people within the

business, right? And so when you have when you find the company

that you want to work for, and even if you know if you can get

your foot in the door as a administrative assistant or

bookkeeper or clerk, something like that, you can move around

everybody that you work hard because you'll understand that

It almost feels like it should be a requirement

if you're going to get your MBA to actually work in an office.

Because that's really where you really learned exactly what

you're saying how the business works. And so typically, the

board right now. So just can kind of get a handle of like,

what what's out there in our market. So you can see the word

clerk and assistant are kind of repetitive here. And coordinator

is a common term too, although we have seen like recently, the

word coordinator may be kind of trailing as far as keywords, but

office role. Because really coordination is part of like

communicating between teams, making sure that any business

activities are coordinated with the tasks that need to be done

in order to make those activities happen. You can see

clerk, or an Account Clerk, you know, with different governments

are on our board, which is a nice way to get into city

government or administration. Receptionist is a common one as

definitely in hospitality, that's never gonna go away. And

the Community Foundation to, you know, a manufacturer, or, you

know, just administrative roles are necessary in pretty much any

kind of workplace. So, it just depends on what style of working

you like, if you if you want to work in nonprofits, you can

probably find administrative role in there, if you want to

work for profit, you can find something there. And then if you

want to particularly work in the healthcare field, there's going

to be a lot of administrative roles there as well. And that

can be really rewarding to to work in, you know, those fields

and the administrative role because you get that kind of

like bird's eye view. So let's just take a look at one of

these, I want to pick one here, Dan,

for University of Iowa Center for Advancement.

Okay, down, and there we go. Alright, so

University of Iowa job duties are always really spelled out.

And you'll find that with the University of Iowa, as well as

like, you know, Municipal roles typically have pretty detailed

job descriptions. So that's actually kind of helpful for

jobs here, because you kind of can really get a sense of what

this role is going to entail. So I'm just kind of scanning

through here, and I can see that this is, oh, it's a remote

friendly position. And it's full time. So that's kind of cool.

Um, it's, it allows for significant telecommuting. So

per week, depending on the business need after the first 90

days on site. So that's kind of cool, you'll get trained on

site, and then you'll be able to work from home. Um, so it looks

You're gonna be Sherlock Holmes. And these

advancements, I know means fundraising. So you're basically

fundraising officers. So this could be a really interesting

role. Um, yeah, this is available information to answer

themes, and I kind of highlight things that I'm not quite sure

what they mean, I might read through it a couple times. And

then they tell you what the benefits are. So you'd have to

visit this link in order to see their full benefits. But it

seems like they offer some pretty decent benefits. And if I

want to apply, I would just click Apply now, and it would

take me to the recruiting site, which will probably require me

to create an account and login. So that's just one example of an

administrative role. Yeah, we have on our job board, we have

Yeah. And I like that one. It's you're more

serving in that role, more serving, maybe the internal

people that you work with, right, versus maybe taking a lot

of external calls or something like that, or dealing with

customers so much. So you know, your customers kind of your

Yeah, and that's kind of cool, too. Because you

could, you know, when you're doing your job search, it's,

kind of look into the opportunitys so if I don't want

to be primarily working with customers, or like making calls,

you know, then I know that I want to be doing something at an

internal level, but you're still gonna need to use the same

skills, right? Like you're still gonna have to call, you know,

make hotel reservations and you know, do those things. So you

role might fit in with that. And there's probably with there

being so many jobs, I mean, we have over 500 jobs on the job

board here in Corridor Careers today, there's probably going to

be something that meets your needs.

Yeah, you can definitely find something that

you're looking for. Right now, that is for sure. It's a job

market, lots of jobs available. Um, all right. Anything else

for, you know, for people that are creative, like

who are in a creative role, maybe, or maybe like a harder to

find job, like, you could potentially crossover that skill

require a lot of creativity, just in a different way. And

it's usually through creative problem solving. So if you're

really, you know, you need you need a job, and your skill set

may not exactly match up with administrative roles, like you

don't have a lot of job history in administrative roles, if

you're creative, and if you have like, kind of strong problem

solving skills, those are gonna be really important to bring up

in a potential interview a cover letter, or like, whenever you're

talking to somebody about your interest in administrative

roles, say, hey, like, Hey, I don't have a lot of experience

in administration, but I'm, I'm really good at solving problems.

And I'm great with people, you know, like any of those things

beneficial to you, because those are gonna be really strong,

important skills in any of those roles.

brings up something. This could be administrative roles might be

for a while, right? Maybe, yeah, you stayed at home with the kids

for a while. And you were organizing all these different

things, right, like your, you know, soccer practice and meals

and all. All that type of stuff. That translates really nicely to

an administrative type role getting back in the workforce.

Yeah, I mean, if you were handling your household

Like, you've effectively paid your bills, then you were doing

a good job. And that's something that an employer would be

interested in. So yeah, you just kind of to talk through those,

those little gaps. I mean, everybody's gonna have some kind

of gap in either their employment or their experience.

It's very easy to overcome those.

Cool, I love it. All right. Well, I was gonna do

it for us this week. Thanks for tuning in.

Guys have a great week.