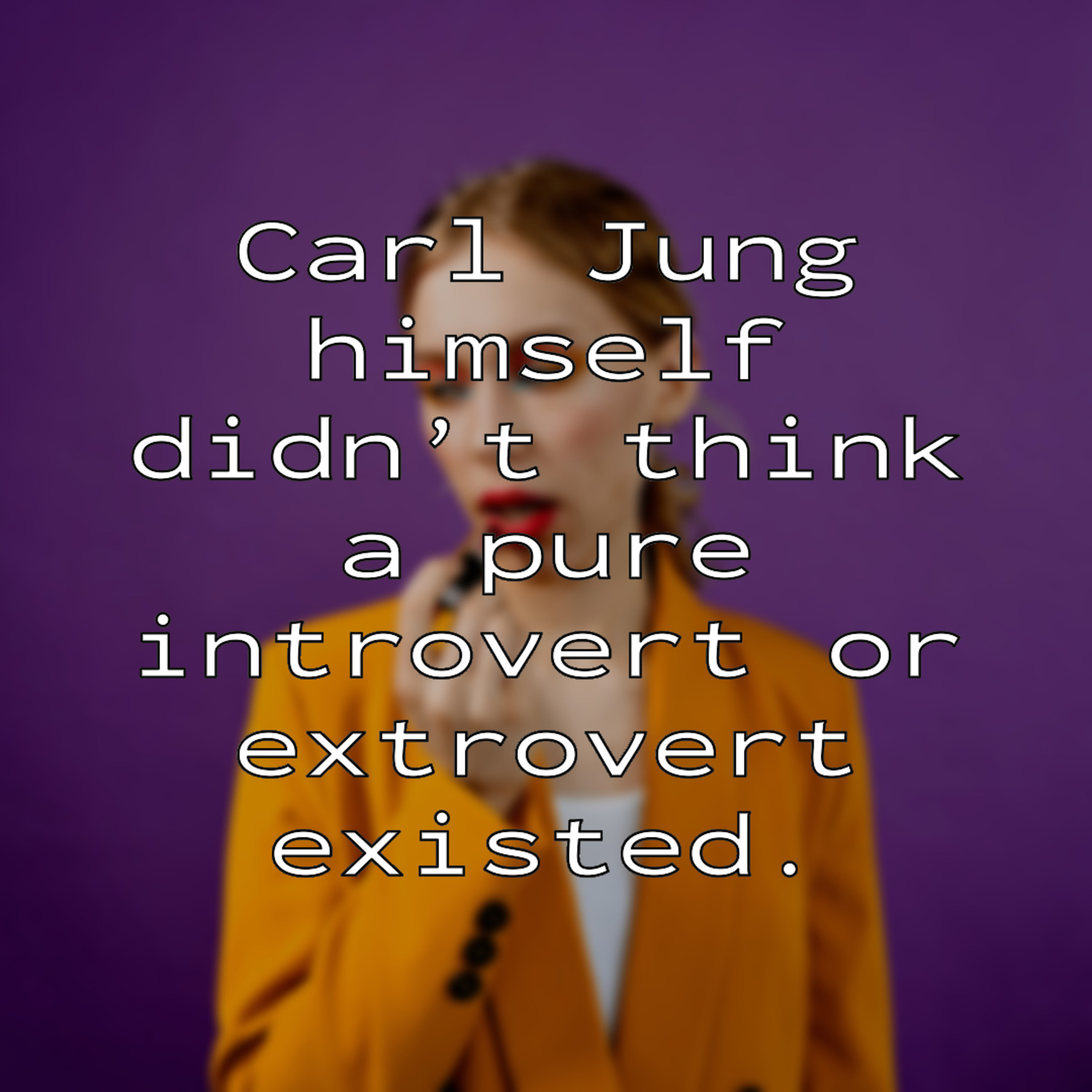 Even though Carl Jung defined these two terms and forever created a spectrum, he recognized that it was impossible for people to not be in the middle. These are called ambiverts, and the vast majority of us are ambiverts.

Get the audiobook on Audible

Hans Eysenck was the first to coin the term ambivert to define a person as one who manifests the characteristics of both an introvert and an extrovert. They are in the proverbial middle, though there is no exact point for middle and it’s impossible to achieve the exact middle between one personality type and the other.

With something as dynamic as temperament and personality traits, the pendulums keep swinging from one side to the other.

Just because we throw a temper tantrum one day doesn’t mean we can’t be calm and collected the next.

As a reminder, to the introvert, the real world is an inner world of ideas, thoughts, and perception generated by their own minds.

An extrovert is one who derives energy from the outside world, other people, and things that exist within that person’s environment.

And yet Carl Jung himself, the man who coined those two personality types, didn’t think a pure introvert or extrovert existed.

He said, “There is no such thing as a pure introvert or extrovert… Such a person would be in the lunatic asylum!” The ambivert is a representation of the vast middle ground between a pure introvert and pure extrovert.

Just like without positive and negative emotions, we can’t realistically function without both sides of the spectrum.

For every yin there is a yang, and so on and so forth.

There are numerous biological factors that differentiate personality types, but the vast majority of people are permeable enough to move from being more or less introverted to being more or less extroverted, depending upon the situation, our motivations, and the people we are surrounded by.

Writer Jonathan Alexander states, “We all have a little bit of introvert and a little bit of extrovert in us, no matter which personality we display the most.” Everyone has these mood swings.

They are natural, provided they are not extreme and unstable.

Sometimes an introvert may be the person never wanting the party to stop and having a seemingly endless supply of social energy.

This would seem to be at odds with the modus operandi of the introvert, until you learn they are trying to impress someone, like a potential romantic interest or their boss.

Though the introvert might prefer more solitude, there are situations in which they will rise to the occasion and act outside their character and comfort zone.

And what about the extrovert?

Sometimes you might see them leave a social gathering early, or they might appear to be a wallflower, stuck to the wall far away from other people.

This would also be uncharacteristic of them, but you might learn they have just gotten released from their job or are newly single after a rough breakup.

People have dashes of both the introverted style and the extroverted style, depending on everything else going on in their lives.

Your social battery, tolerance for people, and interest in others depends a great deal upon the context in which you are doing that (at work, for instance) or upon your feelings and general mood (as may occur if you have to weather a severe storm in order to get to a lecture on time).

That’s why you can’t tell someone’s disposition simply by looking at their actions.

No one is exactly the same every day.

For weeks, you may be preoccupied by a presentation you have to make to the board of directors, and you might be introverted.

You might want some “quiet time” in your office to prepare for your leadership event.

Suppose you don’t have the luxury of spending time alone at your workstation and reflecting.

You may then realize that it is necessary to relate to your coworkers, whether you want to or not.

Of course, you want to avoid coming across as distracted, so you may enter a phase of extroversion to compensate for what looks like reckless mind-wandering.

In the interest of balance, you discover that you can operate quite well with interchanges between yourself and your colleagues.

It’s a good thing and means you have the ability to adapt to different circumstances like a chameleon.

With time, we can build a certain amount of tolerance to it, but that doesn’t mean it’s not still outside of our comfort zones.

The world is not black and white and made up of solely hermits and partygoers.

In truth, most introverts would become quite anxious if they were isolated for long periods.

They might even develop “cabin fever.” Likewise, most extroverts would feel their anxiety level rise if they had to attend one social event after another without enjoying some time to themselves.

For example, let’s say that a human resources manager at a manufacturing plant receives a complaint from a regular client who was having difficulty with a piece of equipment they bought from the plant.

It would be the human resource person’s job to remedy the problem.

So he would have to have the engineer contact the client about the problem.

By stereotype, engineers tend to be somewhat introverted and tend to steer away from customer contact.

Engineers are also stereotypically a tad irascible and find it frustrating when customers don’t follow the written instructions. In private, engineers sometimes even say, “Customers are stupid!” Of course, no one wants a customer to receive a call from the manufacturer and be called “stupid!” It is vital that introverts be able to shift focus and become extroverted to suit the situation.

In addition, they must bring control and patience into the dialogue.

Those are the ideal candidates for corporate positions.

During the introvert/extrovert encounter, the engineer needs to move away from his introverted role and patiently explain the issue to the client in a nonthreatening manner.

If you pigeon-hole yourself into being an introvert and consider yourself always as such, it can become a self-fulfilling prophecy.

You may limit yourself to a life of isolation and essentially live inside yourself.

You’ll do away with connecting with people and attempt to rely only on yourself.

Worst of all, you’ll limit your potential.

No great leader’s autobiography ever said, “I did it all myself.” On the other hand, if you determine that you are exclusively an extrovert, you may restrict yourself and fail to open up your mind to educational possibilities that can advance your career and make more money for yourself and your family.

Essentially, you might find yourself distracted and caught up in the moment instead of planning and engaging in periods of deep work.

This unfortunately happens to students who go to college and spend most of their nights partying.

Most of us have seen that happen.

Having a combination of introverted and extroverted traits make us more capable and adaptable in anything we want to do.

It is what composes the various careers we undertake.

Without adventurers, we wouldn’t explore the world.

Without writers, our minds would not be enlightened.

This happy variety makes life worth living—and allows you to live it to the fullest.

It also produces challenges that help us grow and reach our full potential.

Ninety-nine percent of people are ambiverts.

From a person who is predominantly introverted, we expect at least some extroverted behaviors; otherwise, we feel like we are talking to a robot.

From a person who is predominantly extroverted, we occasionally expect silence and sedate behaviors; otherwise, we feel like we are talking to someone who won’t remember our name later. Ultimately, it’s about moderation and balance.

We are all capable of showing a wide range of emotions.

We would quickly lose heart if our lives were always spent in cavorting with friends or secluded in the solitude of our dark rooms.

Life calls us to both action and thought.

A band that just plays one note merits no applause.

Society needs us to be dynamic in order to evolve.

Just like the popular labels of introvert, extrovert, and ambivert, people have started classifying themselves as extroverted introverts and introverted extroverts.

An extroverted introvert derives energy from being alone yet participates in social activities and enjoys them, for the most part.

After exploring the vistas of other people’s experiences, the introverted extrovert needs time to reclaim his individuality and uniqueness.

That is the time they solidify the elements within themselves that are beautiful and meaningful.

That is the time they establish an identity that makes them distinct—different from all others they know.

These are all different ways to define ambivert.

They are just different names for the exact same thing.

Remember that the traditional introvert/extrovert scale is a false dichotomy.

People may lean one way or the other, but all that really means is that they are still somewhere in the middle.

That is the way it is supposed to be.

Despite the labels or categories, we are more similar to each other than we like to readily admit.

We won’t benefit from living up to our own expectations instead of exploring and destroying them.

To stubbornly adhere to a label or side of the spectrum is also to deny the true complexity of our human nature.

It is that which makes us real, three-dimensional beings.