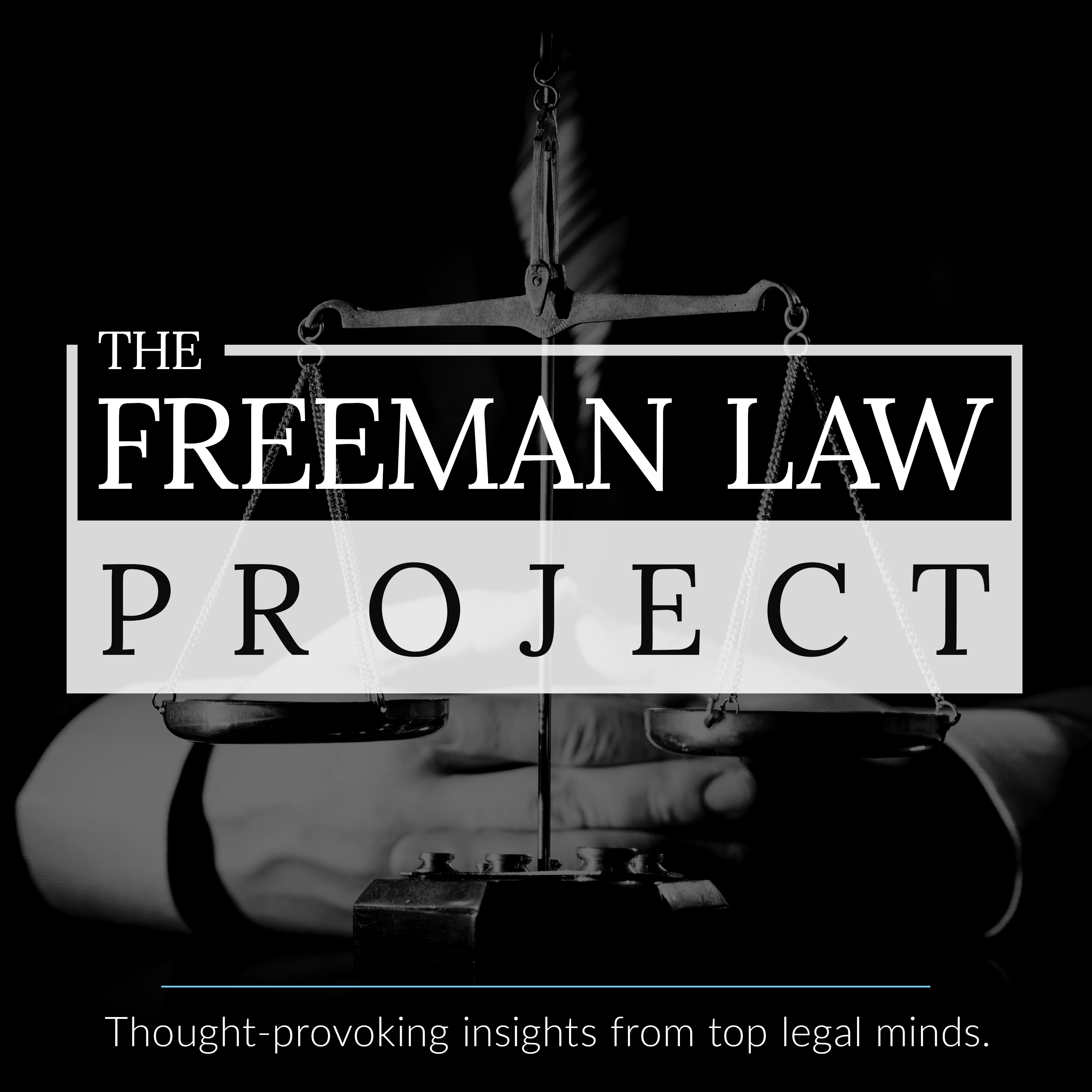 Jason B. Freeman and Matthew L. Roberts of Freeman Law, PLLC discuss the recent 5th Circuit decision in U.S. vs Bittner. The case involves the US Court of Appeals for the Fifth Circuit, who issued its opinion on November 30, 2021. Jason and Matt break down the court's opinion and provide insights on what it means.

Welcome to the Freeman Law Project, a podcast with thought-provoking insights on tax and white collar matters, the art of trial lawyering, and the most influential legal issues of the day. Brought to you by some of the nation's top legal minds. And now your host.

Welcome back, everybody, for season two of the Freeman Law Project. I'm here with my colleague, Matthew Roberts. Matt?

Jason, always glad to be here.

Good to be back. So like I said, we're back for season two. Kicking it back into high gear. And we're gonna talk today on a subject that's been near and dear to our hearts for quite a while. Uh, FBAR penalties. And particularly, we're gonna get into some nuances dealing with the non-willful penalties and whether it applies per account or per form. Before that, just a quick, quick primer for those who are not versed in the subject. The FBAR is a form, a reporting form that stems from the Bank Secrecy Act, which was actually enacted by Congress back in 1970.

It's been around with us for a while, but it really came into vogue in more recent years, a decade plus. Many of you are familiar with some of the surrounding consequences of failures to file FBARs, including the wild growth of the Offshore Voluntary Disclosure Program back in the '09 forward period as well as the streamlined compliance filing procedure. Of course, Matt and I and others at our firm have written pretty extensively on all of those subjects on our firm insights blog.

But the FBAR penalty has kind of been at the heart of that resurrection of international tax compliance. Although interestingly, it's technically not a tax form because it arises out of the Bank Secrecy Act, which is codified under Title 31. The act, again, requires US persons having foreign accounts, technically having a financial interest in a foreign account or having signatory authority over a foreign account, to report those accounts to the US government for any year that those accounts aggregate to more than $10,000.

And there are several types of penalties. Notably there's a willful penalty that applies where the government believes or can establish that there has been a willful failure to file the FBAR. And that penalty is typically the draconian penalty that you hear about. It can be up to half the balance in the account during any given year or accounts. The other primary variety of FBAR penalty is the non-willful variety. The non-willful or negligent penalty provides for an inflation index $10,000 penalty per pop.

But therein lies the ambiguity and the issue. What is per pop? So, let's kind of transition here and talk about some of the recent cases that have come out and the case law on this. Matt, I know you have been following this pretty closely. Where do we start this story?

Well, we really start with a Ninth Circuit case. And that's from the Ninth Circuit, which includes California, Arizona, Oregon, Hawaii, etc. That's the case of US vs. Boyd that came out earlier last year. It found that a violation for purposes of a non-willful FBAR penalty is going to be essentially per year or per form. And we'll come to why that's important here in a second when I give you an example. But that case and a handful of other district court decisions, it's held that that was the law. It was gonna be imposed per form, per year.

Then, in late part of last year, November 30th of 2021, you had a Fifth Circuit decision, that includes Louisiana, Texas, and Mississippi, and US vs. Bittner, that came out with a completely opposite result. They held that a violation is going to be per bank account and not per form. And the reason this is significant, let's just do a quick example. Assume you've got a taxpayer who has 20 foreign accounts for a period of three years. And hasn't filed FBARs and had an FBAR reporting obligation. The IRS initiates an exam, finds out about the foreign accounts, and imposes a non-willful FBAR penalty for all three years.

Under Boyd, the Ninth Circuit decision, you're going to have the penalty, the non-willful penalty be 10,000 per year adjusted for inflation. Or about $30,000. Under Bittner though, that taxpayer, just because they're in a different geographic region, is going to have 10,000 penalty per account. So that's 20 accounts per year, 200,000 per year, or 600,000 in penalties. So a drastically different result just on the basis of where the taxpayer resides. And that's the current landscape.

I'll note that Bittner was decided November 30th, 2021, but they do have the option, Mr. Bittner does, to file a motion for a rehearing or en banc review. That's gonna be due this Friday, January 14th. So we'll see if they come out and try to get the whole panel of the court to kind of look at this issue more closely.

Matt, I'll tell you, if they don't, and pardon the pun, that will be a Bittner pill to swallow.

If that is the law that we are operating under in the Fifth Circuit until the Supremes speak on the issue, I guess. But it is teeing up for a circuit split here. And so no indication right now of anything coming out of the, you know, any en banc requests for rehearing. But, it will be interesting to follow. You know, Matt, you talked about the landscape here. And I thought it reminded me, there was a very good post by our colleague, Zach Montgomery. Zach posted on our firm blog, it's titled A Current "Playoff Picture" of Non-Willful FBAR Violations. And he did a good job of really consolidating various circuits across the country and how they looked.

One thing I had to point out. This may get a little off topic, but I had to point out and laugh is, he has a map on there, and that map sets out the circuits. It color codes them red and blue and shades thereof. And this may be the only time in modern history where you will see California and the Western states in all red and Texas, the Southern states, and Florida in blue. So, you know, this will... if you're just happen to be scouring the Internet and come across this, it will definitely catch your attention.

But it is interesting. I mean, we've got the Boyd decision in the Ninth Circuit, so the Western portion of the country. You've got Bittner here in the- the Fifth Circuit, at least for the time being. Now Bittner arose out of, was it Judge Mazzant, I believe?

It was Judge Mazzant at the lower level.

Of the Eastern districts of Texas, Judge Mazzant is, you know, I'll tell you, is a fine judge. I hold him in high regard. And he's generally recognized as a judge who is intellectually honest and takes his job seriously. And he had a very you know, I read that opinion a number of times over the last couple of years now. It's you know, very well-reasoned and, well, of course, government councils was excellent on it. Mr. Bittner was represented and continues to be represented by a highly esteemed council.

But you know one thing that jumped out to me in looking at the Fifth Circuit's opinion was the Fifth Circuit, at least... And call me old school, Matt, but the Fifth Circuit came in and really revisited Mr. Bittner's testimony, really honed in on some of his responses to questions. And in effect, drew the opposite conclusion from those responses rather than finding them to indicate or be consistent with non-willful or rather than discarding them. As a fact-finder trial judge, Judge Mazzant here would normally be entitled to do and be given the deference to be the fact-finder.

The appellate court here drew a different conclusion. And look, to me, this is, this gets into this metaphysical distinction between when an issue is a fact issue and a legal issue. You know, this is a fact issue where I come from. But you know, the appellate court looked at this and said, "No. We draw a different conclusion. Don't know how you could conclude otherwise," they say. And this taxpayer was not non-willful.

Jason, just another part on that. It was very interesting, in Bittner, there was a motion for summary judgment because there's reasonable cause defense as well. So you've got a legal determination whether someone was non-willful. And then the defense is, as we usually use a reasonable cause defense as to whether they should get out of or negate the penalties. Taxpayers strenuously objected to it being disposed of at the motion for summary judgment state. Essentially arguing it so factually intensive, you know, and it shouldn't be disposed of that, at that point in the proceedings, both Judge Mazzant and the Fifth Circuit actually held that it was.

So just something to keep in mind. I think generally as attorneys or taxpayers, we tend to think, especially when it goes to litigation, that issues of reasonable cause are not really appropriate for summary judgment. It looks like in some cases, judges may actually find otherwise.

Good point, Matt. So what's your prediction here? What are we gonna see at the appellate level? And is SCOTUS gonna take this up?

I think it's a highly significant issue, that especially with the IRS really bearing down right now, you know, as many FBAR cases as we have and we're seeing all across the country to have these kind of different results for a non-willful penalty and I mean, it's dramatic, you know? In the case of Mr. Bittner, it was a $2.6 million penalty when it would've been approximately 50,000 if they had gotten the per year, per form. So drastically, different results just based on where you live. I think that's perfect for the Supreme Court of the United States to address.

I also think Congress if they have the ability to do so in this kind of locked, political landscape, should certainly address it if the Supreme Court does not. But that's my prediction. Curious if you disagree.

No, I don't. I think this is teed up. I think the Supreme Court may decide to wait and see how other circuits weigh in on it. But we've got a classic, you know... If this stands, we've got a classic conflict that certainly could give rise to the Supreme Court granting cert on this case. And it's definitely an important issue. You know, an important issue and an increasingly, at least as the historic trends have gone, globalized economy with US persons, citizens living all over the world, subject to reporting obligations that come with draconian penalties that, for a long period of time, while these were on the books, were not well-known among professionals or taxpayers.

I think it's an important issue and a circuit split. I would love to see the Supreme Court take this up, and you know we'll be following it closely. Okay, Matt, well, we will keep our eye on this one. We'll have more podcasts to come soon. And we will be diving back, in future episodes, back into the FBAR issues and honing in on some of the other related issues. So Matt, with that, thanks for joining today.

Thanks for having me.