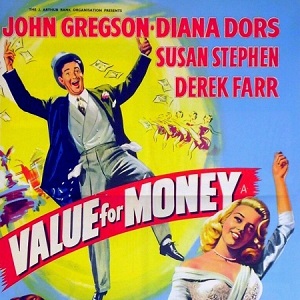 We look at two extraordinary lives in this episode. The film under discussion is Value for Money (1955) about a naive northern man played by John Gregson who becomes captivated by a glamorous West End showgirl played by Diana Dors. Hmm…. sounds familiar…. We meet Diana’s biographer, Anna Cale, to talk about the film and about the star’s tumultuous private life.

As is this two part biopic of Diana - Blonde Bombshell

One of Diana’s early boyfriends was Michael Caborn-Waterfield, known colloquially as “Dandy Kim”. The name Kim was originally given to him by nuns at his prep school to distinguish him from another Michael, a Mike and a Mick. It was Diana who dubbed him “Dandy” because of his taste in clothes and it stuck.

Dandy Kim was best known for being the founder of Ann Summers but he was infamous well before that. We talk to his biographer, Nigel Hamilton-Walker

Read the obituary of Dandy Kim published on the website of his Alma Mater, Cranleigh School

What on earth is Shoddy and Mungo?

Don’t buy Anna Cale’s, “The Real Diana Dors” from Amazon – Jeff Bezoz definitely doesn’t need your money. Buy it directly from the publishers and get a discount while you’re at it.

Presumably for a limited time only, there appears to be one copy of Kim’s late 60s pioneering sex manual, Variations on a Sexual Theme available to buy on Ebay. Don’t be fooled by the author’s name – he wrote it under a pseudonym to avoid publicity from the tabs. Snap it up while you can!