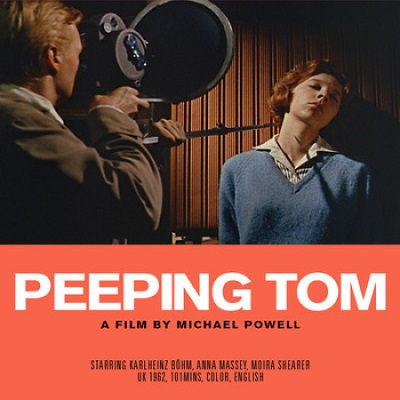 Famously, Peeping Tom (1960) pretty much ended the career of its director, Michael Powell, thanks to the universally horrendous reviews it received on its release. Also famously, the film’s reputation was rehabilitated by, among others, Martin Scorsese who counts it amongst his favourite films of all time. In this episode, Dom is joined by film producer, Colin Vaines, to talk about this controversial masterpiece.

The Powell & Pressburger Pages is an excellent resource for all your P&P needs.

In the last episode, we talked to David McGillivray about the smutty smutster, Harrison Marks. This time, we’re talking to Stephen Fenerty about Pamela Green – not because she was Harrison Marks’s muse (which she was) but because she has a cameo in Peeping Tom.

Harrison Marks’s, Naked as Nature Intended (1961) starring Pamela Green is said to be the first British “nudie” film and it has turned up on YouTube. See it below – it’s very mild stuff but in the opinion of the enormous Soho Bites Editorial Standards team, it is unsuitable for viewing at work.

*UPDATE* Naked as Nature Intended has been removed from YouTube for violating its Community Guidelines but….

… you can see one of Pamela’s 8mm silent “loop” films, Xcitement!, on the BFI Player HERE. This is also ever-so-slightly NSFW.

As promised in the show, you can hear the unedited version of the conversation with Colin Vaines, including extra banging from Lewis Hamilton’s restaurant, HERE