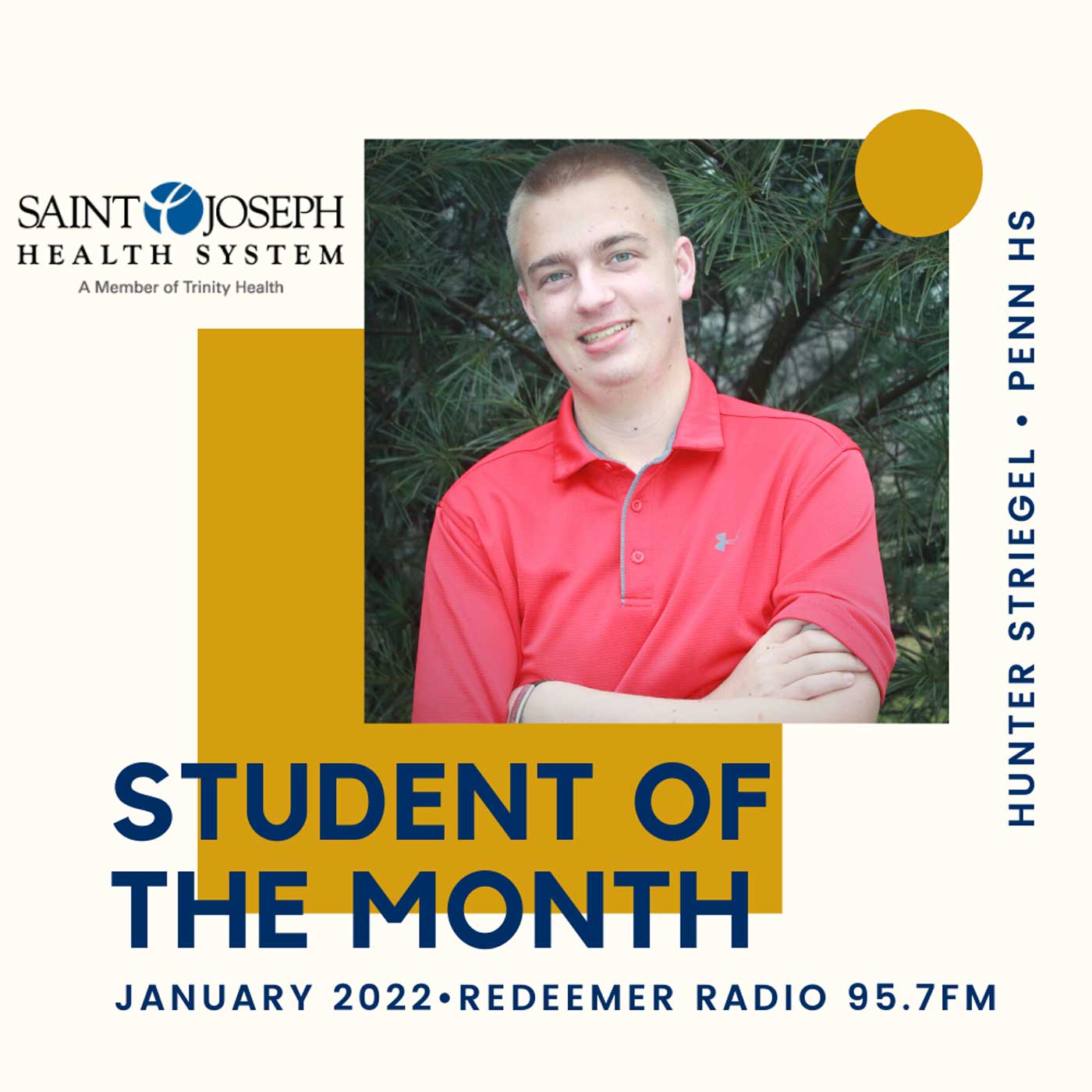 Hunter Striegel remembers sitting in class in 4th or 5th grade at St. Pius X Catholic School in Granger when a demonstration for handbells was shown. He was hooked.

"I like the community aspect of it," Hunter explains. "Everyone is working towards the same piece, and it helps me to focus on the Mass. When I'm not playing, I have nothing else to do but to pay attention to what is going on and it helps me connect with the music a bit more."

Hunter has served in youth and now adult handbells since and has also been an altar server at St. Pius.

"I feel like that helped me develop my Catholic education and going to Church has rounded that out," Hunter explains. "Going to Pius solidified most of it and what I believe. Public school has been a place to show those values and help people out."

He says home life has nurtured his faith as well. Home life also brought an emphasis on grades where Hunter excels greatly. He sports a 4.22 GPA at Penn.

"When I was little, my parents instilled in me that grades are important and that they took precedent over extracurricular activities," Hunter says. "That's really helped me in my high school career to not just hang back and do the easy stuff. I've kind of pushed myself, taking a lot of AP classes and that sort of stuff."

With that said, Hunter takes part in a number of extracurricular activities, including being captain of the tennis team.

"It was really fun," Hunter says of being captain this last year. "It was a bit stressful this summer because supply chain issues made it hard to get uniforms. It was really fun to lead the team and being that leader. I was kind of in the shadows my freshman and sophomore years, so it kind of felt good to be that leader of the team."

And it's those lessons growing up that helped him as a captain, "Catholicism instills those good values within me. It helps me step up to be that leader rather than a follower. It just helped me overall to be a good person."

Excelling at tennis led Hunter to take part in Buddy Up for Life, an organization that helps those with special needs exercise and play tennis. At first, Hunter signed up as a way to get some community service for National Honor Society but as he did it more, he realized how much he enjoyed it.

"It's really great seeing all their smiles and faces and interacting with them," Hunter says. "It feels super good to make their day."

He's enjoyed the experience so much, he finds himself at South Bend Racquet Club almost every Saturday participating. Hunter is also a part of the Esports Club at Penn and plans to major in computer science in college.

He takes great pride in being the oldest sibling in his family, although he admits it's not always easy.

"It can be a handful," Hunter says. "Some of my siblings are a little wild but I babysit them a lot when my parents are away and take them places. I try and be a role model for them as what they should become. They do kind of follow after me so I do have to watch what I do and what I say because they could be watching. It's nice to be that role model for them."

Hunter says he wants to give a shoutout to his parents, all the people at St. Pius who helped him along the way and his teachers.