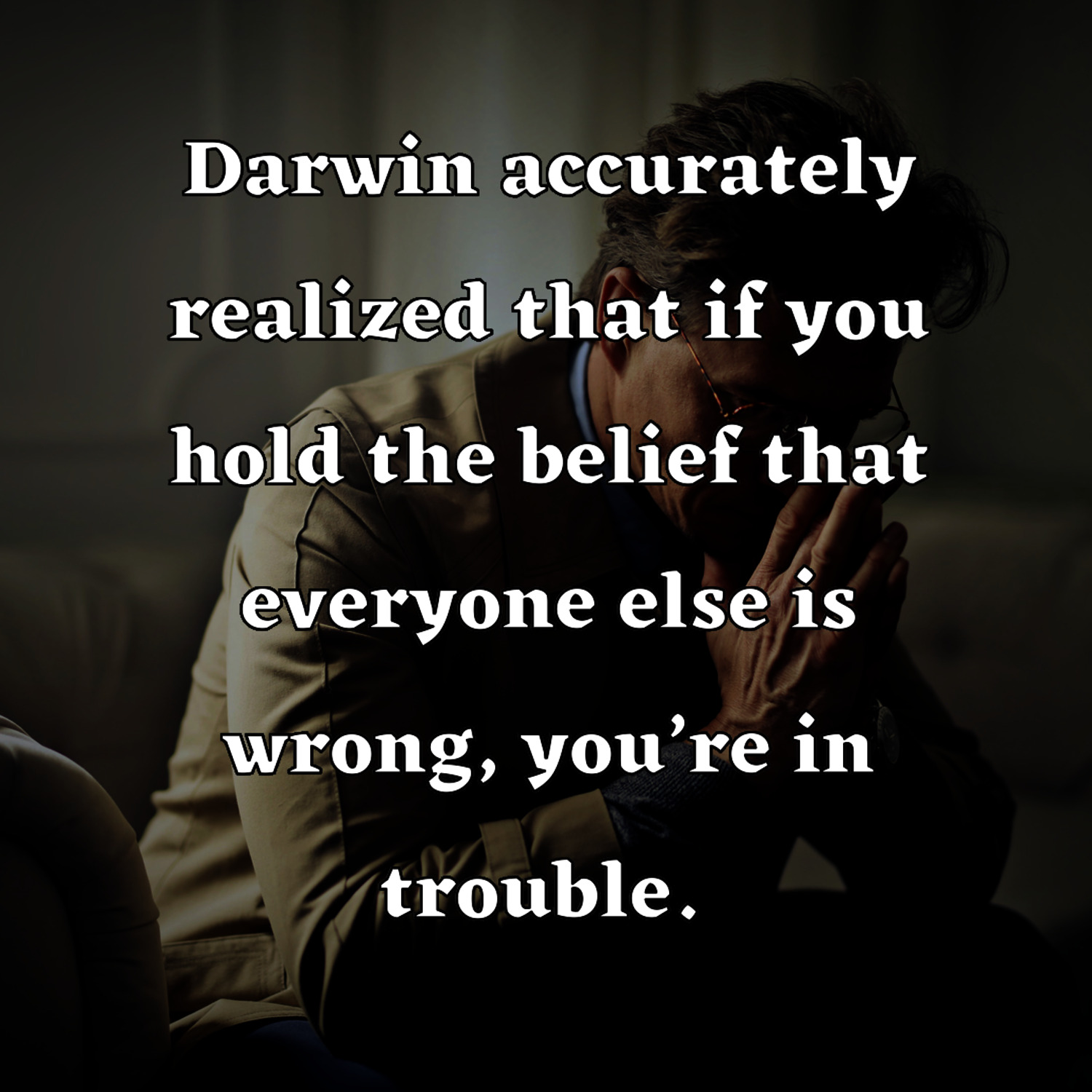 Elon Musk and his usage of first principles thinking is all about rejecting what is thought to be fact. He describes a process where you identify your assumptions in the face of solving a problem, you break them down, and then you solve the problem by breaking down old barriers. Once you realize that truth is not as set in stone as you think it is, possibilities begin to unfold. Reinvent the wheel—because maybe you can find a better one.

Charles Darwin lived his remarkable life according to one simple golden rule: immersing yourself in the world of your opposition and contrary opinions. This is how you can legitimately test the truth of your opinions or arguments. It is the ultimate example of avoiding confirmation bias. He turns his doubts and skepticism onto himself rather than others, which is the far more normal course of action.

To realize his concepts, Musk goes through a short 3-step process to blow past assumptions in the face of a problem to solve. For our purposes, let’s suppose our problem is to recreate Grandma’s cake with a lack of the ingredients in the recipe.

Identify and define current assumptions. These are things that appear to be givens, or unable to change. Grandma’s cake requires a certain mixture of flour and eggs. Or does it?

Break down the problem into its first principles. Something edible resembling a cake must be presented. A cake typically requires X amount of eggs, and Y grams of flour. It needs heat and a container.

Create new solutions from scratch. Grandma’s cake is unable to be created with the current ingredients we have, but we can find adequate substitutes for everything missing. What substitutions can be made in the recipe? Does it even have to be flour or eggs at all?

To see Musk’s formula of first principles thinking in action once more, enter the Hyperloop. Musk wanted to solve the problem of fast and efficient transportation between Los Angeles and San Francisco. (Who doesn’t?)

The current assumptions around such a solution are numerous. The obvious frontrunner would be a high speed rail system, similar to Korea and Japan’s subway systems. However, it’s an assumption that his new method of transportation would need to resemble any existing systems. What about reinventing the wheel?

The fundamentals of his problem were that he wanted a safer, faster, and cheaper method—it could conform to existing transportation systems, but it didn’t need to. With those requirements, what kind of new system could be created? That’s when the Hyperloop was born, and if you’ve seen pictures of it, it resembles an underground roller coaster more than a rail system. But that doesn’t matter if the problem is solved.

You can use this model of thought for just about anything—building a business, learning history or the arts, even analyzing an emotional or personal issue. The problem or ambition doesn’t even need to be that specific to think about it in terms of first principles thinking. Here is an example of how to use it for everyday purposes.

Your problem is that you don’t seem to have enough time in your schedule to exercise sufficiently to lose weight.

Assumptions: weight loss depends on exercise, you don’t have enough time, you need to lose that much weight, your schedule is too busy.

Fundamental principles: weight loss depends mostly on diet, you can make time if you stop watching so much television, your schedule still allows a few 20-minute breaks throughout the day, and you don’t actually need to lose that much weight.

New method: A combination of short, quick workouts, and eating healthier by preparing all of your week’s meals on Sunday.

Remember what we’ve been saying about clear thinking throughout this book: we seek to understand, not necessarily to find a complete and final solution. Just by going through the investigative process that first principles thinking espouses, one can see more clearly all the elements, individual components and parts of a situation. You get to see the ultimate truth in things. In some cases, this clarity of thought can manifest in creativity and innovation.

First principles thinking isn’t easy; if it were then everyone would do it. But if you practice it long enough to get into the mindset, it can give you a whole new understanding of the world that nobody else would come up with. That’s the ultimate goal of all clear thinking.

if Darwin attended Harvard in: 1986

Instead, Darwin was relentless about learning. He devoured information about all the topics he was interested in pursuing. He hoarded facts and was hyper-diligent about taking notes. His ability to hold attention was legendary, and when it came to testing his work ethic was tireless. Darwin’s thinking was purposely slow because he was so fastidiously detail-oriented. He believed that to have any authority on any topic one needed to develop deep expertise on it, and expertise doesn’t happen overnight (or in a month, or in a year). The point is that Darwin is regarded as one of the ultimate examples of the importance hard work and diligence in surpassing natural intelligence.

Darwin’s method was so all-encompassing that he even gave deep attention to information that countered or challenged his own theories. This approach forms the backbone of his golden rule as he expressed in his autobiography. The very basic guideline of Darwin’s golden rule was to be more than just open to contradicting or opposing ideas—indeed, Darwin gave it his fullest attention:

“I had, also, during many years, followed a golden rule, namely, that whenever a published fact, a new observation or thought came across me, which was opposed to my general results, to make a memorandum of it without fail and at once; for I had found by experience that such facts and thoughts were far more apt to escape from memory than favorable ones.”

Darwin completely immersed himself in evidence or explanations that went against his findings because he was aware that the human mind is inclined to dispose of those contrary views. If he didn’t investigate them as fully as he could, he’d be likely to forget them, and that created mental dishonesty. Darwin knew that his own instinctual thinking could be a hindrance to finding the truth as much as it could help, and he established a way to ensure he wasn’t missing out on any information.

Darwin handled all this conflicting information responsibly. He genuinely considered material that might have disproved his assertions, and took pains to fully absorb every single scenario, anomaly and exception to his theories. He didn’t filter out information that didn’t support his beliefs; he was utterly immune to confirmation bias. More than anything else, Darwin didn’t want to be careless in finding the truth—he knew that a half-cocked assertion solely intended to persuade others without much thought was intellectually dishonest. Doing so required more time and effort on his part, but he was committed.

Of course, the Darwinian Golden Rule calls back to intellectual honesty and the maxim “Strong opinions but held lightly.” It assumes intellectual humility, as being unattached to any stances or theories and simply following the evidence.

Uniquely, Darwin forces a dialogue of skepticism back to himself, instead of to others in defensiveness. To himself, he would direct questions such as: What do you know? Are you sure? Why are you sure? How can it be proved? What potential errors could you have made? Where is this conflicting view coming from and why? As you can imagine, it takes quite a bit of self-discipline to constantly double-check yourself.

Darwin accurately realized that if you hold the belief that everyone else is wrong, you’re in trouble.

Another hallmark of Darwin’s thinking was his exhaustive attention to detail. One of Darwin’s biographers, David Quammen, states the following about his borderline obsessive tendencies:

“One of Darwin’s great strengths as a scientist was also, in some ways, a disadvantage: his extraordinary breadth of curiosity. From his study at Down House he ranged widely and greedily, in his constant search for data, across distances (by letter) and scientific fields. He read eclectically and kept notes like a pack rat. Over the years he collected an enormous quantity of interconnected facts. He looked for patterns but was intrigued equally by exceptions to the patterns, and exceptions to the exceptions. He tested his ideas against complicated groups of organisms with complicated stories, such as the barnacles, the orchids, the social insects, the primroses, and the hominids.”

For eight years he studied and compared the similarities and differences of barnacles, taking to the seas on the HMS Beagle to discover the differences between individual specimens of practically immobile crustaceans. Most people, me included, would probably go crazy spending nearly a decade on finding the subtle differences between notably unexciting creatures who largely look the same, whose life goals basically center around finding a surface to permanently affix themselves to.

Darwin, though, had an unusual passion for this particular line of study. He thoroughly investigated each mollusk he came upon to find the smallest differences between each one. He sorted and classified the specimens he studied. He wrote his observations about mollusks every day.

Why? Because he was a glutton for punishment? Yes.

But also because he knew that his findings would be disputed if he didn’t become an expert in his studies, and there was no other way to become an expert than to get intimately familiar with each microscopic feature and detail in his subject. The intense interest paid off, as his studies on barnacles proved to be a major foundation for his career-defining work, On the Origin of Species.

Thoroughness is truth, and there could be no delusions of ease or comfort in finding truth.

Along the way he found information that countered or qualified his own beliefs. But instead of disposing of them, he dispassionately and objectively studied every major and minor argument. Darwin knew he had to comprehend the arguments against his own theories more thoroughly than someone who made those arguments. This isn’t how most people think, but if it’s done well and with total dedication to detail, you can establish yourself as an effective thinker.