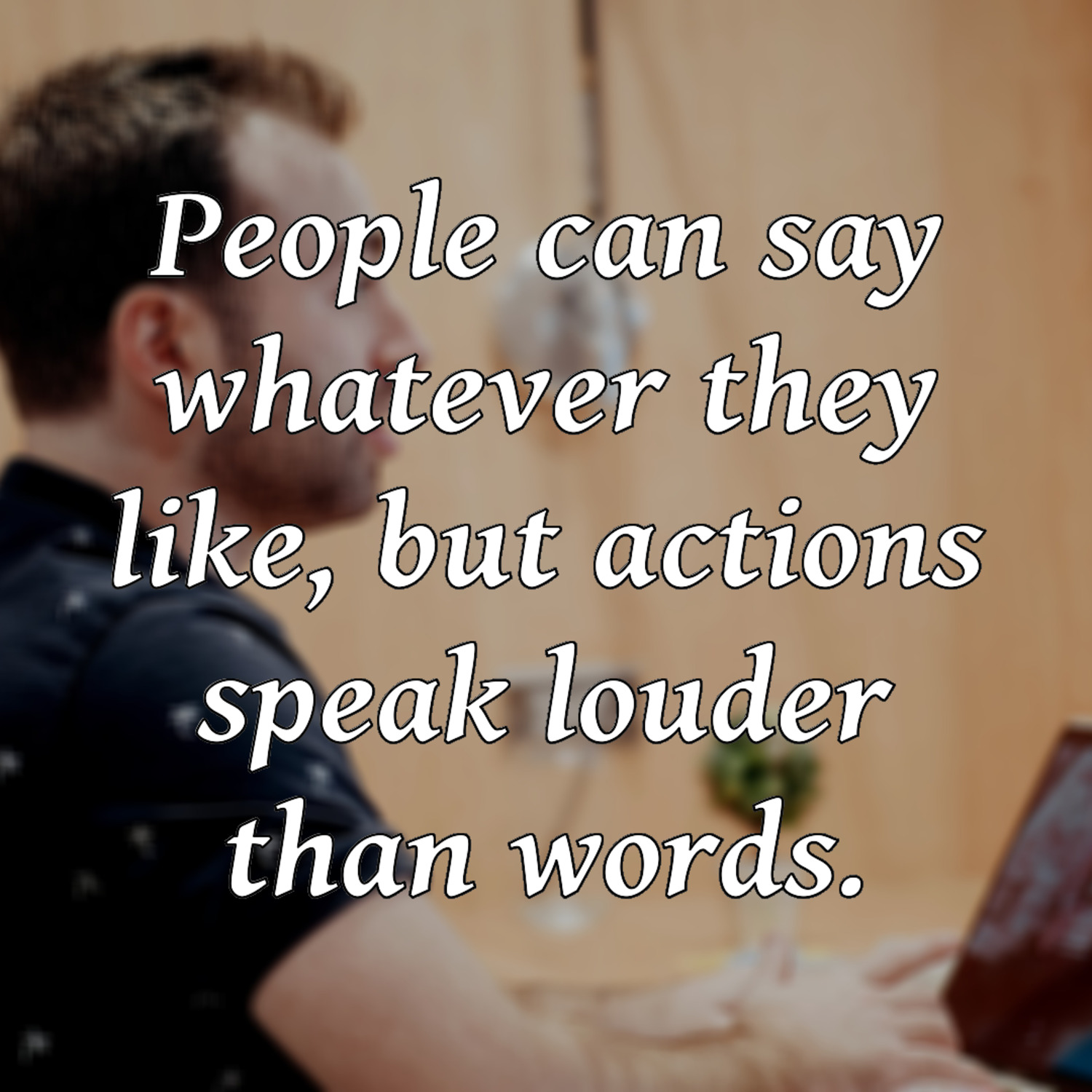 Finally, we get right into the thick of it. How can we read and analyze people just through sight and observation? We cover two primary aspects: facial expressions and body language. It’s important to note that though many aspects have been scientifically proven (with physiological origins), we can’t say that simple observations are foolproof. It can never be definitive because there are too many external factors to take into account. But we can better understand what typical things to look for and what we can glean from them.

The idea that people cannot help but reveal their true intentions and feelings one way or another is an appealing one. People can say whatever they like, but it’s always been understood that “actions speak louder than words” and that people’s facial expressions or body language can inadvertently reveal their deepest selves. We are in effect communicating all the time, sending out information about our intentions and feelings—but only a small fraction of this is verbal.

Observing people’s actions and behavior in real time is what we most commonly understand to be analyzing people. It might seem natural to look to people’s physical bodies in space to intuit what’s going on in their heads, and there’s plenty of scientific evidence to support these claims. Physical appearance can tell you a lot about a person’s feelings, motivations, and fears, even if they’re actively trying to conceal these. In other words, the body doesn’t lie!

Nevertheless, this approach to understanding people’s motivations is not foolproof. When we’re interacting with others and trying to understand what makes them tick, it’s important to be cautious in making assumptions. We’re all individuals, and context is very important. Though we can use various methods to read facial expressions and body language, it pays to remember that no single piece of information is enough to “prove” anything, and that the art of reading people this way comes down to taking a holistic view of the full scenario as it unfolds in front of you.

Look at my Face

We all know how to read macroexpressions—those facial movements that last up to four seconds in duration—but there are quicker, more fleeting expressions that are so fast, they could easily be missed by the untrained eye. According to Ekman, facial expressions are actually physiological reactions. These expressions occur even when you’re not around anyone who could see them. He found that across cultures, people used microexpressions to display their emotions on their faces in very predictable ways—even when they were attempting to conceal them or even when they themselves were unaware of the emotion.

His research led him to believe that microexpressions are spontaneous, tiny contractions of certain muscle groups that are predictably related to emotions and are the same in all people, regardless of upbringing, background, or cultural expectation. They can be as quick as one-thirtieth of a second long. But catching them and understanding what they mean is a way to cut through what is merely said to get to the deeper truth of what people feel and believe. Macroexpressions can be, to some extent, forced or exaggerated, but microexpressions are understood to be more genuine and difficult to fake or else suggestive of concealed or rapidly changing emotions.

Within the brain, there are two neural pathways related to facial expressions. The first is the pyramidal tract, responsible for voluntary expressions (i.e., most macroexpressions), and the extrapyramidal tract, responsible for involuntary emotional facial expressions (i.e., microexpressions). Researchers have discovered that individuals who experience intense emotional situations but also external pressure to control or hide that expression will show activity in both these brain pathways. This suggests that they’re working against one another, with the more conscious and voluntary expressions dominating the involuntary ones. Nevertheless, some tiny expressions of the real emotion may “leak” out—this is what you’re looking for when you attempt to read a person in this way.

So just exactly how does one learn to read these expressions? Can you really decode a person’s deepest feelings just by looking at a twitch of their nose or a wrinkle in their brow?

According to Ekman, there are six universal human emotions, all with corresponding minuscule facial expressions. Happiness is seen in lifted cheeks, with the corners of the mouth raised up and back. Wrinkles appear under the eyes, between the upper lip and nose, and in the outside corner of the eyes. In other words, the movements we’re all familiar with in an ordinary smile are there on a micro level too.

Microexpressions suggesting sadness are also what you’d expect. The outer corner of the eyes droops down, along with the corners of the lips. The lower lip may even tremble. Eyebrows may form a telltale triangle shape. For the emotion of disgust, the upper lip lifts and may be accompanied by wrinkles above it and wrinkles on the forehead. The eyes may narrow slightly as the cheeks are raised.

For anger, eyebrows lower and tense up, often at a downward angle. Eyes tighten, too, and the lips may be pursed or held stiffly open. The eyes are staring and piercing. Fear, on the other hand, entails similar contractions but upward. Whether open or closed, the mouth is tense, and both upper and lower eyelids are lifted. Finally, surprise or shock will show itself in elevated brows—rounded rather than triangular, like with sadness. The upper eyelids lift up and the lower eyelids stretch downward, opening the eyes wide. Sometimes, the jaw can hang loosely open.

As you can see, microexpressions are not very different from macroexpressions in the muscles that are involved; the main difference is in their speed. Ekman demonstrated, however, that these quick flashes of muscle contraction are so fast that people miss them: ninety-nine percent of people were unable to perceive them. Nevertheless, he also claims that people can be trained to look for microexpressions and in particular learn to detect liars, a classic example of saying one thing and feeling another.

Ekman claims to be able to teach his technique within thirty-two hours, but for those of us who are curious about using the principles in our own lives, it’s easy to start. Firstly, look for discrepancies between what is said and what is actually demonstrated through facial expressions. For example, someone might be assuring you verbally and making promises but showing quick expressions of fear that betray their real position.

Other classic indicators that you are being lied to include lifting the shoulders slightly while someone is vehemently confirming the truth of what they’re saying. Scratching the nose, moving the head to the side, avoiding eye contact, uncertainty in speaking, and general fidgeting also indicate someone’s internal reality is not exactly lining up with the external—i.e., they might be lying.

Again, it’s worth mentioning here that this is not a foolproof method and that research has mostly failed to find a strong relationship between body language, facial expression, and deceitfulness. No single gesture alone indicates anything. Many psychologists have since pointed out that discrepancies in microexpressions can actually indicate discomfort, nervousness, stress, or tension, without deception being involved.

Nevertheless, when used as a tool along with other tools, and when taken in context, microexpression analysis can be powerful. Granted, you’ll need to stare quite intently at the person and observe them in a way that’s uncomfortable and too obvious for normal social situations. You’ll also have to weed out tons of irrelevant data and decide what gestures count as “noise” or meaningless idiosyncrasies.

At any rate, people who lack the required training have been shown to be astoundingly bad at spotting liars—despite feeling as though their gut intuitions about others’ deceit is reliable. This means that even a slight increase in accuracy you might gain from understanding and implementing the microexpression theory may make all the difference. A microexpression may be small, but it’s still a data point.

All this talk of unmasking liars may make this technique seem rather combative and underhanded, but Ekman is careful to point out that “lies” and “deceit,” as he frames them, can also indicate the hiding of an emotion and not necessarily any malicious intent. There is certainly an allure in playing detective and uncovering people’s secret feelings, but in reality, the use of microexpression analysis is a bit like CSI: it always looks a bit more impressive on TV than it is in real life. Furthermore, the goal in developing the skill of microexpression analysis is not to play “gotcha!” to our friends and colleagues, but rather to enhance our own empathy and emotional intelligence and foster a richer understanding of the people around us.

If you’re not convinced about using microexpressions to detect deception, another perspective is not to look for lies or classify expressions according to their duration, but rather to look at what an expression typically conveys. Then, depending on context and how the expression compares to what’s said verbally, you can come to your own conclusions.

Nervousness is typically behind things like tightening the lips or twitching the corners of the mouth very quickly toward the ear and back. Quivering lips or chin, a furrowed brow, narrowed eyes, and pulled-in lips may also indicate the person is feeling tense. If a person you know is normally calm and composed but you suddenly notice plenty of these little signs while they tell you a tale you don’t quite believe, you might infer that, for some reason, they’re nervous about telling it to you. Whether this is because they’re lying or because their story is simply uncomfortable to tell—only you can decide from context.

A person feeling dislike or disagreement might purse their lips tightly, roll their eyes, flutter their eyelids briefly, or crinkle their nose. They may also squint a little or narrow their eyes like a cartoon villain staring down the hero, close their eyes, or “sneer” a little in a slight expression of disdain. If a person opens the Christmas present you gave them and immediately proceeds to do all of the above, you might want to assume they don’t really like their gift, despite what they say to the contrary.

Those dealing with stress may find tiny ways to release that stress, giving themselves away even though for the most part they appear quite calm. Uncontrollable, fast blinking and making repetitive motions like twitching the cheek, biting the tongue, or touching parts of the face with their fingers can all indicate someone who’s finding a particular situation stressful. This might make sense when someone’s in a job interview or being questioned in connection with a crime but may be more noteworthy if you spot it in seemingly calm situations. This discrepancy gives you a clue that all might not be as it appears.

Pay attention also to asymmetry in facial expressions. Natural, spontaneous, and genuine expressions of emotion tend to be symmetrical. Forced, fake, or conflicting expressions tend not to be. And again, try to interpret what you see in context, and consider the whole person, including other body language.

Remember that analyzing facial expressions is a powerful method of understanding others that’s more than “skin-deep,” but it’s not foolproof. Every observation you make is simply a data point and doesn’t prove anything either way. The skill comes in gathering as much data as you can and interpreting the whole, emerging pattern before you, rather than just one or two signs. For this reason, it’s best to use what you know about microexpressions as a supplement to other methods and tools.