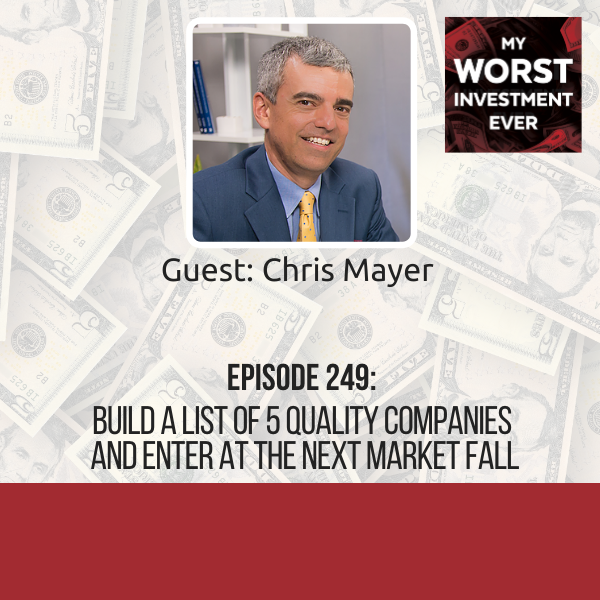 Chris Mayer is co-founder and Portfolio Manager of the Woodlock House Family Capital fund. He also blogs about the thing he loves the most, investing. He started his career as a corporate lender, which taught him about managing risk and how business works.

Next, he started his newsletter, called Capital & Crisis, which led him into 15 years of writing investment newsletters.

Chris has written four books: Invest Like a Dealmaker: Secrets from a Former Banking Insider; The World Right side up: Investing Across Six Continents; 100 Baggers: Stocks That Return 100-to-1 and How To Find Them; How Do You Know? A Guide to Investing, Wall Street, and Life.

“Valuation is important, but it’s secondary to quality. I won’t buy something just because it’s super cheap if it doesn’t have all the other quality aspects that I like.”

Taking advantage of the 2008 financial crisis

When the financial crisis hit the US in 2008, Chris reasoned that it would be an excellent time to start investing in the stock market. His strategy was to buy the cheapest available businesses and ignore the expensive ones. So he went ahead and found a couple of inexpensive companies.

The businesses that Chris bought into were not necessarily good businesses with a promising future; they were just cheap. But he knew he could easily sell them off later.

After the crisis, Chris sold off the companies here and there once they started appreciating or reaching his target price. He, however, didn’t make so much money to write home about.

He should have gone with the expensive options

The companies that Chris ignored because they were expensive at the time went on to recover after the market fall and continue to thrive. Had Chris paid attention to such companies and probably invested in just one or two instead of a handful cheap ones, he’d still be making money from that investment.

Buy the best not the cheapest

When looking for stocks to invest in, go for the very best companies. They may seem expensive, but in the long-term, these are the companies that are going to bring you the best return. Go for quality over price.

Investing is a long-term game

When it comes to investing, you have to think long-term. Most of the best performing businesses today were not built in a day. They have about 20-25 years backing their success.

Don’t be lured by a low price

Just because it’s cheap doesn’t mean you have to buy it.

Find five businesses that you would love to own and put them on a wishlist. Follow and keep an eye on them. Wait until you see a 20%-fall in the stock market and then go ahead and pick one and buy it.

Chris’s number one goal for the next 12 months is to find one high-value investor.

“Don’t give up. Be patient. It’s a tough game. Everyone makes mistakes, so you just got to keep soldiering on.”