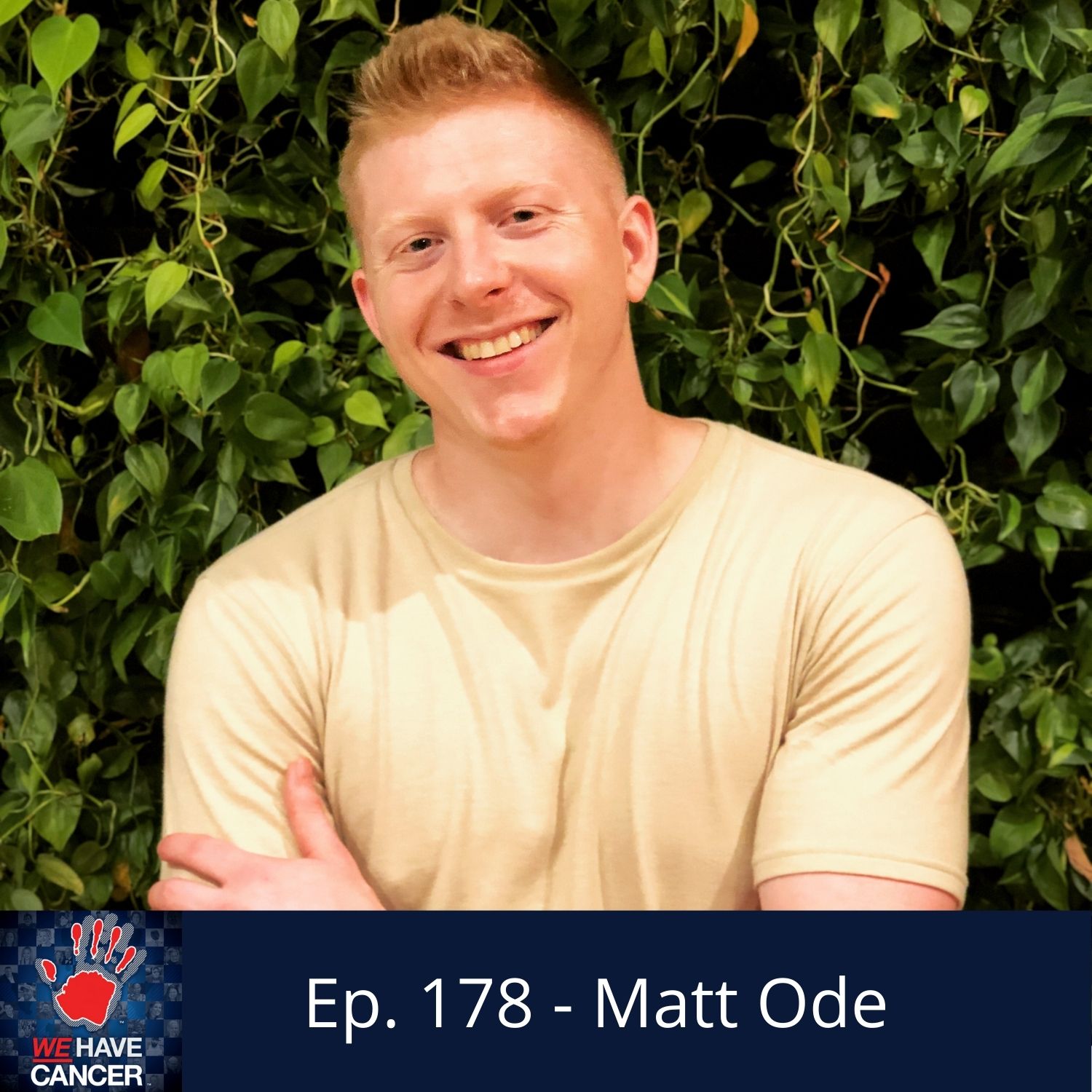 On this episode of WE Have Cancer, motivational speaker and testicular cancer survivor Matthew Ode shares his inspiring advice for seeking purpose and joy during your cancer journey. From the power of finding a supportive community to practicing vulnerability to dealing with body image struggles, Matt delivers his top tips with optimism and grace. Matt’s advice for finding peace and purpose is to focus on what you can control, and allow yourself to be supported and encouraged by your inner circle of loved ones.

Matt Ode was 24 when doctors discovered an 11cm tumor in his small intestine, and soon diagnosed him with stage 3 testicular cancer. He even fell into a non-induced coma for two weeks. Cancer free since March 2017, Matt has since founded Mustaches for Matt, started a supportive survivorship Facebook group with over 4000 members, and shares his story as a motivational speaker about overcoming adversity.

Matt says he always tries to find some joy in everything, and he doesn't change himself to make other people happy. He says, "Authenticity is the absolute key to attracting the right people in your life.” Matt believes the more vulnerable and authentic you are, the more comfortable others will feel when opening up to someone in their life.

Matt believes a lot of men’s mental health issues, in general as well as within the cancer community, come from holding in their emotions. When men can open up and share and be vulnerable, anxiety begins to dwindle and men can happily, freely express who they really are.

Matt speaks to the physical and mental effects of being a cancer survivor in your 20’s. He was a personal trainer before his testicular cancer diagnosis; a weightlifter at 8% body fat. In 8 months of intense treatment, Matt dropped from 185 to 110 pounds. To battle the body image issues, Matt says he would ask himself, "What's one thing I can do each day to progress a tiny bit?"

Exactly one year after Matt met his girlfriend, he was being released from the hospital and told he was finally cancer free. He and Lauren had just started dating when he received his diagnosis. Matt's faith is his north star, and he deeply believes that faith and loving support from his girlfriend and family are the two things that got him through treatment.

Matt says he had amazing support while he was actively battling testicular cancer, but afterwards when he didn’t want to go back to his old life, that’s when he says he lost some old friends. Matt shares his friends expected him to go back to his old self: going out on the weekends, reliving the high school glory days, etc. Instead, Matt founded his business, Mustaches for Matt, and surrounded himself with other encouraging entrepreneurs and survivors to begin to cultivate an uplifting community.

As a young, healthy, active personal trainer, Matt thought his sudden chronic back pains were related to weightlifting. Then one night he started vomiting blood at his girlfriend’s house. At the hospital, the doctors found a tumor in my small intestine. From an ultrasound, they discovered it was stage 3 testicular cancer, even though there were no symptoms in his testicles. Matt had RPLND surgery and later, lymph node dissection, to make sure the invasive, aggressive cancer was gone for good.

Matt began sharing his story in 2019 as a public speaker and frequent podcast interview guest. He now seeks to provide the cancer community value and support with an uplifting survivorship, after his dad encouraged him to start a community group on Facebook. Since January 2021, the lively group has grown from 100 members to over 4000.

Matt's Facebook Group: Taking Back Your Life After Cancer

Support Lee & Linda's Get Your Rear In Gear walk - https://wehavecancershow.com/Lee

Support the Child of the Month; Jocelyn - https://wehavecancershow.com/jocelyn