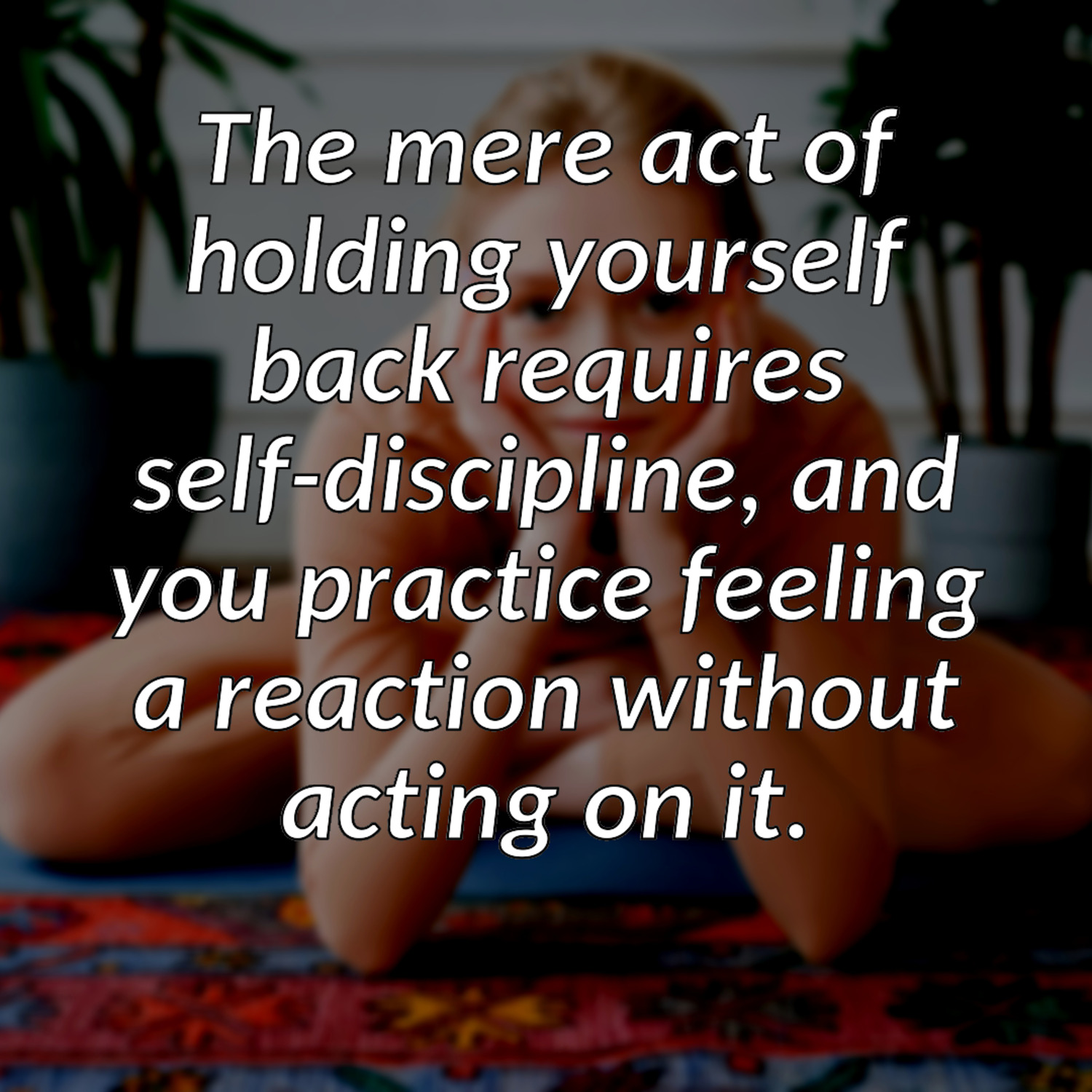 Impulses are the polar opposite of self-discipline, and they are things we must consciously train against indulging in. Oh, but its hard. Impulses are behind every subconscious thought that we struggle to rein in. How can we ever hope to combat this? Generally, we must try to interject space and time between a thought and an action. We can do this by simply counting slowly to 10, labeling your thoughts and feelings, writing down the facts of a situation, and asking yourself why five times and making sure to answer honestly.

If you can delay action on your impulses, often you can overcome them. There is something to be said for taking a breath, counting slowly to 10, and giving yourself a moment. Tell yourself to persevere for just 10 more seconds when you want to stop, and tell yourself to try something out for just 10 seconds when you are delaying starting. That’s the power of 10—the mere act of holding yourself back requires self-discipline, and you practice feeling a reaction without acting on it.

The power of 10 takes the urgency out of your urge to act immediately. Remember, that’s where your brainstem loses its grip over your actions and your prefrontal cortex steps in.

For some impulses, counting to 10 won’t suffice. For example, if you see something you want to buy but don’t really need, instead of just taking it to the register to be rung up, you can take 10 minutes, the second power of 10. This is the same type of diversionary tactic that neuroscientists have found extremely effective to battle impulse-spending and shopping; just 10 minutes drastically reduces the brain’s thirsty response for a reward. Rather than rush to purchase the item, you could leave the store for 10 minutes, and you’ll be less likely to follow through with the purchase.

Usually, an itch will disappear within seconds. A strong emotional spike will mostly dissipate within 10 seconds. You might stop seeing red in that time span. Your initial reaction just might have given way to rational thought.

After all, anyone can withstand anything for 10 seconds, right? Keep this mantra in mind and bypass the danger zone where your brainstem is in control of your actions.

Label your feelings. A person who doesn’t understand his or her emotions is more likely to act on impulse. If you can’t identify when you’re feeling angry or stressed or embarrassed, you may act in a way that just makes it worse. In essence, if you don’t realize what you’re feeling, you will be unable to stop it.

For example, suppose you have an argument with someone and you impulsively stomp off and slam the door on your way out. Those behaviors scream anger, but they likely happened so quickly, so impulsively, that you didn’t consciously think—you just reacted.

If you took a moment to realize why you want to storm out the door and how angry you are, you would have a better chance of tempering your response. Instead of leaving in a huff, say, “I think I’m feeling angry right now. I should deal with the anger first and then respond after it passes.” That takes the acute impulse out of the situation and increases the chance that things will go better once the situation is de-escalated. It also gives you an exact symptom to deal with—anger, resentment, bitterness, frustration—and from that you can find a roadmap to deal with it. That wouldn’t be possible without a label.

It’s acceptable to feel angry, embarrassed, frustrated, and ashamed. But what isn’t acceptable is to substitute these initial reactions as your response and act impulsively. When you take a pause to identify what you’re feeling, often you will realize that things aren’t quite as urgent as you thought.

Write down the facts. Writing down the facts of a situation helps you clarify what is real, what is not, and what your ideal outcome is. This is related to the power of 10 in that you are pausing to sort through the facts before you act impulsively with the brainstem. And of course, you write much more slowly than you think, so this slows your entire reactive process down. That bodes well for the prefrontal cortex and self-discipline.

Thus, when you want to quit something, when you want to delay starting something, or when you suddenly feel an urge to do something unproductive or distracting, write down the facts. Write out what the situation is, what you want to do, and what you should probably do instead. Write down your ideal outcome and how that differs from the path you would take if you gave in to your impulse.

Highlight only what is factual and leave out the rest. Don’t write down your feelings, emotions, fears, or anxieties. Keep it black and white. When you have a clear picture of “just the facts, ma’am,” you are able to look at the situation objectively and know what you should do. This not only allows you to respond in a more tempered fashion, but it helps you sort out what actually happened versus what you “thought” or “felt” happened.

For example, suppose you had a blow-up with your boss at work, and your impulse is to quit your job and look for a new one. Writing down the facts will help you clarify the situation and sort the emotion from the facts. Maybe the facts are your boss blamed you for a situation; you didn’t get to tell your side of the story; you’ve worked at your current job for eight years; you are the primary breadwinner of your family; in addition to salary, you have good benefits; and you haven’t talked to human resources to help resolve the situation. You want to punch his face and quit—that doesn’t get you to your ideal outcome. Your ideal outcome involves being heard, being more assertive, and keeping your job.

Suddenly, after taking the time to examine the facts, it’s clear what you need to do to maintain self-discipline. An impulse only exists because it is quick and fleeting; under greater scrutiny, they almost all crumble.

Ask “why” five times. A final strategy for helping to control your impulses is asking why. This tactic is all about getting to the root of your impulse and hopefully uncovering new information about yourself. You’re actually asking the same or similar question five times in a row, and you’ll be surprised to learn that each time, you just might pull out a different answer than before. You’re forcing yourself to justify why an impulse should win out over self-discipline. At the end of the process, you’ll either be able to answer why sufficiently, or you’ll come to the conclusion that it was simply an impulse not worth partaking in.

Impulses are never thought through or founded on deep analysis, so you wouldn’t expect to be able to answer why more than once or twice. Thus, only if you can answer why a few times does it pass the sniff test of importance or urgency. Practically speaking, what does this look like? Suppose you have an impulse to break your spending discipline and buy a new sweater.

It’s a great price. (This is as far as an impulse will probably carry you.)

No real reason other than wanting it…

I guess I don’t, really.

Once you’ve asked yourself why five times, in five different ways, you have distilled the main pros and cons for why you should or shouldn’t buy the shirt. And really, you’ve come up with nothing to justify the impulse. If this was really a shirt that you needed in some way, you’d be able to come up with better answers, such as “Because my other shirt ripped” or “I have a wedding coming up” or “I want to look nice for a date!” In those instances, you are not dealing with an impulse masquerading as a need—it’s an actual need.

Even if it doesn’t bring you to the point where you realize you can’t answer why five times (which is a red flag), at least it will force you to stop and think about your decisions. Whatever the case, you’ve become more mindful and more likely to be disciplined in your daily life.

Looking at each of these strategies, the common themes involve reflection, self-awareness, and pausing before responding.