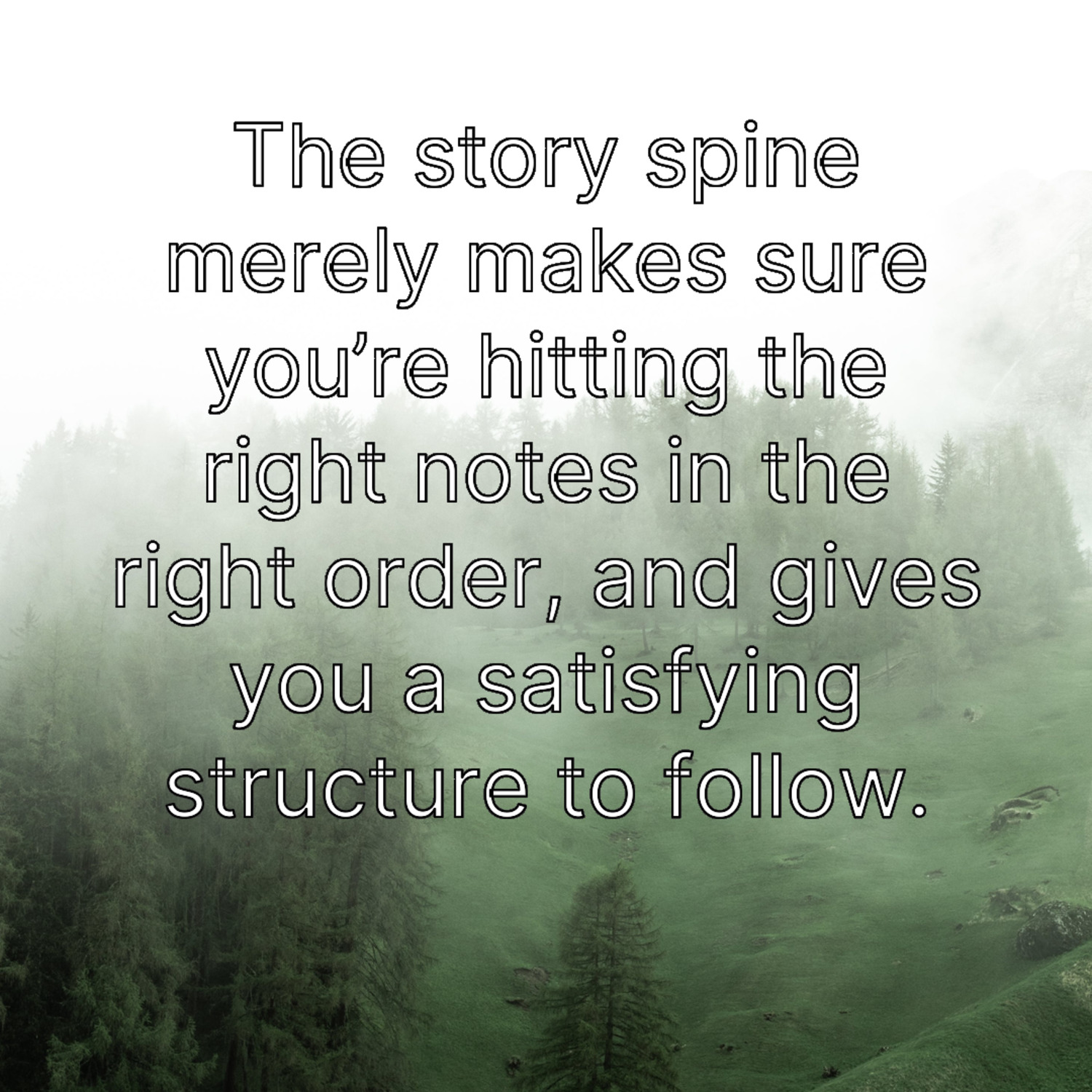 The story spine is more or less the formula for every movie that exists. It’s a simple framework that you can use in your everyday stories and conversations, because it teaches you what emotional beats exist in a story. There is the status quo, the event that kicks things off, the set of consequences for changing the status quo, the climax or resolution, and then what happens after the fact.

Think of the story spine as an upgraded and expanded version of the 1:1:1 method. It gives you the beats of a great story in a simple formula.

This technique can be credited to Kevin Adams, author and the artistic director of Synergy Theater. He teaches how the “story spine” can be used to outline a great story. This method is perfect for novelists and film makers, but you can also use it whenever you want to entertain friends with a tale that will have them riveted. Likewise, it can tell you why certain stories completely fall flat, since it shows you what crucial elements may be missing. It can be done quickly and, with practice, may start feeling automatic.

The story spine has eight elements; here’s how they go:

Once upon a time…

The start of the story. Here, you must set the context and lay out the world you’re talking about and the characters you’ll be focusing on. You establish their routine, normal reality. If you skip this part your story may seem inconsequential, or people won’t be able to make sense of the events that follow and why they matter.

More establishing of the normal and routine. Often, a character is growing bored, sad or curious, and this drives the next stages of the story. This step builds tension, and is the place you give your characters a personality and a motive for what happens next.

And here comes the big event that changes everything! One day, something different happens that completely turns your character’s world around. A stranger comes to town or a mysterious clue shows up.

There are consequences. The main character acts in response, and this sets into motion the main body of the story, the “what happened” part. Many poor storytellers will simply leap in and begin here, failing to build tension or set any context, and then discover that their audience isn’t as invested in the outcome. Like good conversation skills, good storytelling skills require pacing and gradual building of tension.

Things get more interesting or frightening, the stakes are raised, the plot thickens, other characters enter and a whole world of complications/comedy/drama opens up as the story plays out.

Good stories appeal to our love for the number three in our narratives. That’s why we have Goldilocks and the three bears, and why the hero typically faces three challenges before finally making it. Take the time to really explore the three dilemmas the character faces, and you make the resolution that much sweeter.

Does the guy get the girl? Was the world saved or did the detective find out who did it? Here’s where you reveal all. The conflict is resolved, and the story is wrapped up.

And ever since then…

You close the story as you began it—with some context. You outline here what the new normal is, given the character’s success or failure at the previous step. You could consider a moral of the story here, or a little joke or punchline. In conversation, this tells people you’re done with your story and signals them to respond.

What’s important to remember about a story spine is that it’s just that—a spine. You still need to add considerable flesh to the outline to make it compelling. The story spine merely makes sure you’re hitting the right notes in the right order, and gives you a satisfying structure to follow. Not every story will follow it exactly (it’s only a rough outline, after all) but if yours do, there’s a good chance they’ll be better received than narratives that are a bit more experimental.

As an example, consider the popular theme song for the ’80s TV show The Fresh Prince of Bel-Air. This shows that even in a quick story, it’s important to have the essential building blocks. The song starts:

In west Philadelphia born and raised

On the playground is where I spent most of my days

Chillin' out maxin' relaxin' all cool

And all shootin' some b-ball outside of the school

This covers “once upon a time” and “every day.” Context established.

When a couple of guys who were up to no good

Started makin' trouble in my neighborhood

I got in one little fight and my mom scared

Here’s the “but one day” part that changes everything.

I begged and pleaded with her day after day

But she packed my suitcase and sent me on my way… etc.

The middle portion of the song covers him begging with his mom not to go, getting on a plane to Bel-Air and then taking a cab, while slowly grasping the whole new world he’s just walked into. This is the middle of the story, the three “and because of that” portions. The final verse goes:

I pulled up to the house about 7 or 8

And I yelled to the cabbie yo homes smell ya later

Looked at my kingdom I was finally there

To sit on my throne as the prince of Bel-Air

“And finally” and “since then” are rolled into one here, and the new normal is established, with the main character happily set up in his new life. Granted, there isn’t too much conflict or tension here, but the structure is sound.

Consider someone using the story spine in a more everyday context: a dispute at work. Someone is trying to explain what’s happened clearly to an external mediator. Their story sounds like this:

“Melissa and Jake both work in the IT department, they run things together with Barbara, who’s now on maternity leave. Melissa’s been with the company for more than ten years, and Jake is new, so Melissa has been informally training him to cover Barbara’s work for the next six months, possibly longer term (there are rumors Jake will get Barbara’s job if she leaves). They’ve been working on a big project together for the last month.

“Unknown to us, Melissa and Jake had a brief relationship months back that ended badly.

“Because of that there’s been some tension in the office. There was a crucial mistake on the big project and Melissa was held accountable. But she’s since revealed to us that it was in fact Jake’s fault, and she had covered for him while they were still in a relationship. Because of this, Jake is claiming that Melissa is only blaming him now because they are no longer in a relationship, which he believes is unfair.

“Eventually, Barbara contacted the office to let them know she wasn’t returning, a condition Mark assumed would solidify his role in the office. But now there’s a big conflict as both Melissa and Jake can barely stand to work together.”

In this story, the mediator is hearing the final stages, but the “and ever since” part is yet to be decided. Can you see the steps, and how leaving any of them out or mixing them up might have made for a more confusing story?

Consider the box office hit Avatar, and how it follows the story spine:

Once upon a time there was a paraplegic Marine called Jake Sully with a traumatic past, who was just getting by in life. Every day he mourned the tragic death of his brilliant and talented brother.

But one day, he gets the opportunity to join a mission to distant moon Pandora. Because of that, he is promised surgery that will allow him to walk again in exchange for gathering info on the species that lives on the planet, the Na’Vi.

Because of that, he spends more time with them, eventually developing a real love for their world as well as for the beautiful Neytiri. Because of that love, he is unable to take part in the (soon-to-be-discovered) exploitative nature of the expedition, until finally, a full-blown war breaks out between humans and the Na’Vi. Finally, the battle is won, and Pandora is saved. And ever since then, Jake has lived in peace on Pandora.

Naturally, there are many details and elements missing here, but the spine is intact and is partly responsible for a story that is engaging and plays out in a way the audience expects. The story spine applies to any kind of story or narrative, written, spoken or cinematic, big or small. The fundamentals, once in place, can be reworked in literally endless ways.