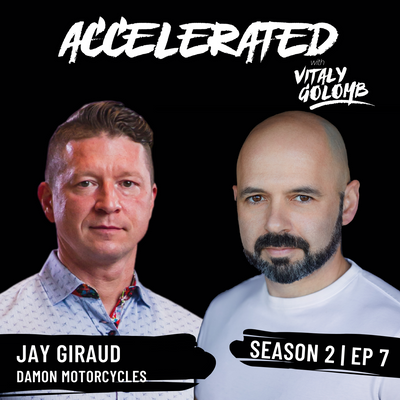 On this episode, I had a conversation with Jay Giraud, Founder and CEO of Damon Motorcycles based in Vancouver. Damon is often compared to Tesla for its innovative reinvention of an entire category. Jay found early success as a professional snowboarder and then set out on a personal mission to rid the world of oil. He first did this at REV Technologies that converted fleet trucks and military vehicles to electric and was a pioneer in vehicle to grid technology. He then founded Mojio, the most successful connected car platform in the world. He started Damon after a trip to Southeast Asia where he got reminded just how important two-wheeled mobility is to a big part of our global population and yet how dangerous it can be.

Jay Giraud is co-founder and chief executive officer of Damon Motorcycles. A serial entrepreneur, Jay has focused his efforts on redefining mobility with Damon, creating a safer, smarter and seamlessly connected motorcycle experience. Jay is the author of multiple patents and has spoken extensively about automotive, mobility and cleantech at conferences globally. In addition to his entrepreneurial efforts, Jay is an extreme sports enthusiast. He traveled the world as British Columbia’s top-ranked professional snowboarder in all four freestyle disciplines in 1998. Jay has been riding motorcycles for over 20 years and has ridden hundreds of different motorcycles on track and the road. He has a passion for sport and supersport bikes, as well as an appreciation for touring bikes. Jay has ensured the experiences of all three are in the Hypersport design.