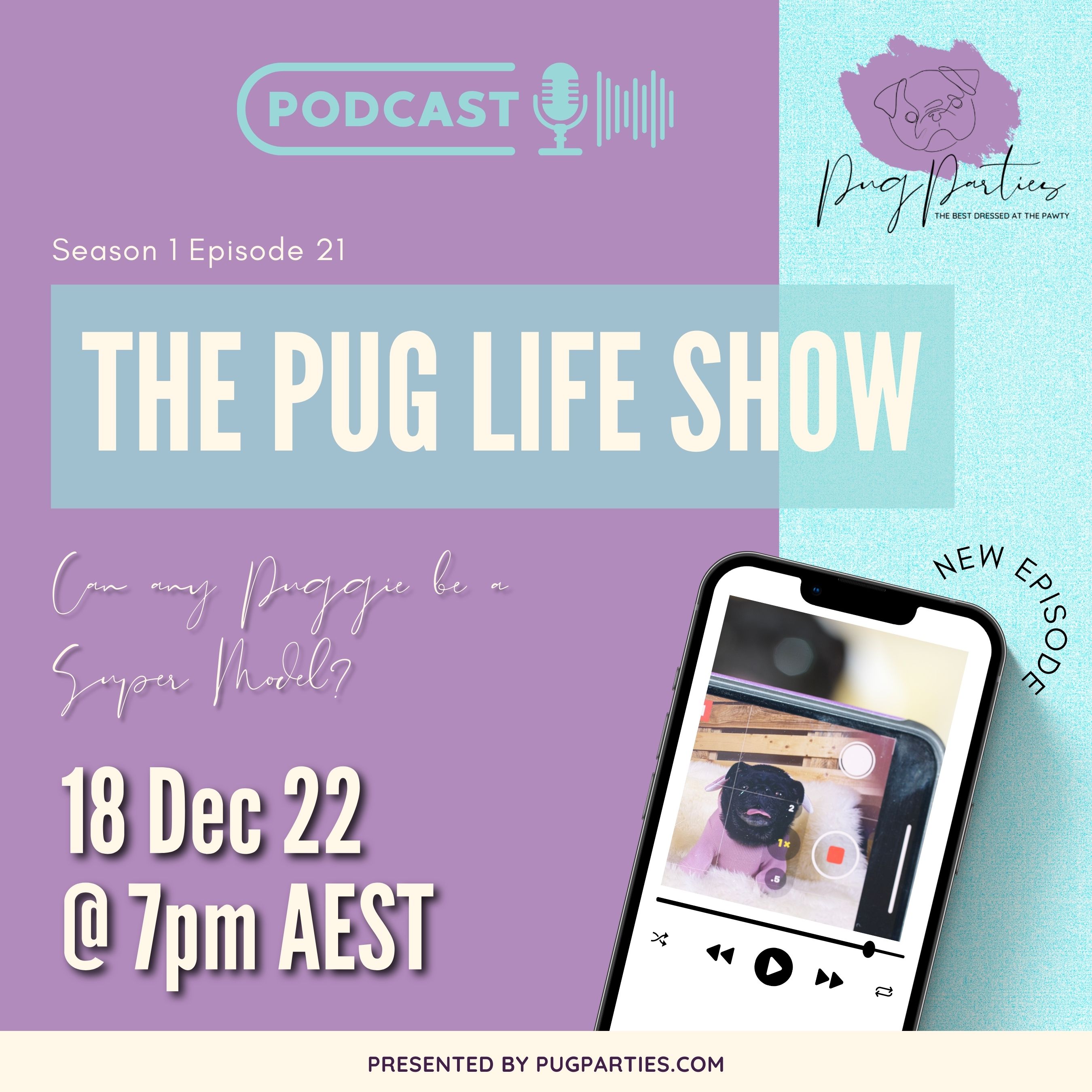 In this weeks episode I am talking to you about being a Pug Super Model and how you can prepare yourself should you ever decide to become one.

I personally think that any Puggie can be a Super Model but the decision is not actually up to me or the Pawrent, so tune in and fine out why it is so impawtant that the Puggie makes the final decision:

02:28 - The importance of introductions

04:33 - Exposing the puggies to the process a little bit at a time

If you liked the episode, or if you think it'll be useful for someone else, please leave a review over at podcasher.com

If you've got any questions or want to tell us how much you loved the Episode then let me know over at our Facebook Group "Livin' the Pug Life" (https://www.facebook.com/groups/livinthepuglife/) where Crazy Pug Ladies meet to talk all things pug.

AND, If you ❤️ all things Pug? then become a Pawty Pug by subscribing to our newsletter at http://bit.ly/jointhegrumble

Being a PAWTY PUG gets you advanced notice of our next PODCAST episode, access to one-time offers, advanced notice of new collections and sales, as well as shopping and dressing guides to name a few treats reserved exclusively for our friends.

NEXT EPISODE: This is our last Episode of the year and we wanted to say a very big 'FANK YOU' for joining us this year.

We love talking Pug with you and our Puggie Guests, and we're looking forward to continuing the snuffling (and sneezing) next year.

Don't forget to continue the conversation over on Facebook because we'll always be there saying 'Haylo', sharing pictures and stories with you, and we'll tell you know about our first Episode of 2023 too!

[07:21] Donna (host): The next tip is to know when to walk away. Even after all of our careful preparation, socialization and treaty giving, sometimes it's just not our day to get photos. Typically, a puppy will jump off the lounge we have them sitting on, or they'll dip their head, or just plain turn their backs on us. All signs that they're not interested in getting their photo taken today, or that they've had enough if they've already had one or two rounds. Sometimes a Puggy might be making a ploy for more treaties, but generally we know when they're just not feeling this part of the game. Today, we just give them a kiss and send them back out to play. Typically, we plan two to three outfits per Pug supermodel in a photo session. Some will do less, others more, and it's all determined on the day. Unlike human photo shoots, where models will go through multiple outfit fits in a session, we find that on average, a Pug will do a maximum of three outfits over about 2 hours. There's more playing than there is working for our supermodels, and that's exactly how we like it. I know that it should go without saying, but I'm going to say it anyway. Forcing your Pug to do something they don't want to do is not only futile, it's just plain mean. We value our Buggies and their happiness above everything else, including getting the porfic photo. Our next piece of advice is that smiling in photos is not a given, and natural poses are the best. I love seeing Rosie and charles smiling at me with their beautiful eyes and their wrinkles looking up at me, hoping for one more treaty. But the simple fact is that Pugs don't smile all the time. They have the most expressive faces and they use every one of them to very good effect when they choose to. We prefer to show photos on our website and social media accounts that show every expression of Puggy has, including the grumpy ones. And speaking of grumpy, Charles is a naturally grumpy old man and most of these photos are of him looking like a grumpy old man. Whereas Rosie, for instance, is very inquisitive and will usually wear a serious I'm listening face or a head tilt that says, what are you talking about, Mum? There's nothing wrong with either expression and to be honest, all expressions should be celebrated on film as much as smiling is. I recommend getting to know your Puggies expressions and immortalizing them on film. You'll be happy you did when you're remembering them and their personality in the future, it will sound like I'm telling you something obvious, but practice really does make for perfect photos. The more your Puggy sees a camera or a phone and associates it with a bit of fun, they'll begin to forget it's there when you're trying to get those great action shots. And if you're looking to get them to sit still long enough to get a nonblurry one, they'll figure out the equation of camera coupled with the sitcommand equals sit still, look gorgeous and there'll be a treaty and a cuddle at the end. I'd also mention that for every infocused, eyes open and FaceForward photo of your puppy you get, you'll take 100 blurry tongue out looking left or right or mid sneeze photos. It's all part of the fun. And thankfully, with a digital camera, you can just delete them or keep a few as happy reminders of the fun you both had trying to get the really great one. We keep a few of our blooper photos for that very reason. And in the end, the most important thing to remember is that any Puggy can be a supermodel professional or amateur. And as long as they think it's a fun game that they get to play and stop when they've had enough, you'll get the best photos that you'll be sharing with friends and family for years to come. Now it's your turn to talk Pug. I'd love to know what you do to get your Puggy to sit still long enough to take a nonblurry photo. So please share your stories with us over in our Facebook group living the Pug Life. Thank you very much for listening to.