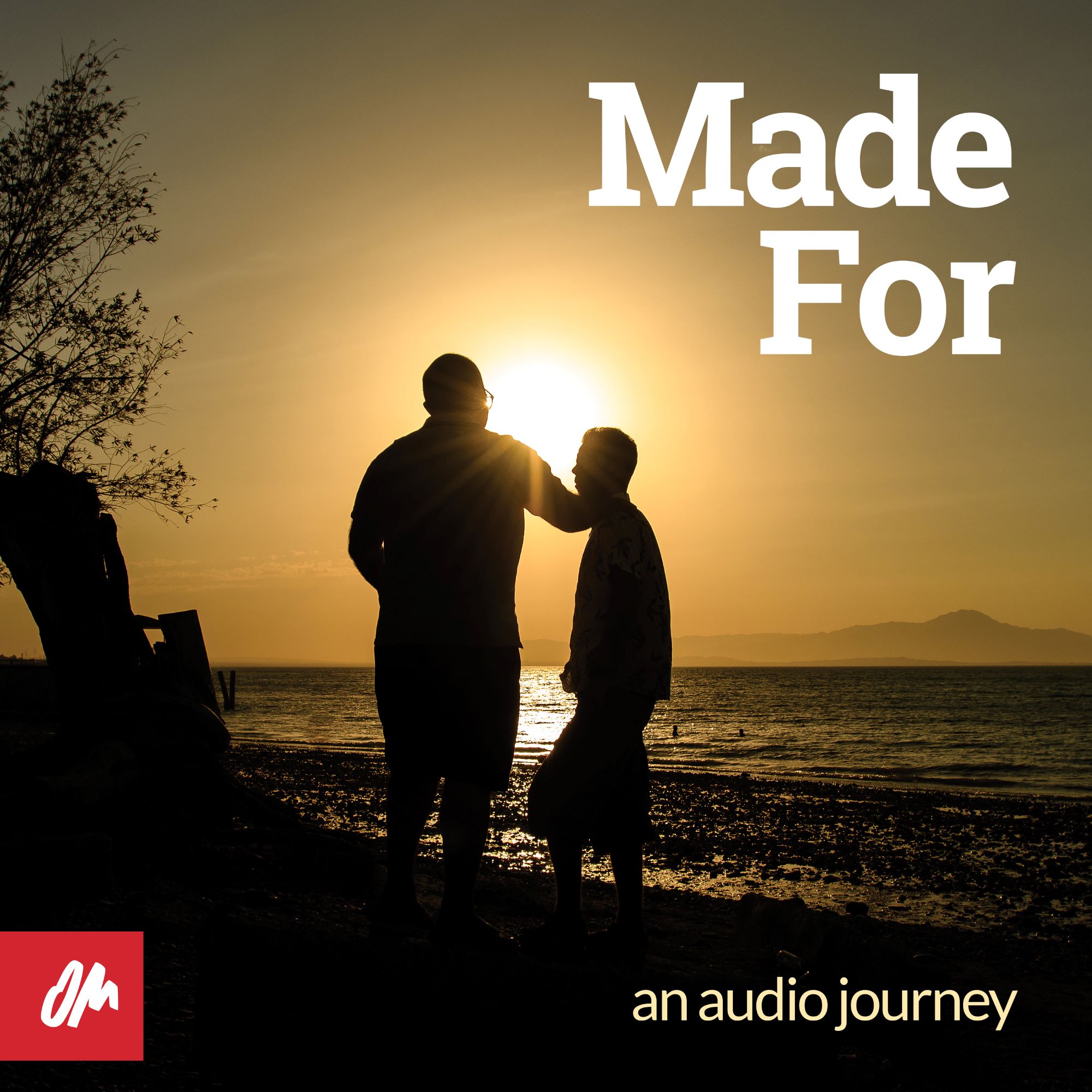 As a follower of Christ, you know this story. God made everything. His hand touched and moulded everything, and it was good. So, where do we fit into the story? You, me ... Where do we fit in? Who are we in the eyes of God? Who are you?

Full Transcript below, or at missiongap.org/podcasts

Hosted by: Geoff Peters - Geoff is a huge fan of coffee and market research, but what really gets his heart pounding is inspiring people to share God’s love with the world. He is a deep thinker driven to understand the fears, concerns, beliefs and motivations of Christians better. Through the Mission Gap Project, Geoff hopes to encourage believers to step beyond the safety of their comfort zones and love others for Christ.

Transcript: Series 1, Episode 1: Who am I in the eyes of God?

As a follower of Christ, you know this story. God made everything. His hand touched and moulded everything, and it was good. So, where do we fit into the story? You, me ... Where do we fit in? Who are we in the eyes of God? Who are you?

During this series, we're going to hear from a variety of people who are currently working as a part of God's plan for the world in some capacity, in countries all over the world. Their experiences are unique. Let's start with Glenn. He's a pastor and author originally from Malaysia and now serving in the U.S. I asked Glenn, as a pastor, how he helps people understand, how we as individuals are made in the image of God.

Yes, so many times when people talk about the image of God, Geoff, they refer to our intellect, or a sense of consciousness. And all of those things are certainly, surely part of it. But in the world of the scripture, in the world of the Old Testament, I went to say that human beings are made in the image of God, that has immediate echoes of a king and an empire, because you didn't have media. And so when you wanted a neighbouring people to understand who the dominant monarch was of that region, you would set up images of that monarch and you'd say, “This is the ruler. This is the landlord. This is the person who rules this region. And you may not have heard of him, and you may not have seen him because he's 50 miles away, but this is his image.”

Genesis 1:27, “Then God said, ‘Let us make man in our image, after our likeness to rule over the fish of the sea and the birds of the air, over the livestock and over all the earth itself, and every creature that crawls upon it.' So God created man in His own image. In the image of God, He created him. Male and female, He created them.”

Now, this is also an immediate contrast to Mesopotamian origin stories. Because when you read some of the other ancient stories, human beings were made as the servants of the gods. Basically, the gods didn't want to do certain jobs. And they said, “Let's just make some creatures and they can do the grunt work.” Well, in Genesis, the script is flipped, “No, no, these are people who are going to rule." Genesis 1:27, "Let us make them in our image and let them have dominion, let them rule.” So, image is connected to rule and the King's kingdom being extended right away. But there's another theme at work in this, and that is the story of Genesis 1 and 2. And lots of people have done work on this. John Walton at Wheaton, Greg Beale, to say that the Genesis story is the story of a temple being built in creation, where it's kind of a cosmic temple.

And what would happen is the last item to be set in place in an ancient temple dedication story, was the priest. So, you'd get all the preparation bits. And then the last detail was, and now who's the priest. Well in the Genesis story, the fact that human beings are made last is not simply to say we're the crown of creation, or you saved the best for last and all of that. But it is to say, and now God has set us as priests within his cosmic temple. So, you put that together to be an image bearer is to be royalty and priesthood, or as Exodus says, as Peter picks up on, as revelation says, "A Royal priesthood."

This is Decio de Carballo. Decio is originally from Brazil, but now he and his family live in Puerto Rico. I asked Decio what he thought of this idea that humans are the image bearers of God, that we are intricately designed as expressions of His character and creativity. Here's what he had to say.

Yeah, it has come to mean that God has made us as close to Him as we can be. He's made us for Himself. Just to give one detail about that, my wife and I are reading some books about neuroscience and a new branch of that called neuro theology. One of the books is called, The God Shaped Brain. It's a great book, I'd highly recommend it. In a recent class that my wife was taking and I was overhearing her teacher. He said, "Our brains were created for Jesus." That was very catchy for me. It called my attention, just to help us begin to think about our bodies, the parts of our bodies, the ways they were made and how they're designed in a way that bring us to relate to God as we seek Him, as we walk with Him. They're just so beautifully designed.

They work so beautifully. They function so well that we actually manifest God in some way through how we live, or if we want to manifest God in all that He is, our bodies are designed for us to do that, to glorify God. That's just an example. A lot of specialists and people that have studied this topics really well, talk about when we follow God's design, for example, in relating well with other people, forgiving people, loving people. There are things that happen in our brains that build new circuits, create new connections, build new vision, build new hope. Then they lead us to think of our lives in a positive way, that our lives can be abundance, can be better lives. How can we even go beyond forgiveness, or beyond that hope, beyond this things, and even have a really joyful life. Not just a basic existence, God promises us an abundant life full of joy, full of peace.

It doesn't mean that there are no difficulties in circumstances, but even in the middle of those, we can enjoy peace and a clarity of mind and clarity of direction. And that's the opposite of what happens when we are all the time living in conflict and in hopelessness and unforgiveness, in broken relationships. And so what that causes, is it causes our brains to become dysfunctional circuits in our brains, begin to be destroyed. And that just furthers the process of our bodies not being able to respond, our minds not being able to respond in a proper way to the challenges and circumstances of life.

And lastly, here's Katherine Lee, she's a wife and mother and lives in the United States. I asked her to reflect on her understanding of humans as image bearers of God and how parenthood has added a new perspective to this. Here's Katherine.

So, when I think about the image of God, I think about, of course, well ... What image would I be reflecting? God's image, what is that? Who is that God? And I think of a sermon I heard a number of years ago where a pastor said, "Why did God do it? Like why did he create the world? Like why, the big why?" And his phrase was, "Because He didn't need to, He just wanted someone to bless." I think parenthood has really helped me understand God better and also understand the way that He looks at us as His beloved creation. And you think of the creation account and it's God hovering over the waters. And that language to me is like creating in delight. It feels very much like how a parent would dote over a crib, right?

Like you're enjoying the making, like you're enjoying watching this thing unfold. And I identify so much and understand God so much because I feel that way about my own kids, even though they drive me nuts, sometimes. I think that you see that bit of God's character in the prophets when He's like, "Ah, y'all are driving me crazy, but I'm covenanted to you. I am committed to you and I'm faithful to you." And I think that sense of deep love, not because of anything that I've done. I didn't ... My child didn't do anything when she was born. She just simply exists and I love her. That deep sense of belonging has been transformative to me, because I think my tendency is to be someone who tries to earn favor and it's just exhausting and it's just not possible when you think of, we're trying to earn God's love. Wow, you'd have to be pretty impressive to capture His attention, but He just simply wanted someone to bless and so the creation and humanity comes about.

You've been listening to, the "Made For" podcast series, part of the Mission Gap Project from Operation Mobilization with me, Geoff . To find out more, go to missiongap.org. And if you would please rate this podcast in your app store and leave a comment, so others can more easily find the series. In the next episode ...