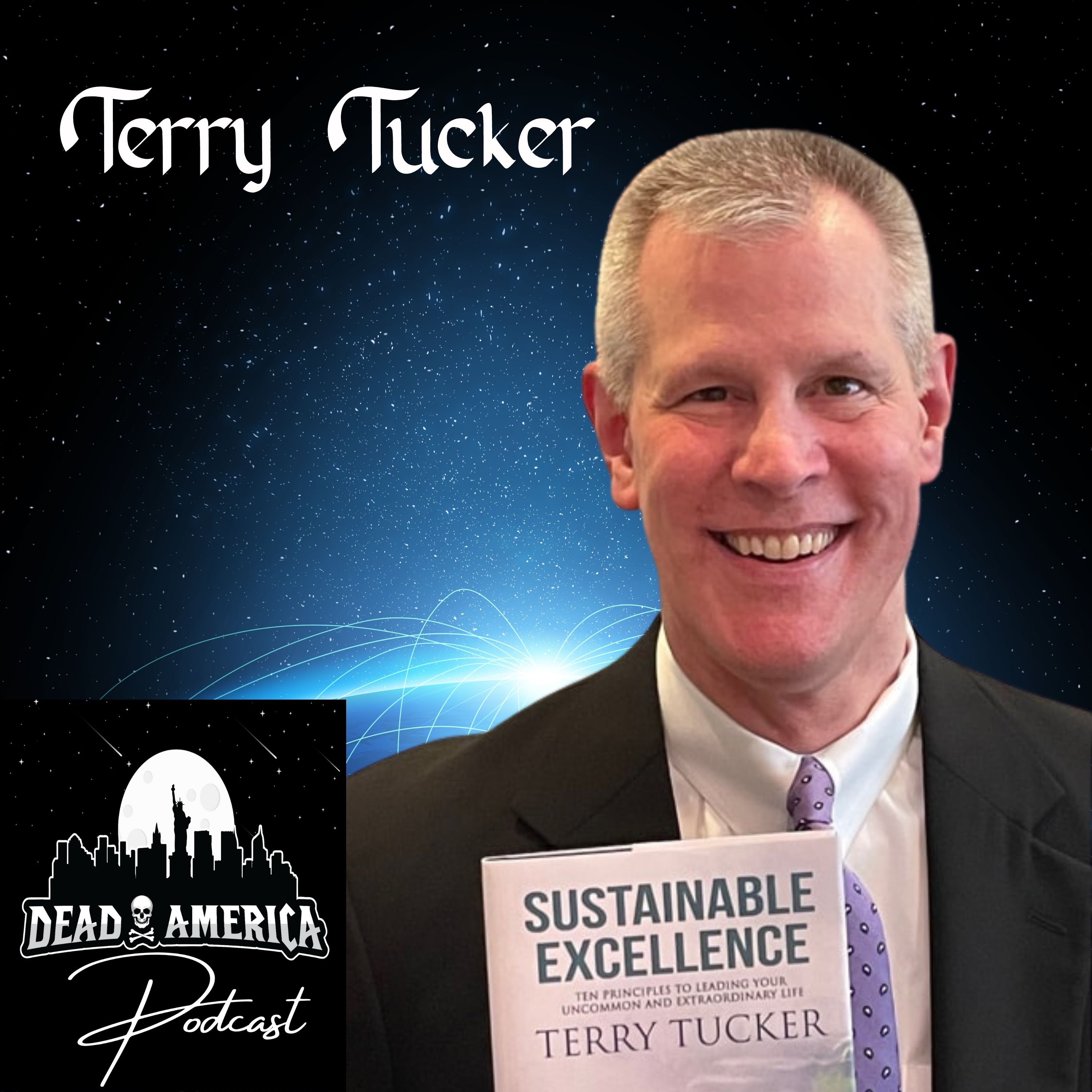 The views expressed on Dead America podcast are the views of the person expressing themselves.

We are here for entertainment only for any Medical or Mental Health concerns you might have. We always recommend seeking local listings for a qualified provider in your area.

We will always consider other points of view on any subject. We do not necessarily agree with our guests all of the time. We value everyone. All of our guests deserve respect and a platform to voice concerns.

Make sure you check our giveaway page for some great giveaways.

There is a song that Tim McGraw sings. It's titled, live like you are dying. In that

song. Part of the lyrics goes, quote, someday, I hope you get the chance to

live like you were dying. Unquote. Today's guest, Terry Tucker. Well, he is

what that song quotes. Terry Tucker has terminal cancer and he has to live

every day. Like he is dying. The incredible strength that this man just has

within himself during each day, knowing the inevitable is soon to approach.

It's one of the things that I found fascinating about Terry Tucker. how strong

he is facing what he knows is yet to come. We all face death, but not like

Terry. In the discussion I had with Terry I found 23 highlights of interest in our

topic. Let's cover them. Number one, the introduction of Terry Tucker. Number

two, we found out how real Terry is through his introduction. Number three, we

found out Terry's father and his grandmother, both died from different types of

cancer. Number four, Terry has had many jobs in his life. from working at

Wendy's in the marketing department to a SWAT hostage negotiator number five.

formed space force. Number six. We found out Terry had knee surgery at a young

age and still played basketball. Being on the varsity team at the same time as

being on the JV team. Number seven, we found out Terry played basketball

against Michael Jordan and other big names in basketball. Number eight. Terry

tells us about his secret and how he keeps going. The way he does this is tried

better. Number nine, Terry tells us about his first time knowing about his

cancer. Number 10. Terry's doctor informs him that he has never seen this rare

type of cancer before in his practice. Number 11 we learn Terry sought

treatment from MD Anderson in Houston, Texas for his cancer. Number 12. We

learn about the drug Interferon that they placed Terry on. number 13. We found

out about how the drug had Terry dealing with a high fever of up to 108 degrees.

It even put him in the ICU. Number 14. Terry tells us how important faith

family and friends truly are. Number 15 Terry tells us about his family truths.

Number 16 Terry lets us know he is not Superman, and he does have his bad days.

Number 17 Terry talks about the difference between pain and suffering. Number

18. Terry talked about facing his death and planning for his death upfront.

Number 19. Terry tells us he is curious about what is on the other side of this

life. Number 20. Terry talks about choosing the right people to be around and

the right people to listen to number 21. In the end, it's what you do that

matters. Number 22. Terry tells us his parents are the heroes that he truly

looks up to. Number 23. Terry talks about his training for SWAT. We talk about

so much more in this very interesting interview. Terry Tucker is an amazing

man. And I hope you go out and purchase his book, sustainable excellence 10

principles to leading your uncommon and extraordinary life. I do think Terry

Tucker for giving me the honor to do this interview with him.

I use my 4 Truths to guide the decisions I make in my life. These 4 Truths are:

1. Control your mind, or it will control you.

2. Embrace the pain and suffering we all experience in life and use it to make you a stronger and more determined individual.

3. What you leave behind is what you weave in the hearts of other people.

4. As long as you don't quit - you can never be defeated.

In many ways, I believe I am just like any of the billions of people existing on this planet.

I have reinvented myself frequently over my professional career. After I graduated from college at The Citadel (where I played NCAA Division I basketball), I was employed in the Marketing Department at the corporate headquarters of Wendy’s International in Dublin, Ohio. From there, I worked in hospital administration for Riverside Methodist Hospital in Columbus, Ohio. After getting married and moving to California for my wife's job, I became the Customer Service Manager for an academic publishing company in Santa Barbara. After our daughter was born and we moved to Cincinnati, Ohio, I became a police officer with the Cincinnati Police Department, where I was a SWAT Hostage Negotiator. Following a family relocation to Texas, I started a school security consulting business and coached high school girls basketball in Houston. Each time I took on a new job, I had to develop new skills and faced different challenges. There was always a significant learning curve with every new position.

But my greatest challenge began in early 2012 when I was diagnosed with a rare form of cancer called Acral Lentiginous Melanoma, which presented on the bottom of my foot. By the time the melanoma was detected, it had metastasized to a lymph node in my groin. Because my cancer is so rare (only about 6,500 people are diagnosed with this form of malignancy in the U.S. each year), I was treated at the world-renowned MD Anderson Cancer Center. I had two surgeries to remove the tumors, and after I healed, I was put on a weekly injection of the drug, Interferon, to help keep the disease from coming back.

I took those weekly injections for four years and seven months before the Interferon became so toxic to my body that I ended up in the Intensive Care Unit with a fever of 108 degrees. Fortunately, expert medical care saved my life.

The Interferon gave me severe flu-like symptoms for two to three days after each injection. I lost fifty pounds during my therapy, was constantly nauseous, fatigued, and chilled, my ability to taste food significantly diminished, and my body constantly ached. This misery went on for over 1,660 days!

One thing I learned during all my pain and suffering is that you have two choices. You can succumb to the debilitating discomfort and misery, or you can learn to embrace it and use it to make you a stronger and better human being. I chose the latter.

There were times I felt so poorly and was in so much agony that I prayed to die. Each day was a struggle to use my mind to override my body's apathy and distress.

I realize pain and discomfort can beat you to your knees and keep you there if you let it. But I also came to appreciate that I could use my hurting and anguish to make me stronger and more resolute.

I was no better at dealing with pain and discomfort than the next person. But every day, I found a way to survive, with the knowledge that I would need to do it again the following morning.

I recently wrote a book, entitled Sustainable Excellence, Ten Principles to Leading Your Uncommon and Extraordinary Life, to help people find and live their uncommon and extraordinary life. The ten principles outlined in the book will provide the bedrock necessary to form the foundation of unshakable beliefs and dedicated behaviors to reinforce your attitude, no matter how much pain you must endure or how many obstacles you must overcome. My hope is that people who read the book will lead a life of significance, as well as a life of success.

Unfortunately, my cancer experience hasn't ended with me conquering my disease. The melanoma that had plagued me for over six years returned in 2017, and my only treatment option was the amputation of most of my left foot in 2018. The cancer reemerged again in 2019, requiring multiple operations. In February of 2020, an undiagnosed tumor in my ankle fractured my tibia. My only remedy was the amputation of my left leg above the knee. I also have tumors in both of my lungs. Recently, my doctor advised that more than likely, I am coming to the end of my life.

But I refused to be a victim of this malignancy. I vowed to continue my fight. I knew the only way cancer could win is if I gave up or gave in to the disease, or it killed me.

In addition to my faith, I use my 4 Truths to guide the decisions I make in my life. These 4 Truths are:

1. Control your mind, or it will control you.

2. Embrace the pain and suffering we all experience in life and use it to make you a stronger and more determined individual.

3. What you leave behind is what you weave in the hearts of other people.

4. As long as you don't quit - you can never be defeated.

I chose the title, Motivational Check, for a simple reason. When I was a recruit in the Cincinnati Police Academy, it was a phrase any of our classmates could shout if they needed encouragement, motivation, or support. The class's response was to answer with a loud “84,” signifying our Recruit Class number and letting the person needing the reassurance know that we were all there for him or her.

I understand what it is like to fight for your life and one thing I’ve learned is that as long as you don’t quit, you can never be defeated.

However, I came to understand the responsibility for altering your life is entirely up to YOU. Whining, complaining, and blaming others for your plight will not enhance your experience. Motivation alone will not cause you to progress. YOU have to want to make the change and commit to it every minute of every day. There are no days off when attempting to make significant and lasting improvements.

Just as fire strengthens metal and lifting weights until exhaustion grows muscle, use the pain and discomfort you are experiencing to harden your mind and make you a better and more determined individual. Keep fighting no matter how many setbacks you have or how bad you feel. Believe in yourself and know that there will be light at the end of your journey one day.

Remember, YOU are never out of the fight, no matter how often you fail or how many obstacles you face. Stay positive and keep moving forward!

Castro
Our Giveaways! Download our App! Be an insider.