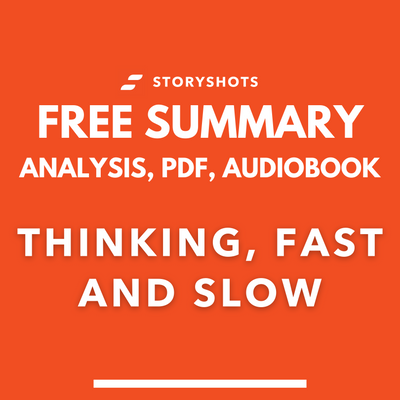 Life gets busy. Has Thinking, Fast and Slow been gathering dust on your bookshelf? Instead, pick up the key ideas now.

We’re scratching the surface here. If you don't already have the book, order it here or get the audiobook for free to learn the juicy details.

Get the PDF, full text, and animated versions of this analysis and summary in our free top-ranking app: https://go.getstoryshots.com/free

Daniel Kahneman is Professor of Psychology and Public Affairs Emeritus at the Princeton School of Public and International Affairs, the Eugene Higgins Professor of Psychology Emeritus at Princeton University, and a fellow of the Center for Rationality at the Hebrew University in Jerusalem. Dr. Kahneman is a member of the National Academy of Science, the Philosophical Society, and the American Academy of Arts and Sciences. He is also a fellow of the American Psychological Association, the American Psychological Society, the Society of Experimental Psychologists, and the Econometric Society. In 2015, The Economist listed him as the seventh most influential economist in the world. In 2002, Kahneman was also awarded a Nobel Prize in Economic Sciences.

Thinking, Fast and Slow provides an outline of the two most common approaches our brains utilize. Like a computer, our brain is built of systems. System 1 is fast, intuitive, and emotional. Daniel Kahneman encourages us to move away from our reliance on this system. System 1 is the most common source of mistakes and stagnation. In comparison, system 2 is a slower, more deliberate, and logical thought process. Kahneman recommends tapping into this system more frequently. As well as this advice, Kahneman provides guidance on how and why we make our decisions.

System 1 includes all capabilities that are innate and generally shared with similar creatures within the animal kingdom. For example, each of us is born with an innate ability to recognize objects, orient our attention to important stimuli, and fear things linked to death or disease. System 1 also deals with mental activities that have become near-innate by becoming faster and more automatic. These activities generally move into system 1 because of prolonged practice. Certain pieces of knowledge will be automatic for you. For example, you do not even have to think about what the capital of England is. Over time, you have built an automatic association with the question, ‘What is the capital of England?’ As well as intuitive knowledge, system 1 also deals with learned skills, such as reading a book, riding a bike and how to act in common social situations.

There are also certain actions that are generally in system 1 but can also fall into system 2. This overlap occurs if you are making a deliberate effort to engage with that action. For example, chewing will generally fall into system 1. That said, suppose you become aware that you should be chewing your food more than you had been. In that case, some of your chewing behaviors will be shifted into the effortful system 2.

Attention is often associated with both systems 1 and 2. They work in tandem. For example, system 1 will be driving your immediate involuntary reaction to a loud sound. Your system 2 will then take over and offer voluntary attention to this sound and logical reasoning about the sound’s cause.

System 1 is a filter by which you interpret your experiences. It is the system you use for making intuitive decisions. So, it is undoubtedly the oldest brain system as it is evolutionarily primitive. System 1 is also unconscious and impulse-driven. Although you might feel system 1 is not having a significant impact on your life, it influences many of your choices and judgments.

System 2 comprises a range of activities. But each of these activities requires attention and is disrupted when attention is drawn away. Without attention, your performance in these activities will diminish. Significantly, system 2 can change the way system 1 works. For example, detection is generally an act of system 1. You can set yourself, via system 2, to search for a specific person in a crowd. This priming by system 2 allows your system 1 to perform better, meaning you are more likely to find the specific person in the crowd. This is the same process we utilize when we are completing a word search.

Because system 2 activities require attention, they are generally more effortful than system 1 activities. It is also challenging to simultaneously carry out more than one system 2 activity. The only tasks that can be simultaneously completed fall on the lower limits of effort; for example, holding a conversation while driving. That said, it is not wise to hold a conversation while overtaking a truck on a narrow road. Essentially, the more attention a task requires, the less viable it is to be completing another system 2 task simultaneously.

System 2 is younger, having developed in the last several thousand years. System 2 has become increasingly important as we adapt to modernization and shifting priorities. Most of the second system’s operations require conscious attention, such as giving someone your phone number. The operations of system 2 are often associated with the subjective experience of agency, choice, and concentration. When we think of ourselves, we identify with System 2. It is the conscious, reasoning self that has beliefs, makes choices, and decides what to think about and what to do.

StoryShot #3: The Two Systems Support Each Other

Based on the two systems’ descriptions, it could become easy to imagine that the systems occur one after the other. Kahneman explains that these two systems are actually integrated and mutually supportive. So, almost all tasks are a mix of both systems and are complementary. For example, emotions (system 1) are crucial in adopting logical reasoning (system 2). Emotions make our decision-making more meaningful and effective.

Another example of the two systems working in tandem is when we are playing sport. Certain parts of the sport will be automatic actions. Consider a game of tennis. Tennis will utilize running, which is an innate skill in humans and is controlled by system 1. Hitting a ball can also become a system 1 activity through practice. That said, there will always be specific strokes or tactical decisions that will require your system 2. So, both systems are complementary to each other as you play a sport, such as tennis.

Issues can arise when people over-rely on their system 1, as it requires less effort. Additional issues are associated with activities that are out of your routine. This is when systems 1 and 2 will become conflicted.