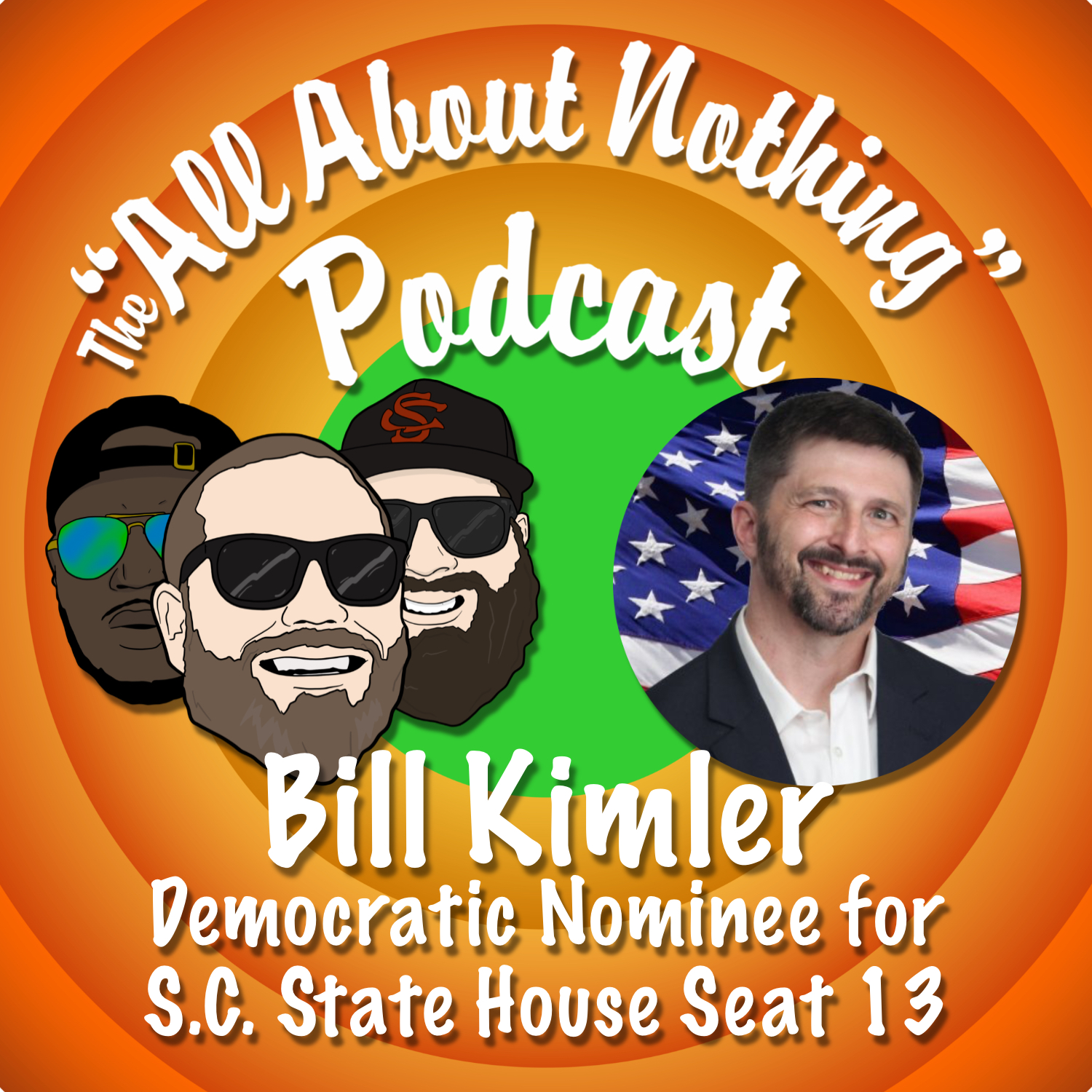 We discuss the district that Bill will represent after his election in November, as well as the issues that his campaign is running for office on.

Thank you for listening and please consider a donation of support to the Kimler campaign! Visit ActBlue!

All this and more!

The show is recorded live from the Maddie Johnson Podcast Studio at G.O.T Sounds Studio in Columbia South Carolina and is engineered and produced by Nique The Geek.

Special thanks to Muff the Producer, DJ Lonzo, Zac King and you, our listeners.

Please email us; theshow@theallaboutnothing.com or call and leave a message at (803) 672-0533! We want to hear your feedback! We might even drop it on the show.

As always, head over to The All About Nothing: Webpage for information about the show, links to social media and merchandise!

And if you find that the time between episodes is too much to bear, you can check out one of our #PartnerPodcasts.

Zac and I host What The Pod Was That with Cari Simmons, available on most of your podcast platforms. You can visit whatthepodwasthat.com for links and details.

Status Macabre, hosted by Cari Simmons and Chrissy Wilson is a fascinating deep dive into True Crime, and is available on most of the podcast platforms as well, find details at statusmacabre.com.

As well you check out our own DJ Lonzo’s Top 5 Hosted by Trent Clark, available on most of your podcast listening platforms.

Thank you for supporting this show and our Podcast Partners!

The All About Nothing: Podcast is a member of the G.O.T. Podcast Network and a product of Barrett Gruber Entertainment & Media!

Do you enjoy listening to the show and want to promote to our listeners?

Advertise with The All About Nothing: Podcast!

Give us the opportunity to advertise your business and brand. You can give us a call and leave a message (803) 672-0533 or email theshow@theallaboutnothing.com.

Let our show work for you.

FAIR USE COPYRIGHT NOTICE The Copyright Laws of the United States recognize a “fair use” of copyrighted content. Section 107 of the U.S. Copyright Act states:

“NOTWITHSTANDING THE PROVISIONS OF SECTIONS 106 AND 106A, THE FAIR USE OF A COPYRIGHTED WORK, INCLUDING SUCH USE BY REPRODUCTION IN COPIES OR PHONO RECORDS OR BY ANY OTHER MEANS SPECIFIED BY THAT SECTION, FOR PURPOSES SUCH AS CRITICISM, COMMENT, NEWS REPORTING, TEACHING (INCLUDING MULTIPLE COPIES FOR CLASSROOM USE), SCHOLARSHIP, OR RESEARCH, IS NOT AN INFRINGEMENT OF COPYRIGHT.”

This Video/Audio in general may contain certain copyrighted works that were not specifically authorized to be used by the copyright holder(s), but which we believe in good faith are protected by federal law and the fair use doctrine for one or more of the reasons noted above. If you have any specific concerns about this usage, or our position on the Fair Use Defense, please contact us at TheShow@TheAllAboutNothing.com so we can discuss amicably. Thank you.