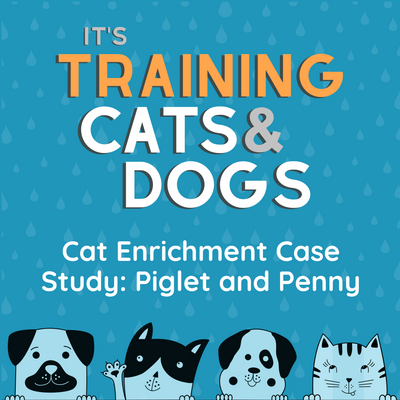 In this episode we discuss:

Our cast of characters: Piglet and Penny

Penny is a 9-year-old, submissive dog with a lot of fears and quirks. She's successfully lived with other cats with no prior problems.

Piggy was a shelter cat, described as calm and a “lovebug” who was suffering from a previous injury. Once healed, his aggression towards Penny started.

They needed to be separated at all times.

Identifying the behaviors to focus on

When did this happen?

Why was it happening?

Goal 1: channel the undesired behavior in situations we have more control over

Goal 2: get the physical need met as a result of other "acceptable" behaviors (or for free)

Goal 3: needs to be easy to fit into a busy day

Da Bird: adjusted technique and timing. Already using Da bird but offered it preemptively rather than a response. He jumped, scratched, and climbed on furniture during play – but his humans were OK with those "extra" behaviors.

Stuffed toys always in the living room: both Piggy and Penny now play near each other with separate toys.

Reinforcing any non-biting/stalking Penny behaviors: this led to relaxation on either side of the rug or couch with no problems.

What didn’t work as well?

Kitty bowling: not an option because Piggy ate primarily wet food (and he has a weight problem)

Buying any more toys: they already had plenty

Who’s in this episode?

Castro
Check out the episode extras! Join the Cat and Dog Coexistence Club!